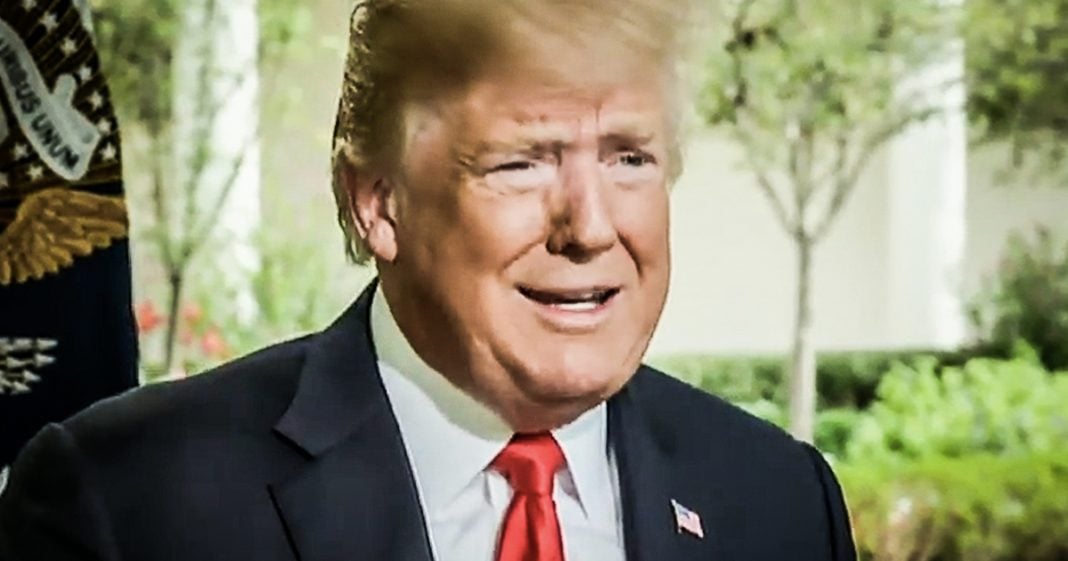 Fox News wanted to give Donald Trump the chance to talk his way out of all the damaging news of the week, but instead, he ended up admitting to committing a federal crime. He and his followers are trying to misdirect the public about the payoffs for his affairs, but his talking points aren’t going to hold up in a court of law and it seems like he knows this. Ring of Fire’s Farron Cousins discusses this.

Donald Trump had a pretty rough Tuesday, this week. As they always do, FOX News wanted to give the president the chance to come out, and kind of talk his way out of the fact that his former lawyer just implicated him in a felony. Unfortunately for FOX News, they forgot that Donald Trump is a complete moron. Rather than talking himself out of trouble, he somehow managed to make it so much worse. Take a look.

Ainsley Earhardt: Did you know about the payments?

Okay. In case you were not aware, let me just say it flat out. Donald Trump, on FOX & Friends, FOX News, just admitted to committing a felony. That is what just happened in that clip. He admitted that he paid the money. That’s the felony. That is a felony campaign finance law violation.

Let’s address the bigger issue, here. Even bigger than, yes, the president admitting to a felony. That is the misdirection that Donald Trump and his supporters, and the folks at FOX News, and the supporters he still has in Congress … this is what they’re all doing, they’re trying to say the money didn’t come out of the campaign fund. It didn’t come out of the campaign fund, so, how was it illegal?

That’s not what it is, folks. It is an in-kind campaign contribution. Any expenditure made by a human being, to benefit a political campaign, is an in-kind contribution, and, therefore, is still subject to campaign finance limits. You can not give over a certain amount. Those payments that Michael Cohen made, that Donald Trump just admitted he reimbursed him for, are in-kind contributions that far exceed the legal limit. Yes, it is a felony. Yes, Donald Trump just admitted to it. Yes, there’s actually another felony that most people missed, that he also just admitted to.

That felony happens to be omitting these payments on his financial disclosure forms. Norm Eisen from Citizen for Responsibility and Ethics in Washington, pointed that out yesterday, after Trump did the interview. Everybody was focusing on him saying, yes, he made the payment, but they missed the fact, that the second felony that he admitted to by saying that, was the omission of that on the financial disclosure forms.

So, FOX News doing their best to try to help the president, thinking they can let him talk his way out of this, and instead, just made it so much worse for the man. I have no shred of sympathy for anyone involved in that … not the producers, or the host, and even Trump, himself. They think we’re so stupid that we don’t know what an in-kind contribution is. Either they don’t know what it is, or they’re hoping that they can say that the money didn’t come out of the campaign enough times, that the rest of us will just finally give up, and say, “All right. Fine. You win.”

That’s not gonna happen. These laws are pretty clear. They’re pretty easy to understand. Even a moron like Donald Trump knows that what he is saying, is not what the actual issue is.