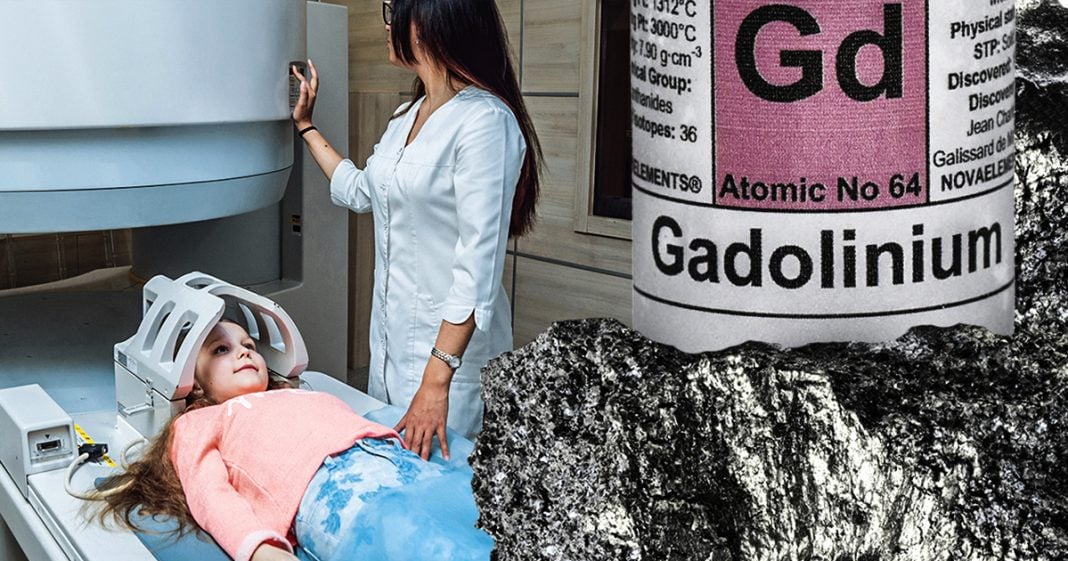 Each year in the United States, more than 10% of the population will undergo an MRI scan, and a good portion of those will include the use of a contrast agent that contains the element gadolinium. This element can be highly toxic to human beings, and it has now been linked to a serious condition called nephrogenic systemic fibrosis (NSF.) Ring of Fire’s Farron Cousins speaks with attorney Kim Adams about the dangers of this compound and the lawsuits that have arisen as a result of patients who have suffered injuries from it.

Click here to learn more about the dangers of Gadolinium.

Farron Cousins: Each year, close to 11% of the entire population here, in the United States, will undergo an MRI scan. And a lot of those MRI scans use some kind of contrast agent, which allows doctors, radiologists, to get a better look at what’s happening inside of the patient. But some of those contrast agents use a rare-earth chemical, element really, known as gadolinium, and that gadolinium can cause huge problems in the human body.

I have got Kim Adams, attorney, with me right now to help tell us the story of gadolinium and what is happening to patients all over this country. Kim, these gadolinium lawsuits, there was a spade of them, actually, back about 10 years ago, really. The ones that have come up today are similar, but they’re not identical. What are we looking at today in terms of gadolinium use in this contrast agent?

Kim Adams: Right. Well, thanks for having me. I think that it’s important to have a little bit of back story. The first gadolinium case involved people who had impaired kidney function. Those people that were getting this heavy metal contrast agent, which is gadolinium, as you’ve mentioned, were being diagnosed with an illness called, NSF. Today, fast forward, we’re finding that a lot of those same symptoms. NSF had symptoms like skin thickening, discoloration, a bone pain, and just a lot of other types of neurological injuries are symptoms that we’re seeing that didn’t necessarily see back then, we’re seeing now come forward in people with perfectly functioning kidneys, or near perfect functioning kidneys.

Farron Cousins: Gadolinium toxicity can cause the nephrogenic systemic fibrosis that you mentioned, NFS. That can actually end up impairing the kidneys according to the Mayo Clinic. So this gadolinium is a rare-earth metal. It is, actually, highly toxic in its normal form.

Farron Cousins: Just found in nature or synthesized in a lab, it has to go through a special kind of chelation just to make it less toxic. We’re using this in contrast agents for MRIs, because it is a metal, and because it reacts better with the magnets. It gives doctors a clearer picture, but at what cost?

Farron Cousins: This NFS stuff, or disease, I can’t call it stuff, but it does cause the hardening of the skin to where, it’s described as almost a wood-like texture and appearance on people. We’ve seen the pictures. It’s one of the few cases where I’ve had the opportunity to actually go through the documents and help out in some of the research with it.

Farron Cousins: It is truly horrifying for the people that develop this, isn’t it?

Kim Adams: It really is and what happens, you referenced the number of people exposed to it, right? So you figure about 30 to 50% of every person getting an MRI, or MRA, is asked to use this contrast agent to enhance the picture for the doctors, as you’ve mentioned. There’s two types of contrast agents. There’s linear and there’s macrocyclic. What we are focused on, what we feel the most dangerous, if you will, is the linear gadolinium. Gadolinium does not enter the body through any other way than this injectable form prior to an MRI. Unlike some lead poisoning, that you might eat or something like that, gadolinium does not enter your system that way.

We know that gadolinium is only through this MRI issue. And what we also know, now, is that these guys have probably known about this, the researchers and these manufacturers since the ’80s, that gadolinium is accumulating in your retinas, in your bones, in your tissues, in your ligaments, and in your brain. We can now see gadolinium accumulation in the brain. And where we’re trying to figure out is how do you make those symptoms? What symptoms are you associating with that type of accumulation in the body?

Farron Cousins: You know, we, as a country, here, in the United States, I think we’re second only to Japan in the number of MRI machines that we have in this country. We’re number one in the per capita people getting MRI scans. With so many people getting them, and the chart, I was looking at it this morning from the government. It is absolutely insane. It’s just this massive upswing. We’re looking at 11% roughly, right now. I think it’s 10.9.

Farron Cousins: That’s going to go up. We’re going to have more people getting these kinds of contrast agents. And, I think, one of the bigger problems here too, is that when you go in for the MRI, it’s because something else is wrong or bothering you. There’s another reason. That’s what’s on your mind. When the doctor or radiologist comes up and says, “Are you okay with us using this contrast agent?” People, they’re, “Okay. Yeah, yeah. I’ll do it. I’ll do it.” Because they’re, “What’s wrong with my lungs, or my heart, or my knee, or my hip?” They’re not worried so much about, “Yeah, okay. Just put this in me so we can get the pictures, so I can find out what this is.”

Farron Cousins: It’s tough for them, because now they have to worry about, well, what else is going to happen to me because of what you’re putting in?

Kim Adams: Two things, one, people don’t know that they need to be worried about it, right?

Kim Adams: Until the black box came out from a process from our litigation of this NSF issue and the impaired kidney function, prior to gadolinium. We feel as though people should have been warned and instructed and doctors should have been instructed, “Look, if you’re giving a person two, three, four, five MRIs,” some people have had 10 MRIs. You got to let them know that we now know about this accumulation. And we’ve known about it since the ’80s. 2007 is when the research started to accumulate and we started looking at pathology. Then, not until 2018, did the FDA finally come out and say, “Here’s our warning, there’s some accumulation.”

Now, the manufacturers have made some notice in 2017 that, “We think there may be some accumulation, but we don’t know if there’s a relationship to any type of particular illness.” But we know now, as in May of 2018, after all this time, that finally patients need to be educated on, “Hey, look. This is something that potentially can impact you. You don’t have to have contrast. You have a choice in contrast,” not to say, necessarily, until the science comes out, or until we really fully evaluate all this, but you have a choice.

That’s what all of us want, right? We want to know what our choices are. Give us the full facts. You referenced other countries. Other countries have either severely limited and significantly limited use of these contrast agents, and gadolinium, linear, for sure, or completely banned them all together, right? Instead, the US, we sort of, “Let’s wait and see. Let’s wait and see.” We’ve got to get that under control, but I think patients, what they do need to be aware of is that, you have a choice, ask questions, and understand that this is a serious issue.

Farron Cousins: Right. When it comes to anything with your health, you always have a choice. Do not just, “Okay. Well, you say I need this, so I need this.” No. In most cases, same thing with pharmaceuticals, there are alternatives. There are other drugs that do not have these side effects. There are other contrast agents that may not have these side effects. As you said, we don’t know for certain, but, absolutely, you have a choice, exercise that choice. Kim Adams, thank you very much for telling us this story today.

Kim Adams: Thanks for having me.

Farron Cousins: We’ll be right back with more Ring of Fire.