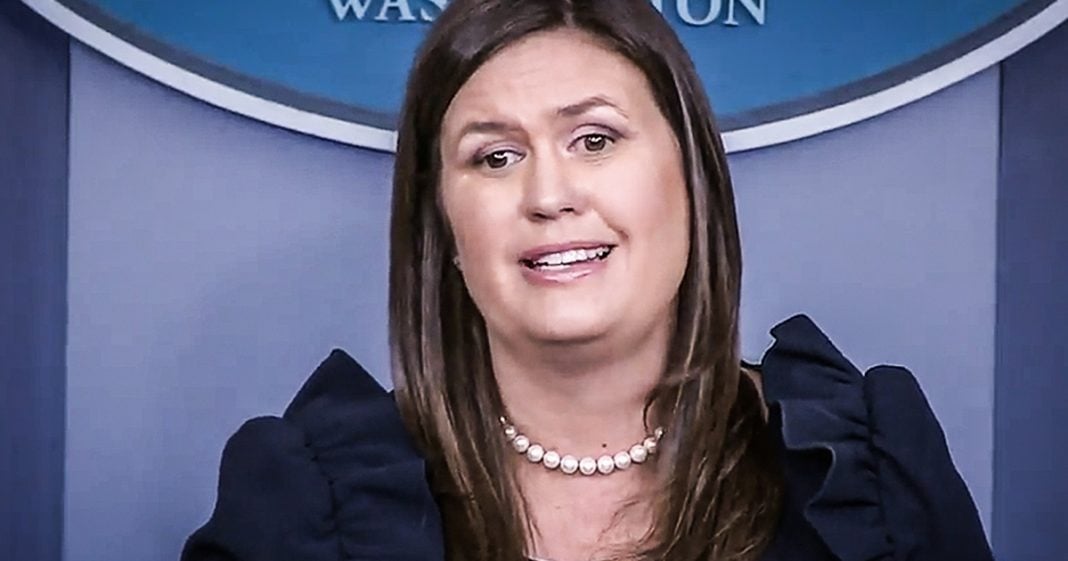 During Wednesday’s White House press briefing, Sarah Huckabee Sanders was asked why so many people associated with the President are going to jail right now, and the best she could come up with is that MOST of the people who’ve worked for Trump over the years aren’t in prison, so that’s a positive, right? Ring of Fire’s Farron Cousins discusses Sanders’ shifty language here and why it isn’t fooling anyone.

So Wednesday didn’t go very well for Sarah Huckabee-Sanders after Trump’s really, really bad Tuesday, but that was to be expected. Any time the president has a bad day, you can guarantee that Huckabee-Sanders is going to have a very bad day after that. Because she’s the one that has to go up to that podium and answer all of the questions about all of the horrible things the president has done, and Tuesday after the Manafort verdict, the Cohen plea and his implication of Trump in a felony offense … Yeah, it went exactly as we would expect.

But one reporter there, asking about those issues, but asking it in a better way, I think, that really caught Sarah Huckabee-Sanders off guard. And the question, boiled down, is why do so many people associated with the president end up going to prison? And this is was Sarah Huckabee-Sanders had to say. Here’s the interaction.

Hallie Jackson: Given that five convicted felons are now linked to the president, or his campaign, and given that the president promised to hire the best people, did he fail to live up to that promise?

Sarah H.S.: The president has employed thousands of people in his lifetime and had incredible successes both in business and in the public service. He’s the president of the United States. I think he’s doing quite well.

Hallie Jackson: My second question, Sarah. Just to follow up because I understand that you don’t want to answer the same question a million times, and you’ve said the president did nothing illegal, but I didn’t hear a response to the question. Did he lie to the American people when he talked about this on Air Force One?

Sarah H.S.: No, and the president’s addressed this a number of times.

So, yeah! Okay, the guy’s had lots of people that work for him. And most of them aren’t in jail right now, so why don’t we focus on them? Why don’t we talk about the people who aren’t out there committing felonies or implicating the president in criminal activity? Because that’s not what the issue is here. But, yeah, Sarah. Seriously. A lot of the higher up people who have surrounded the president are going to jail. That does seem like a problem. It’s something I’ve pointed out before, too. How is it that a man as allegedly innocent as Donald Trump still manages to surround himself with people who are committing felonies left and right?

Eight counts guilty for Manafort, would have been all 18 had the one MAGA holdout in the jury not continuously referred to it as a witch hunt. Don’t know if you’ve seen that story, but that’s out there today, so there’s a tainted juror for you. Cohen, eight counts. Papadopoulos, Flynn … Who else is out there? Rick Gates. Yeah, a lot of them. Pretty much everybody who’s every been strongly associated with the president is gonna end up in jail. I think that’s worth an answer. Instead, 41 times out of the last 100 times that Huckabee-Sanders has been asked about any of Trump’s legal questions, problems I should say, 41 times she has directed them to the president’s outside counsel.

And we all know who the outside counsel is, right? That’s Rudy Giuliani. So Huckabee-Sanders is actually telling reporters, which she did multiple times in Wednesday’s press briefing, “I have to refer you to the outside counsel.” You’re gonna have to talk to Rudy Giuliani about that, because he knows more about it than I do. He’s better equipped to discuss it. Trust me, Sarah, as horrible of a human being as you are, you are still likely more knowledgeable about the law than a guy like Rudy Giuliani. I don’t think anybody wants to spend any time having to ask him actual questions about how corrupt the president is unless, of course, they want Giuliani to admit that Donald Trump committed even more crimes, which seems to be the only thing that man is capable of saying when he goes out there and does interviews.

But, yeah. We need to focus on the fact that everybody around the president seems to be dropping like flies, and just because thousands of people have worked for his companies in the past and didn’t end up in jail … It doesn’t mean that the higher ups who are going to jail don’t matter.