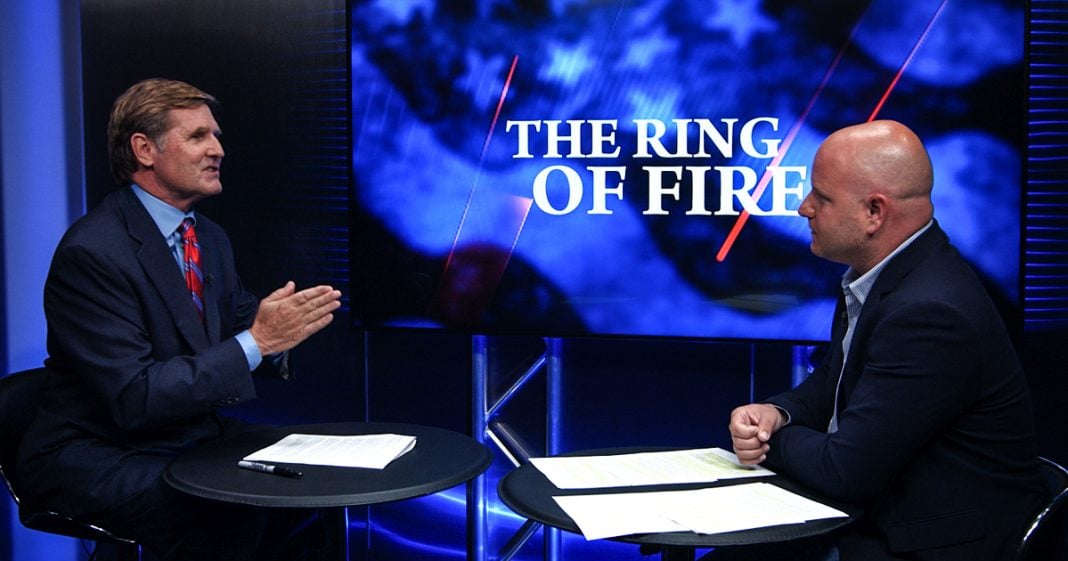 Last week a jury in California found that Monsanto had covered up the dangers of Roundup and awarded to plaintiff $289 million in damages after he developed cancer after just a few years of exposure to Roundup as a groundskeeper. Ring of Fire’s Mike Papantonio and Farron Cousins discuss this issue.

Mike Papantonio: … during California found that Monsanto had covered up the dangers of Roundup and awarded to plaintiff $289 million in damages after he developed cancer after just a few years of exposure to Roundup as a groundskeeper. As you know, this case is one I’ve been working on quite a long time. I’ve got 16 of these set to go to trial next year as a matter of fact that. These lawyers out in California today, great job presenting the case.

Here it is, the presentation is simple and it has to do with choice. Person uses your product, they should have a choice on whether they want to use a product that can cause cancer. And, if you’re not sure it’s going to cause cancer but there is information on both sides; it May, it may not, the user should be the person that makes the decision. That’s how the case was tried and that’s the way we’ve taken the depositions leading up to this case.

The depositions, I took three of them have people in the top management. That was the question. Shouldn’t a person have a choice? You know, we’re not 100% on anything. We’re not 100% sure, but you have all of this science that’s it will cause cancer and you don’t even disclose that to the user? It’s just a $289 million verdict. Bayer lost $11, I think it was $11 billion because of this hit, and it couldn’t happen to a better company.

Bayer is a bottom feeder, Monsanto, they’re bottom feeders. What a perfect match. You have these two bottom feeding companies that are going to have to fight their way through this. What’s your take on it?

Farron Cousins: Right now Bayer is freaking out because they’ve only owned Monsanto for two months and one of the first things that happened is this massive $289 million dollar verdict. They’ve already said they’re going to appeal, but what’s happening right now is you have shareholders. You have owners in Bayer that are absolutely freaking out in the boardroom because they saw their stocks dipped 14% in one day.

They’re trying to figure out, “Okay, well we have literally thousands of lawsuit still pending. Yes, we’re going to appeal this one. It’s probably going to get knocked down a bit, but we’ll see.” But at the end of the day, they really got hammered because they hid the dangers. There’s nothing they can do to overcome that part of it. They may reduce the damages, but they’re going to get popped a lot more than just this one.

The earliest, earliest information told Monsanto that this was going to happen. As a matter of fact, interesting … And it’s almost like, … Like I said, couldn’t happen to a better company, Monsanto and Bayer together. You talk about to bottom feeding, major corporations, I’ve sued more times than I can count. I don’t know how many times I’ve been at trial with Bayer.

On pharmaceuticals that kill people. Over the years it’s startling. Matter of fact, probably the one most people are familiar with is the Yaz case where Bayer made this product that was supposed to be birth control. It was killing women by the hundreds all over the country with DVTs and blood clots,

But anyway, the mentality of Bayer is, “We’re going to get away with it as long as we can.” I think it’s remarkable. Matter of fact, the lawyers that advised Bayer to do this, the lawyers that said, “Yeah, we don’t see a problem with the Monsanto case,” I think they’ve set themselves up for a big, big malpractice case because that had to happen. Somebody had to say, “Here’s the pros and the cons, Why don’t you go ahead and do this, we think it’s a good move.”

Next thing going to see, shareholder derivative suits where shareholders are suing Bayer for this executive decision. And you know what, they will win this because there was so much material that says … We’re just talking about cancer now. You understand, this causes neurological disease, causes birth defects, causes diseases that well exceed just cancer. Gastro issues that mimic Crohn’s disease.

We’re only seeing the beginning of this and it doesn’t go anywhere. This case doesn’t go away. The Supremes might take this one away, you don’t know. They may take this case away. The judge out there wasn’t the greatest trial judge at all. This is a trial judge, she was at every turn trying to help Monsanto win this case by not allowing the lawyers to introduce evidence that clearly should’ve been introduced in this trial.

She’s likely to knock it down Appellate Court, I don’t know. They might take it up. But at the end of the day, somebody’s going to pay, and Bayer has bought themselves this massive, massive liability. I guess maybe Monsanto’s smarter than Bayer. Hey, take all my liability.

Farron Cousins: You know, they got a lot of new shareholders. A lot of people bought into the stock when the sale was about to happen. They knew the price of it was going to go up and make a lot of money. Now, they’re getting hammered on this and I have no sympathy for them whatsoever. They knew what kind of company Bayer was, what kind of company Monsanto was.

But see here’s the thing, Monsanto tried to argue in court two things. One obviously that none of the science that says it causes cancers of any kind or any illnesses, that’s all bunk, you need to look at all of our industry-funded science. But the second thing, and this is what’s interesting in this particular case. They tried to argue that this groundskeeper who has terminal Non-Hodgkin’s lymphoma, the man will die from this. He was only exposed to Roundup for two years.

They tried to say, “No, no, no. This cancer can’t develop that quickly after exposure to this.” Listen, Monsanto or Roundup, excuse me, glyphosate, if you get it on your skin, within 30 minutes it is detectable in the blood stream.

Mike Papantonio: In your urine.

But, I think the jury saw that these are absolute … When I tell you, and I’m telling you. I’ve taken the depositions, I’ve been across the table. This is one of the biggest bottom feeding companies I’ve ever seen. Where it comes to them manipulating, phonying up clinicals, phonying up studies, paying off doctors and scientists all over the country to say what they wanted them to say. This is a corrupt company that really …

The only thing I’m amazed at is the Department of Justice hasn’t gotten more involved here and we know why they didn’t right? They didn’t because Hillary Clinton was the woman who was helping push glyphosate all over the world. She was helping push GMO all over the world. You realize even Obama was pushing GMO. Now, why is that important? Because GMO, they invented GMO because it was one of the few things that could withstand the poison of Roundup and if they can have a seed that would do that, then they could sell Roundup all over the globe.