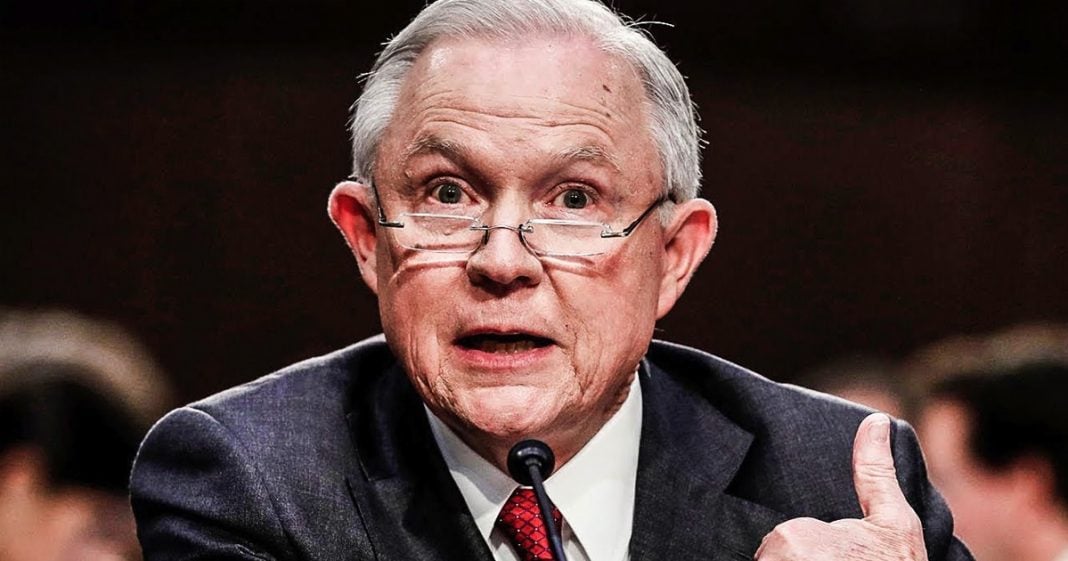 According to a new report, the DOJ rescinded a rule once Trump took over that once again allowed abusive private prisons to handle work on behalf of the federal government – something that the Obama administration had ended just a few years prior after reports of rampant abuse at detention facilities run by private companies. But Jeff Sessions wants private prisons running the show, and they’ve made a killing off the imprisonment of migrant families. Ring of Fire’s Farron Cousins discusses this.

Nobody has benefited more from most of the policies of the Trump administration than a group called the GEO Group. Now the GEO Group is a company that owns multiple private detention facilities throughout the United States, and they also have very lucrative government contracts to lock up migrant families. They were one of the main contractors who was locking up children, locking up their parents in separate facilities. But back in 2016 the Obama administration … one of their last acts, really, before the 2016 election … they decided to stop using the GEO Group, and really any private prison contractor for any federal purposes, which includes the housing of immigrants. They did this because they realized that the abuse and the disgusting treatment that people were receiving at the hands of these private prisons was so much worse than what you would get at a normal federally funded, federally regulated prison. So, the DOJ under Obama issued an order saying, “We’re not using these for any kind of federal contracting anymore.”

Well, one of the first things that the Trump administration’s DOJ under Jeff Sessions did as soon as they took power was they rescinded that order. They said to hell with it. We have all these reports showing how much abuse happens in these detention facilities, but they gave Donald Trump a lot of money in the campaign. The GEO Group paid a lot of money for Donald Trump’s inauguration party, so we’re gonna give them everything that we possibly can. And that’s what’s happening today. We still have hundreds, I believe at this point, of children, migrant children who have been separated from their families. A lot of the kids their parents have actually already been deported, so there’s really no way to reunited them, at all, ever, because they screwed that up so badly.

But here is some of the other things that are taking place at detention facilities being run by the GEO Group under federal government contract. This was first reported by ThinkProgress. The link to this report is in the description of this video. But I wanna read this, just some of the abuses they’ve discovered here, and this is both before and after the Obama order. So some of it 2016, some of it present-day.

“Provided inadequate care for more than 1,000 women and children living there.”

This is at a GEO Group facility in Karnes City, Texas.

“An inspection found children left unattended, an employee unqualified for the job, children’s allergies or chronic medical conditions not properly documented, cleaning carts and supplies left unattended, parents and children not read a list of rights when they arrive.”

Those seem pretty innocuous enough, but it gets so much worse.

“Other accusations claim detainees at the facility have been abused by guards and staff. One lawsuit alleges staff and guards removed female detainees from their cells overnight so they could sexually abuse the women, promise them money or assistance in their case pending immigration cases in exchange for sexual favors. Kissed, fondled and groped them in front of other detainees, including children.”

“Back in 2016 ICE inspectors recommended docking The GEO Group hundreds of thousands of dollars in payments for violations at this particular facility, which is one of the ones still being run today. Violations include non-functioning security cameras, not providing interpreters for all detainees, a number of safety concerns surrounding the company’s nearby construction, running out of baby formula, not ensuring that its food service program for children and their mothers was sanitary.”

And again, a lot of that actually happened in 2016. So this was before the family separation became the policy of an administration. This was during the Obama years that this abuse was going on. The DOJ found it, ICE even wanted to do something about it because it was so bad. So the Obama DOJ said, “We’re not gonna use these private run facilities anymore, because of all of this.”

But knowing all of it, seeing all of this, seeing all the reports, Jeff Sessions came in and said, “You know what? We’re gonna do it again. And we’re gonna make it so much worse for the families who have to be sent to these detention facilities.” And again, this is just the immigration facilities. GEO Group runs prisons all over this country. And according to the reports, pretty much just as bad as what we’re seeing with these migrant families. And according to Jeff Sessions and the Donald Trump Department of Justice, all of this abuse is perfectly okay because companies like the GEO Group give a hell of a lot of money to Republicans.