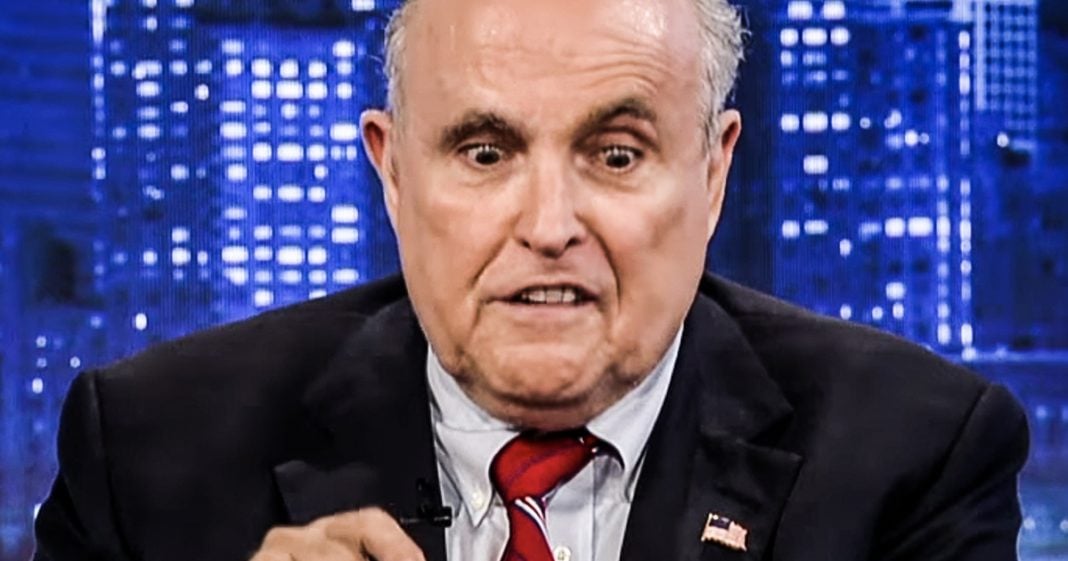 Donald Trump is furious with Rudy Giuliani, but not for the reasons that he should be. According to sources at Vanity Fair, Trump is mad that Giuliani didn’t want to take the job as Attorney General, and because he declined the job, his son is now in serious legal jeopardy. Trump obviously hasn’t been watching Rudy’s TV appearances, because those are far more damning than Giuliani simply turning down the AG job. Ring of Fire’s Farron Cousins discusses this.

Donald Trump is allegedly furious at Rudy Giuliani. Recently, according to Vanity Fair’s Gabriel Sherman who has multiple sources inside the White House, he’s been on top of that since Day 1 with these really good sources that have all, pretty much, turned out to be 100% accurate, but he says that his sources tell him that Rudy Giuliani has been on the receiving end of a recent Donald Trump scream session where Trump was screaming at Giuliani for putting his son in legal jeopardy. Now, when I first saw this headline, I thought what probably a lot of other people thought too. “Oh, he’s mad about Giuliani going out there this past Sunday on TV and saying that Trump Jr.’s meeting was all about getting dirt on Hilary, which is basically an admission of conspiracy to collude.

That’s actually not what it is. That’s not what Donald Trump is furious about. Instead, he is mad at Rudy Giuliani for not taking the job as attorney general and instead, Trump had to appoint Jeff Sessions who then recused himself from the Russian investigation, which according to Trump is what has allowed this to go all crazy and haywire and put his son in legal jeopardy. He’s mad that Giuliani didn’t take the job and he believes that if Giuliani had, he could’ve directed all this and just basically made it all go away, which just further leads us to believe that Donald Trump is guilty as hell.

This investigation, these people are not in legal jeopardy because of who is investigating them. They’re in legal jeopardy like Don Jr. because it really looks like they broke the law and all the evidence, right now, suggest that they did. It doesn’t matter who is in the White House. Yeah, Giuliani as attorney general could have buried this if he chose to, but since it wasn’t buried, we know the truth. I know Giuliani likes to say that the truth isn’t the truth. The truth is the truth. The truth is, it looks like every member of the Trump family is guilty as hell.

Donald Trump can scream at Giuliani all he wants for not taking that AG job. What he should be screaming at him for are his horrendous media appearances. That warrants a good tongue-lashing for that. Again, Giuliani went on TV this past Sunday and implicated Donald Trump Jr., Jared Kushner, and Paul Manafort in felony offenses against the United States. You can’t tell me that that doesn’t warrant a good screaming session from Donald Trump himself when you basically sent his son, his son-in-law and this guy that he really seem to like up the river, but not necessarily Giuliani’s fault there. Giuliani had a rare senior moment where he gave us the truth. That’s what’s so terrifying to Donald Trump. He has finally found himself in a situation with Jr., with Kushner, with Manafort, with Michael Cohen now, where he can’t lie himself out of it. He hired the worst possible attorney in the world for free, luckily, for him. Otherwise, he’d be getting ripped off tremendously in Rudy Giuliani.

Giuliani has ruined things for Trump to the point where there is no legal defense that Trump could mount to keep himself and his family out of trouble at this point given what everybody else has already arranged for in their plea deals, the things they have already told them. The clock is ticking on the Trump administration at this point. I think even Donald Trump himself is aware of the fact that he can be mad at Giuliani but he knows at the end of the day, he needs to be mad at himself for ever deciding to run for president. Because after all, had he not done that, he could’ve lived out the rest of his life happy and carefree with nobody ever bothering to look at the horrible things that his family has been doing for decades.