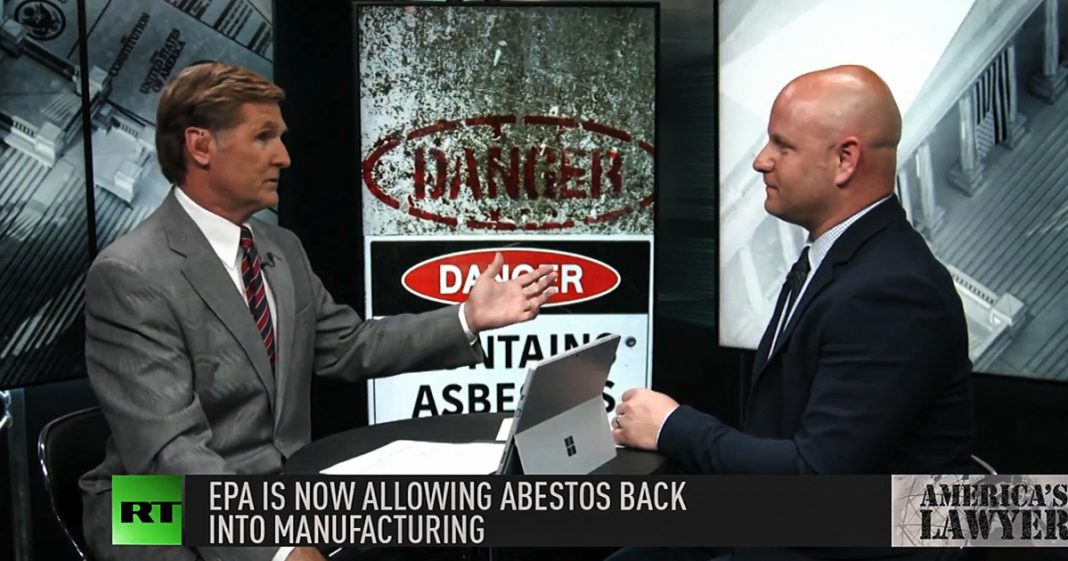 Via America’s Lawyer: Mike Papantonio and Trial Magazine Executive Editor Farron Cousins discuss a new rule from EPA that will allow Asbestos to make a comeback in the U.S.

Mike Papantonio: The Environmental Protection Agency’s been run by industry. There’s no simpler way to put it. After a year and a half of working to repeal protections for American citizens, they’re now going after a protection that if repealed, is going to allow asbestos to enter our lives in a big way again.

Joining me to explain and discuss some of the other major stories of the week is Farron Cousins. He’s executive editor of the Trial Lawyer Magazine, and we’ve got stories to talk about this week. How do you explain it? EPA comes up and says, “Yeah, we know that asbestos has been killing people for decades.” Thousands, as you know, I handled the very first asbestos cases tried in this country. Mesothelioma cases, cancer cases, every scientist in the country, everywhere in the world is a legitimate sign that says, “Yes, asbestos will kill you.” What’s your take on the EPA here?

Farron Cousins: This was Scott Pruitt’s, it was his real swan song. Right before he resigned, he came up with this new rule with the EPA. They’re calling it the significant new use rule so that they can look at these old chemicals and substances that basically had been regulated to the point of almost keeping them out of our lives, because they kill us, but asbestos is one of the first 10 that’s gonna be reevaluated. At the same time of this reevaluation, they also redid the reevaluation process, which means they no longer are even allowed to look at whether or not something that goes into the air or the water or the soil, if that affects you, which means asbestos, which has to be breathed in to cause the problems, that’s no longer taken into consideration when they evaluate whether or not to start using it more frequently here in the US.

Mike Papantonio: Interesting take on this story. This is banned almost everywhere on the globe. It’s banned everywhere. The place we’re gonna be getting it is from Russia, because they’re happy to ship it to us. As a matter of fact, I saw in a story where, you know, almost sick humor, they’re shipping it to the United States and putting a stamp of Donald Trump’s face on the asbestos- true story. They’re putting a stamp of his face as it comes into the country.

Now, here’s the point. Here’s what the EPA knows: they know that mesothelioma is a cancer that kills long period, it’s a big latency. Could sometimes just 20, 30 years, they understand that what it does, the cancer grows in such a way, the person doesn’t really know it until it starts crushing their lungs. The asbestos causes a scar-based cancer. It actually starts crushing the lungs. Once the mesothelioma cancer takes over, there is no cure. I mean, new lungs is the only thing that’s gonna save you. They understand that a person dying of asbestos-related cancer, it’s a particularly slow, horrible death.

EPA knows this. The people that are allowing this to happen, there is tons of material, and here’s what else they know: they know that the industry, when they started putting this out in 1930s, is really when we first started seeing it, there’s some documents that are called the Sumner Simpson documents. The corporate executives in those documents say, “These men are going to make a good living with asbestos. They can die with asbestos.” Trump is saying, “Yeah, this is a good idea. Let’s bring it back into the country.”

Farron Cousins: This EPA that is now 100% an arm of industry says, “You know what? Let’s bring it back into the United States, one of the only countries where it’s not outright banned, and let people get exposed.” 40000 a year are dying from this already, as it is right now.

Mike Papantonio: Yeah, so this was kind of Pruitt’s last gift. Not only we’re gonna do away with clean air, we’re now gonna poison people again. We’re gonna cause horrible disease with asbestos.