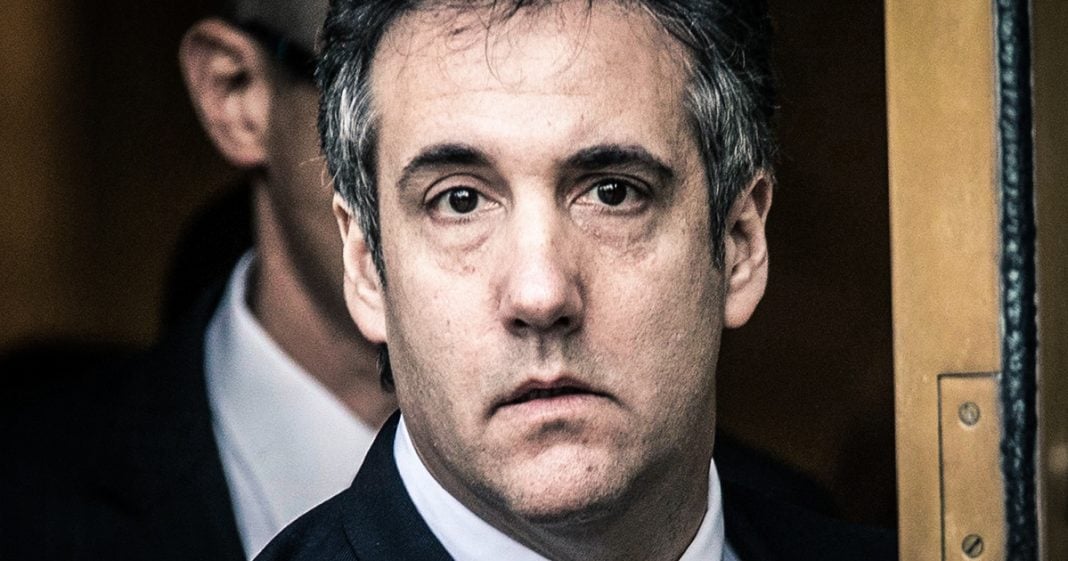 The day most of us have been waiting for finally arrived, with former Trump lawyer/fixer Michael Cohen reaching a plea deal in exchange for a lighter sentence. Cohen admitted under oath that he violated federal campaign finance laws at Trump’s request, directly implicating the President in criminal activity (a felony.) Ring of Fire’s Farron Cousins explains what this new information could mean for Trump.

Well the day that most of us have been waiting for for quite some time finally arrived yesterday, with Michael Cohen working out a plea deal with prosecutors and investigators in exchange for a lighter prison sentence after he pled guilty to eight different counts. And while pleading guilty to those eight counts which included: bank fraud, tax fraud and campaign finance law violations. He also implicated President Donald trump in felony activity. Here’s what happened. According to the testimony that Cohen gave in court under oath, under penalty of perjury, he said that he made the campaign finance law violations at the insistence of the candidate. Now he did not list Donald Trump by name; Donald Trump is not listed by name in any of the court filings but the payments in the campaign finance law violations that they’re referring to are the $130,000 payment to Stormy Daniels and the $150,000 payment to Karen McDougal, the former Playboy model. And in the filings though again, not mentioning Trump by name, it mentions that the candidate who these payments were made at the discretion of, started a presidential campaign on or about June 16th 2015 which is exactly the date that Donald Trump launched his presidential campaign.

And it also, the dates of these violations also coincided with the dates that the payments to Stormy Daniels and to Karen McDougal were made. So yeah, it’s pretty obvious that this is 100% Donald Trump. Lanny Davis, Michael Cohen’s attorney did confirm that later on in the day that yeah, he’s talking about Donald Trump committing a felony in terms of campaign finance law violations. Technically two felonies cause each one, the Daniels and the McDougal payments are each a different count. That’s not the only thing that happened yesterday. Obviously there was Manafort being found guilty on eight counts; we also had a Republican representative indicted yesterday. So it was a big day, a bad day for Donald Trump overall. He was weirdly silent on Twitter up until about this morning when he said that, hey if anybody is looking for good legal representation, I recommend you don’t hire Michael Cohen. It was an attempt to joke but then later on, in tweets he started saying Michael Cohen’s making stuff up. Here’s the problem though, Trump could be right about that. I don’t think he is whatever. But Cohen’s gonna have more evidence that Donald Trump directed him to make these payments than just going and saying under oath that yes he told me to make these payments.

I mean, yeah you could be slapped with perjury if you’re lying about it. But when you’re already pleading guilty to eight different counts, what’s a little perjury on the side. So Cohen has to be able to back these up with evidence but obviously prosecutors would not make a deal with him if he wasn’t able to produce. We do know that Michael Cohen has tapes, we do know that the tape has been released, where it appears that the president is talking about the payoff to Stormy Daniels. If that evidence along with Cohen’s testimony happened to prove to be true, there is nothing trump can do at this point to avoid any kind of felony charges really. And here’s the thing. You got Fox News trying to defend him, you got Alan Dershowitz who went on TV last night and said, oh well everybody does these campaign finance laws violation when they run for office. No they don’t. I mean, their defense of him now is, well everybody breaks the law. I mean, aren’t we all just criminals anyway. So we should just let this go. That’s how the people in Fox News are actually defending this.

And then you had Fox News also say, according to their source in the White House remember, the president can’t be indicted. That’s literally nowhere in US law. Nowhere in any legal statute regarding anything in this entire country, does it say that the president can’t be indicted. That is absolutely insane. In fact, indictments were being written up against Richard Nixon, when he resigned. So yeah, a president can be indicted, unless he resigns first and then gets a pardon from his vice president, turned president. Which is what happened in the case of Richard Nixon. Fox News, the Republicans, the MAGA hat wearing crowd, they don’t know how to react to this. They’re grasping at straws and they are failing miserably. But the biggest thing we need to focus on right now, is that Michael Cohen, Trump’s long time lawyer/fixer has just implicated the President of the United States in two felony activities. And if Cohen is telling the truth and he has the evidence to back it up, maybe finally this could be the beginning of the end of the Trump administration.