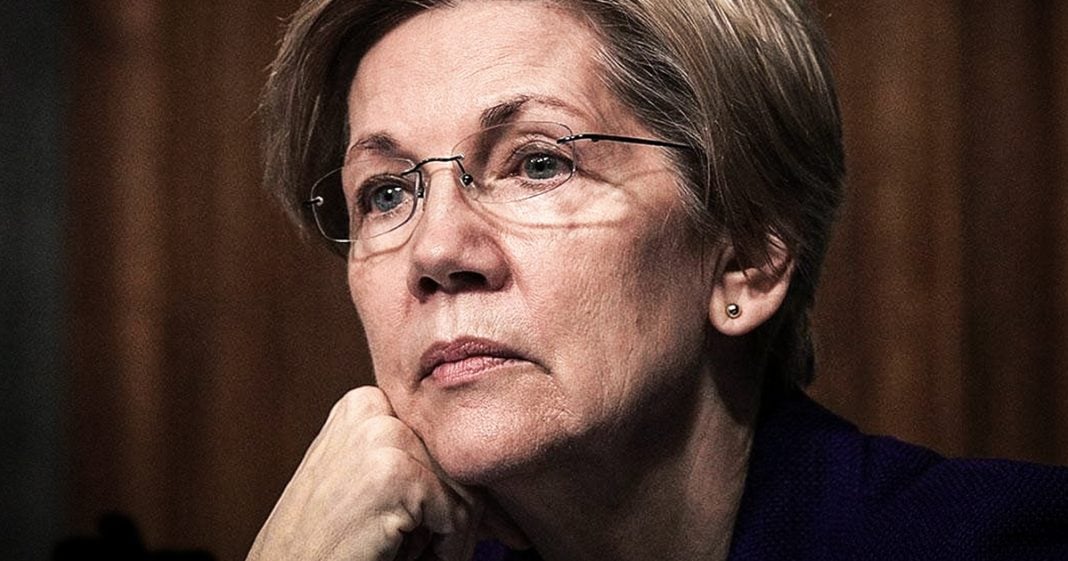 Senator Elizabeth Warren is proving that she is serious about rooting out corruption in DC with the introduction of her new Anti-Corruption and Public Integrity Act. This legislation is designed to permanently close the revolving door between Congress and lobbyists and reduce the amount of power that corporate special interests wield in DC. Ring of Fire’s Farron Cousins discusses this.

Yesterday during a speech at the National Press Club, Democratic Senator Elizabeth Warren unveiled her Anti-Corruption and Public Integrity Act. The goal of this bill that Elizabeth Warren has written is to basically close the revolving door, shut it down forever, between members of Congress and lobbyists in Washington, D.C. It would institute a lifetime ban on anyone who has served in Congress to ever become a lobbyist in any way, shape, or form after leaving office, and that’s just a small part of what this legislation would actually do. What it’s trying to do overall, without getting into too many of the specific minute details of it, it’s trying to get rid of the corrupting influence that corporate money has on our politics in a different way than say, getting rid of Citizens United, which is still something obviously many members of Congress want to happen. Most American citizens, Republican and Democrat alike, want that to happen, but that’s an issue that’s going to be a little bit tougher.

Elizabeth Warren, right now, is working on the other route, and that is the lobbyists. Right now, lobbyists are spending hundreds of millions, if not more than that, every single year to influence members of Congress, without having to donate directly to their campaigns. We have half a billion dollars, a little more than half a billion dollars, that has come from lobbyists, or paid for lobbyists, from foreign governments to influence our policies here in the United States just in the last 12 months, half a billion of foreigners, foreign governments, influencing our government to benefit them that has nothing to do with any of us here. Elizabeth Warren would shut that part down 100%. No more foreign governments or foreign officials coming and lobbying our federal government, and that is absolutely what we need.

Here are a few of the specifics. I do want to mention this stuff, and this is as ThinkProgress lays it out. It would end the corporate capture of rulemakers and regulators, tighten ethics restrictions on federal judges and elected officials so as to prevent bribes and gifts from influencing their decisions in the practice of stock trading among members of Congress beyond conflict-free investments like mutual funds, definitely something that needs to happen, especially in the wake of Chris Collins being indicted for insider trading, create new transparency regime that would bring the financial and tax histories of elected officials into the light, as well as closing loopholes to open records laws that currently allow influence peddlers to obscure their dealings.

ThinkProgress, there’s a link in the description of this video, has a great kind of layout of everything that this piece of legislation would do, but the bottom line is this. Elizabeth Warren is out there. She’s fighting back against corruption. She is fighting back against corporate power, and there are not enough people out there like her right now doing this. We have a lot of people talking a big game, but so far when it comes to putting pen to paper and writing legislation, we’ve got Elizabeth Warren, we’ve got a Bernie Sanders, but what else?

Seriously, what else? There’s not too many other people out there who are directly writing legislation, writing these bills, trying to bring them to the floor, to put an end to some of this stuff. There’s been plenty of cosigners and things like that, but not enough people willing to take the initiative and take on these massive industries, the well-funded lobbyists, the massive corporations. We need more people like this out there, and regardless of what you think about her policies or politics. I know a lot of people are still mad that Elizabeth Warren endorsed Hillary over Bernie in 2016. Get over it, because she is a very fierce fighter. She is a voice for the underclass, and that is a voice that is certainly not loud enough in Washington, D.C. today, and it would be a grave mistake to dismiss her over one endorsement that she gave two years ago. We need her out there fighting for us, because if we didn’t have her, there would really be only one or two other people left in D.C. fighting for our voices.