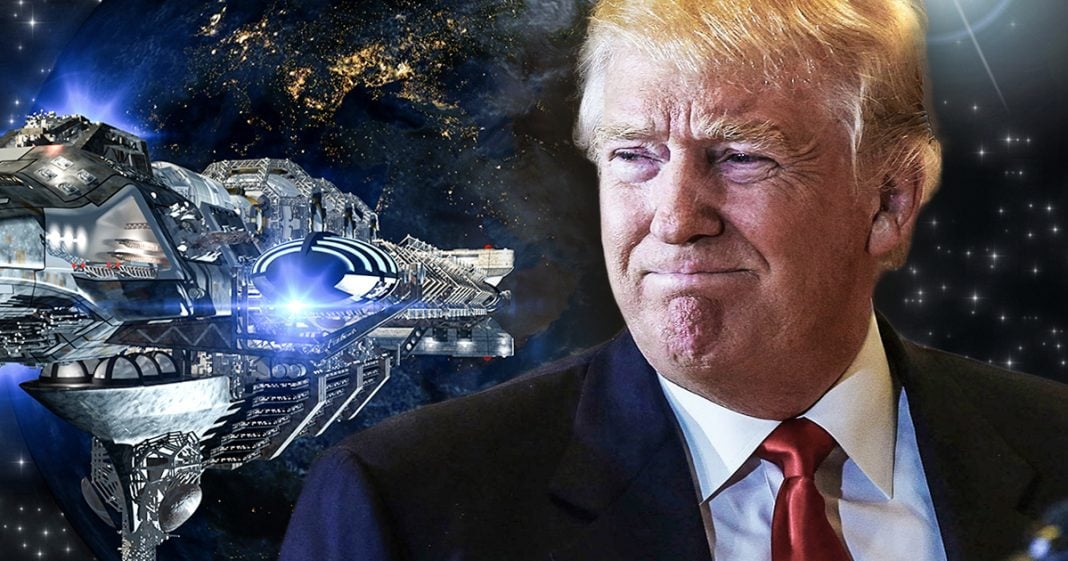 In what shouldn’t come as a surprise to anyone, aerospace and defense contractors have been revealed as the parties behind the push to build a Space Force, something that Donald Trump seems overly willing to do. In a new report by the LA Times, they lay out the sneaky ways that the Space Force push came about, and how contractors are basically salivating over the massive contracts they are about to receive. Ring of Fire’s Farron Cousins discusses this.

The story of Donald Trump’s Space Force has always been weird. Since the very beginning. But it’s actually even weirder than most of us have ever even realized, because as it turns out, the entire Space Force wasn’t actually Donald Trump’s idea. You see, republican members of Congress had actually been pushing for a Space Force starting back in 2016 and they did it at the behest of aerospace and defense contractors.

They wanted a new branch of military because they figured that that would be a great cash cow for them. So the story actually starts long before we even had the 2016 presidential election. And it all started with a Congressman from Alabama, Mike Rogers. See Rogers happens to be the Chairman of the House Armed Services subcommittee on Strategic Forces and this guy’s been wanting a military in outer space for quite some time now because his number one campaign donor is the defense industry.

$395,000 to his campaign in just the last 18 months. So they reached out to Rogers, kinda got him on board with this idea. Rogers, at this time Donald Trump was President, tried repeatedly to get Donald Trump in on this deal, and in fact, he even called him while Trump was down there in Mar-a-Lago trying to get him to support a Space Force.

But here’s the thing. Any new branch of military has to be approved by Congress. The President can not just unilaterally create a Space Force. What he could do, possibly, is create a new branch within an existing branch of government. You know, kind of like a little sub-division there, which is what they originally wanted to do. They were going to make the Space Force part of the Air Force. However, Rogers, after speaking to his good buddies in the aerospace and defense industries, learned that contractors don’t actually like dealing with the Air Force. They’re a little too bureaucratic. There’s too much red tape to go through. Too many hoops they have to jump through to get those contracts, so they didn’t want the Space Force to be a part of the Air Force. They wanted it to be its own division that they could easily manipulate, ’cause they’re having a hard time pulling one over on the Air Force, apparently.

So that’s the story of how this Space Force came about. It wasn’t Donald Trump’s crazy idea. This was an idea that was cooked up by the defense contractors, which honestly should not come as a surprise to anyone. It’s something that we’ve been predicting since the word Space Force were ever uttered in this country. And now, according to this new big LA Times report that lays all this out for you, we have the confirmation of it.

Mike Rogers, Congressman from the state of Alabama, has been in the pocket of the defense industry for years. And now they see the opportunity to make billions of dollars, possibly even more than that, off of the creation of this so-called Space Force. They’re calling in their favors. Rogers owes them quite a bit. Again, $395,000 to him in the last 18 months, and they’re coming to collect. They’re making sure that he is doing everything he can to convince his fellow members of Congress that the Space Force is an absolute necessity here in the United States.

It’s not because they care about security. It’s not because they’re worried about other countries knocking out our satellites. It’s because they are absolutely salivating over the thought of those billions upon billions of dollars in federal contracts, so that they can make a ton of money by giving us things that we really, really don’t need.