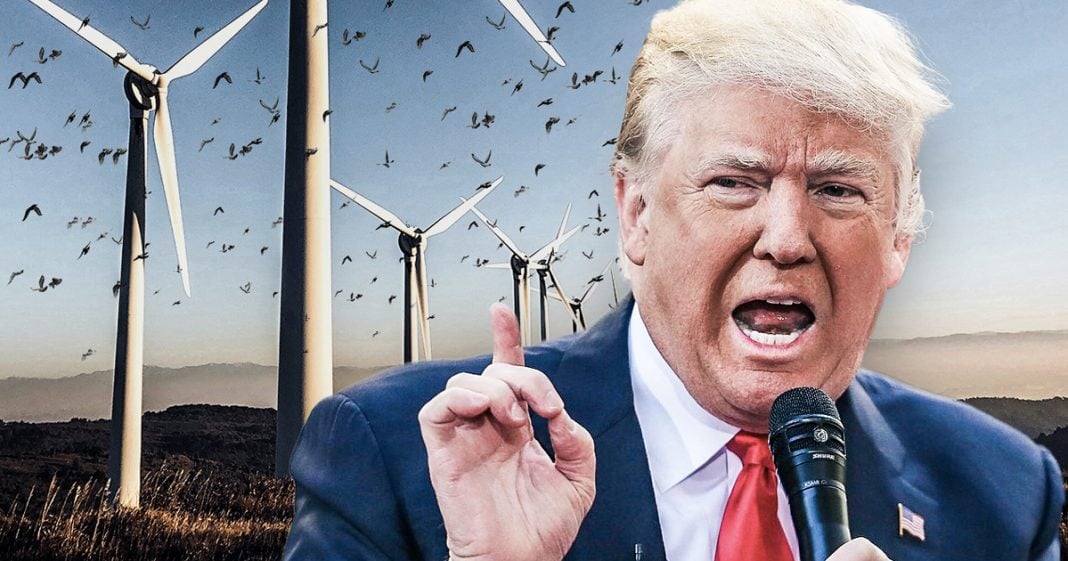 At a fundraiser in New York last week, Donald Trump repeated his ongoing attack on windmills in the US by saying that they are killing all of the birds. In the same breath, he talked about how great and wonderful coal is here in the United States. Obviously Trump is pandering to the fossil fuel industry, but his bizarre attack on windmills left even the staunchest conservatives scratching their heads. Ring of Fire’s Farron Cousins discusses this.

If someone were to ask you what is the thing that Donald Trump hates most in the world, you would probably say the media, you might say Robert Mueller, but the truth is based on statements this man has been making for years, it seems that the thing he hates most on the entire planet are windmills. During a fundraiser last week in New York, he once again went on his little tangent where he started talking about how horrible windmills are because they’re killing all the birds. Now this was part of his section of the speech I guess where he was talking about how great coal is, but I’m going to read you exactly what Trump said at this fundraiser.

Please understand that this is the way he said it and there’s a part I have to mime a few things out, so bear with me on that because that’s what he did during the speech. “You can blow up a pipeline. You can blow up windmills. You know, the windmills, boom, boom, boom, bing. That’s the end of that one if the birds don’t kill it first. The birds could kill it first. They kill so many birds. You look underneath some of those windmills, it’s like a killing field. The birds, but you know that’s what they were going to. They were going to windmills.” Okay. Aside from that reading like a really poorly written children’s book, yeah, birds occasionally run into a windmill. Yeah?

The force of that would likely kill them as with the drop itself, but see, I think Donald Trump doesn’t quite understand how windmills work. They’re not massive rapidly rotating fans up there in the sky like giant blenders waiting for birds to fly in and get pulverized. If you’ve ever seen a clip of actual windmills, they move very slowly. Birds move very quickly. Birds have eyeballs that can see these things. They don’t just run into them and plop to the ground as Donald Trump is saying. I mean this is absolutely one of the more idiotic things that has come out of this man’s mouth since becoming President of the United States and that is saying a lot.

Here’s the reason he’s on this attack because he ended his whole little weird paragraph I just read for you there with, “So, uh, the coal is doing great.” That was the last sentence he said, “So, uh, the coal is doing great,” after going after windmills for allegedly killing all the birds. His schilling for the coal industry is what’s happening here. He’s doing it in a very roundabout way that left even the staunches Conservatives in that room kind of scratching their head because they know that’s not true. Furthermore, since when the hell did Republicans care about any animal in this country?

I mean his administration has already lifted the ban on imported trophies from hunting big game over in Africa like his sons love to do. They’re repealing environmental protections trying to skirt the law and get judges to overturn laws that protect endangered species so that they can hand those lands over to the coal miners or the oil drillers or the loggers. So yeah. Are we actually supposed to believe that you care about birds? Not going to happen. But again all of this is coming from the coal industry, which by the way, they’re losing jobs left and right even in states like West Virginia. The coal industry is dying.

The only thing preventing it from finally passing away, moving on to that great beyond so that we can start utilizing renewable sources of energy here in the United States is the Republican Party. They are keeping it on life support knowing that it’s never going to wake up, knowing that it’s never going to be revived. They could pull the plug immediately and stop feeding them our tax dollars to keep them going, but they refuse to do that. Because as long as there is a single piece of coal or a single drop of oil left in U.S. soil, you better believe that these Republicans are going to do whatever they can to get that last little nugget of coal or that last little drop of oil out of the ground so that they can make a quick buck off of it.

That’s what Donald Trump’s little tangent about the dangerous windmills is all about. It’s not because he cares about the birds, it’s because he wants that fossil fuel money for himself and for the Republican Party. You can’t really have that money if we were a country that actually switched to renewable energy.