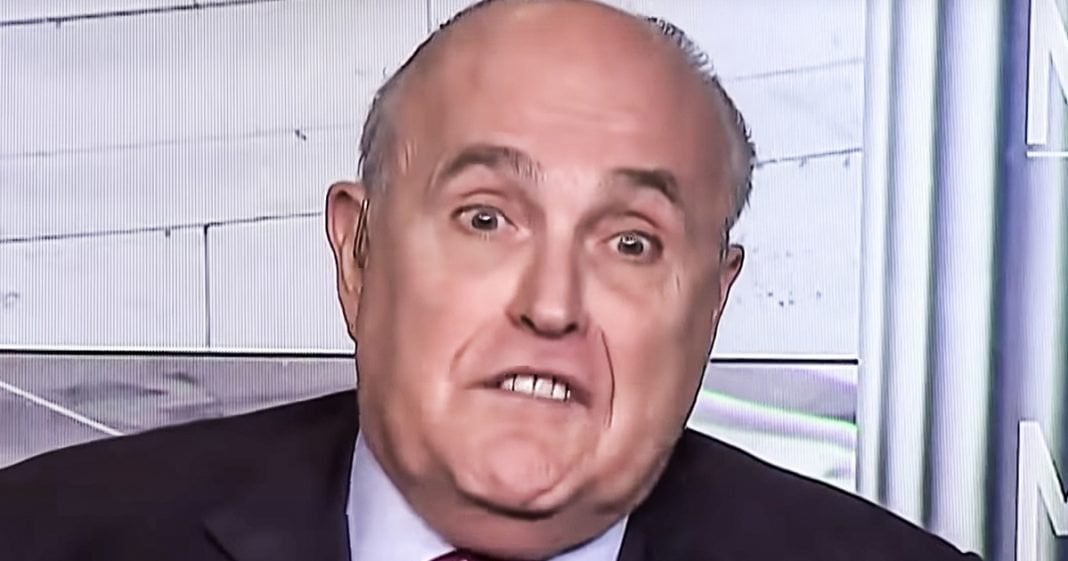 Rudy Giuliani just can’t seem to do his client, Donald Trump, any favors. On Sunday, Giuliani appeared on NBC’s Meet The Press where he proclaimed that “truth isn’t truth” with regards to Trump testifying to Robert Mueller. He tried to clarify his statement on Twitter, but the real problem he had during the interview wasn’t even in the part of the clip that everyone’s talking about, as Ring of Fire’s Farron Cousins explains.

Well, it’s Monday, and that means that even if you hadn’t looked at the news for the last 24 hours, you could go ahead and pretty much guess that Rudy Giuliani had said something really stupid on the Sunday morning talk shows, which in fact he did. He said two really, really stupid things actually, and let’s go ahead and start with the most obvious, the one that everybody is talking about. The truth isn’t truth claim that Giuliani made. Here’s the clip of that.

Chuck Todd: You believe this is on them, that you guys have not delayed the interviewing, delayed the negotiations at all?

Rudy Giuliani: No … each time by three or four days, so we could write a letter in response. They have taken two to three weeks to get back to us. So, what I have to tell us is look, I’m not going to be rushed into having to testify, so that he gets trapped into perjury. And when you tell me that he should testify because he’s going to tell the truth and he shouldn’t worry, well that’s silly, because it’s somebody’s version of the truth, not the truth.

He didn’t have a conversation about …

Chuck Todd: Truth is truth, I don’t mean to go …

Chuck Todd: Truth isn’t truth. Mr. Mayor, do you realize what … This is going to become a bad meme.

Rudy Giuliani: Don’t do this to me.

All right, so Giuliani did attempt to back track a little later on, on Twitter, saying, “What I really meant was it’s the he said, she said type thing. Like this is one person’s truth, this is the other person’s truth. That’s what I was trying to get across there.”

Giuliani still, in his explanation, and further on in that actual interview, doesn’t seem to understand that no, the truth does not change from person to person. The truth is the truth, and then you have a bunch of people who are lying about what actually happened, and that’s what he’s worried about with his client. He basically stated as much in that statement.

Trump’s going to say one thing, the other guy said this, and the truth isn’t always the truth. No, you’re worried that your client is going to go sit down with Robert Mueller, perjure himself, which you freely admitted in that interview, and then get popped for that, because your client can’t tell the truth. But as you claim, truth isn’t truth, that’s your defense at this point.

But see, while most people were focused on that part, because it is wildly stupid and corrupt and reminds you of George Orwell, by focusing only on that, you missed the part where Giuliani 100% admitted that Kushner, Don Junior and Paul Manafort committed a crime. Here is exactly, I’m going to read you this quote of what Giuliani said, this was during that same meet the press interview with Chuck Todd. Here it is.

“The meeting was originally for the purpose of getting information about Clinton. That was the original intention of the meeting. It turned out to be a meeting about another subject, and it was not pursued at all. And of course any meeting with regards to getting information on your opponent is something any candidate staff would take.”

He just admitted these dudes colluded, or at least attempted to. And he used a word in that sentence that absolutely can secure a conviction against any one of those three. And that word is intention. Because when you’re looking at something, legally speaking, to determine whether or not a crime was committed, or whether or not a crime was going to be committed, they look for intent. That simply little word, intent. He just admitted that it was their intention to get dirt on Hilary Clinton from these people who, according to the emails that Don Junior released himself, admitted that this was part of the Russian government’s effort to aid the Trump campaign.

This guy just sent Don Junior, Jared Kushner, and Paul Manafort up the river with this one statement. And yet everybody was so focused on the truth isn’t truth part of it that they missed this massive bombshell. This kind of seals the deal on it, I mean even an unskilled prosecutor would be able to secure a conviction with the opposition’s attorney out there saying, “Yeah, it was their intent to go do this, but they didn’t end up … they weren’t able to end up doing it after all.”

If your intent is to go and rob a store, or to murder someone, but you end up not doing it once you get there, you’ve still committed a felony in both instances, and you will still go to jail. It’s the attempted collusion, attempted robbery, attempted murder. Yeah, as long as it was your intent, as you say it is, Giuliani, they’re still going down.

So, good job, please by all means continue doing these disastrous interviews, because every time you open your mouth, you give us a little more insight into how corrupt this entire family and administration truly is.