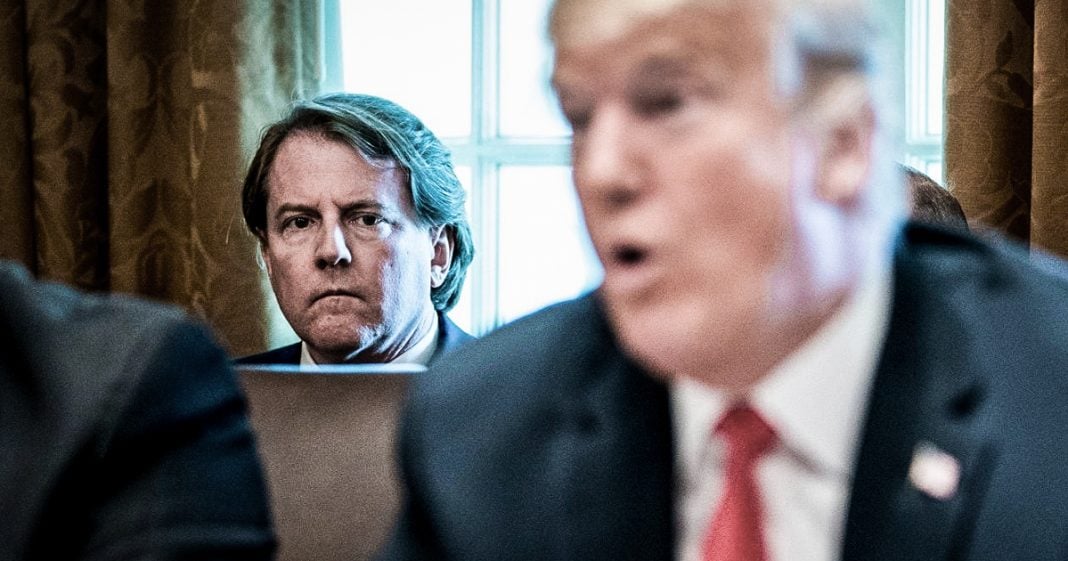 Donald Trump has engaged in a days-long Twitter tirade over the fact that White House counsel Don McGahn has been cooperating with Robert Mueller’s investigation for MONTHS, and he even sat for about 30 hours of testimony. Some believe that McGahn was simply turning on Trump before Trump could turn on him, but whatever the reason for this cooperation, it has Trump spooked, as Ring of Fire’s Farron Cousins explains.

Donald Trump’s been going a little crazier on Twitter than usual in the last few days, and there’s a good reason for that. He found out, much like the rest of the public, that White House counsel, Don McGahn, has actually been meeting and cooperating with special prosecutor, Robert Mueller, for months, and according to this report in the New York Times, McGahn has actually sat down for over 30 hours of testimony and other talks with the special prosecutor. And that’s obviously something that would make Donald Trump lose his mind. However, he assures us on Twitter, he approved that. He knew this was happening, absolutely, but he’s still freaking out about it every tweet he sends. Yeah, that’s not the action of a man that totally knew this whole thing was going on, especially when he compared him to John Dean, the former White House counsel for Richard Nixon, who Dean happened to be the guy that blew the whistle on all of Nixon’s corruptions and kinda kickstarted that whole thing.

So to compare McGahn to that kinda shows that Donald Trump is very worried about what he has told Robert Mueller, and he should be, because here’s what’s happened according to this report. McGahn was actually worried that Donald Trump was gonna try and use him as the fall guy, claiming that he had given him bad legal advice, and therefore, that’s why everything went to hell. McGahn didn’t wanna be the fall guy, he didn’t wanna be in that kind of position, so he preemptively turned on Donald Trump, or at least began cooperating with the special prosecutor. We can’t say for sure if he’s turned or if he’s flipped or if he even had anything to flip. You know, this guy may be completely in the dark, or a little farfetched here, the Trump administration may have done nothing wrong. I don’t think any of us actually believe that, but come on, until we get a firm prosecution, or the real evidence from the special prosecutor’s office, we still have to throw it out there as a possibility.

Nonetheless, Trump’s freaking out, McGahn’s working with Mueller, and, and this is probably one of the best parts here, Donald Trump doesn’t know what McGahn has told him, just like everybody else who’s met with Mueller, and that is why Rudy Giuliani is making damn sure that Donald Trump doesn’t talk to Mueller, because basically, everybody’s already given him all of the information that he needs. I do agree with Giuliani’s assessment that if Donald Trump goes and talks to Robert Mueller, it would be a perjury trap. However, that just shows what a dishonest human being Donald Trump truly is. Mueller, at this point, for the most part, has what he needs. He has the evidence and he has the testimonies, he knows whether or not those two things square up between the documents and the videos and the recordings, and what these people are saying, and if those square up, and Donald Trump comes in and says something to the contrary, that’s easy perjury. So he doesn’t need Donald Trump to go and testify. He doesn’t need to meet with him.

He would like to get his version of things, just to see if he’s going to lie. But at this point, Trump has absolutely nothing to gain from meeting with Robert Mueller, and that’s why he’s so angry about this. He understands that he is in a lose/lose situation because the longer he refuses to testify, the more people think he has to hide. And if he goes and testifies, he’s 100 percent going to commit perjury. So there is nothing he can do to win at this point. Even if he fires Mueller, Mueller’s already farmed out in most of the prosecutions, so those aren’t gonna stop, and then they’ll be required to appoint a new special prosecutor to replace him just like happened with Nixon, and then the next one’s gonna understand the urgency and make it happen so much faster. Nothing Trump can do at this point other than tell the truth. Hell, at this point, Trump may wanna consider flipping on other people to protect himself.

I mean, he should go to meet with Mueller and say, “Listen, I will, in exchange for immunity, I will give you everything I’ve got on all these other folks, and you can send them on to jail and let me go free.” I mean, that is really the only situation in which Donald Trump could win at this point. But he also seems to think that Don McGahn is his personal lawyer, but he’s not. McGahn, as White House counsel, his duty is to the office of the president, not the president himself. Trump has gotten out a little confused, which is gonna come back to bite him because that likely means that he has told McGahn things that now are in the hands of Robert Mueller.