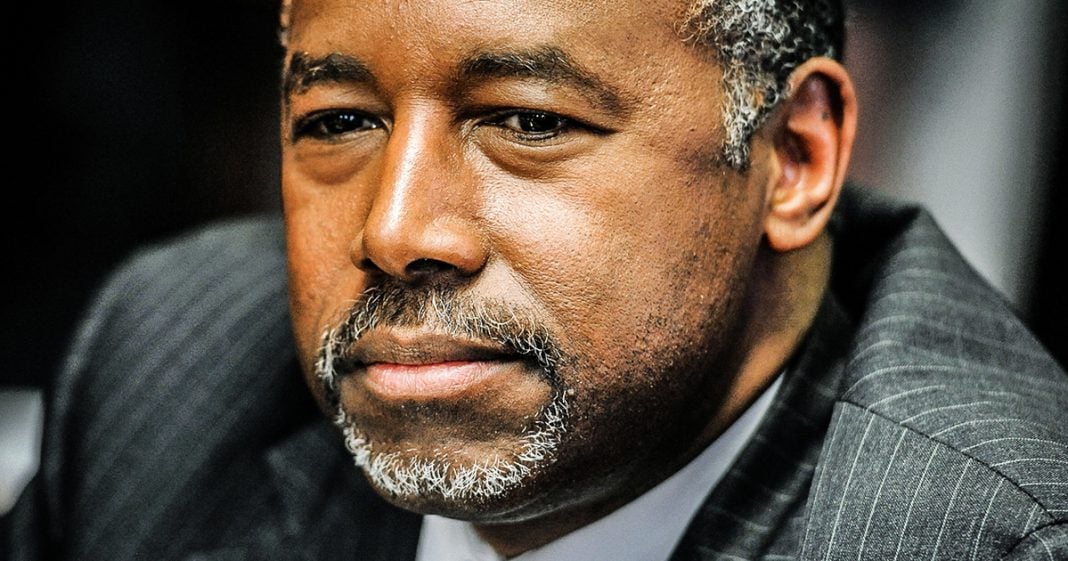 Ben Carson and the Trump administration just came one step closer to eliminating Fair Housing Rules that require cities and states to prove that they aren’t engaging in segregation in order to receive federal funds. A federal judge ruled late last week that HUD no longer had to require recipients to PROVE they weren’t segregating in order to get the funds, moving Carson one step closer to gutting fair housing protections all together. Ring of Fire’s Farron Cousins discusses this.

A federal judge late last week issued a major ruling that’s going to have a serious impact on housing segregation here in the United States and not in a good way. See here’s what happened, a few months ago, I believe it was May, actually, several cities, states joined in a lawsuit against Ben Carson’s Housing and Urban Development cabinet position because they wanted to away with the Fair Housing Act which basically says you cannot discriminate against people you can’t segregate the housing. You know something that should be fairly obvious but it had to become rule in 2015 because it was so back still. They were acting like these federal housing units were all the way back in the 1940s. So they finally passed this rule saying, “Yeah, you can’t segregate and you have to submit plans to us to tell us how you’re going to de-segregate in order to get any kind of federal funds for these publicly funded housing units.”

Well, the judge on Friday ruled that, “Hey, you know what? I don’t think they should have to submit these plans. I don’t think they should have to tell you if their housing units have basically become segregated because there was so little oversight in any of this.” That is a major win for this Administration because now, they’re one step closer to completely gutting that Fair Housing Act that is basically one of the only things left standing that prevents federally funded housing units from discriminating against white people and everyone else.

Even though it’s led by Ben Carson, you know the only black person in this Trump Administration that Kellyanne Conway was able to name the other day, it still is one of the most racist cabinets in this entire Administration. That’s one of the reasons Donald Trump put Ben Carson in charge of it. He knew that this man, regardless of the color of his own skin, was going to whatever Trump wanted him to do and the Trump Administration wants him to discriminate against people and that’s what he’s doing. That’s what this ruling is all about. That’s why they were trying to get rid of that rule in first place and that is what they’re going to continue to do.

Carson, himself, has said, “We want to rid of these rules because they’re just too burdensome.” It’s burdensome to make sure that a group that you know is discriminating against people doesn’t discriminate against people? You are paying them, these are federally funded programs, they get money, our money, our tax dollars from the Federal Government to provide housing for low income people. You, Ben Carson, think that it is okay for them to discriminate against somebody based on the color of their skin. This is absolutely appalling. This is institutionalized racism coming from this Administration being spearheaded by Ben Carson.