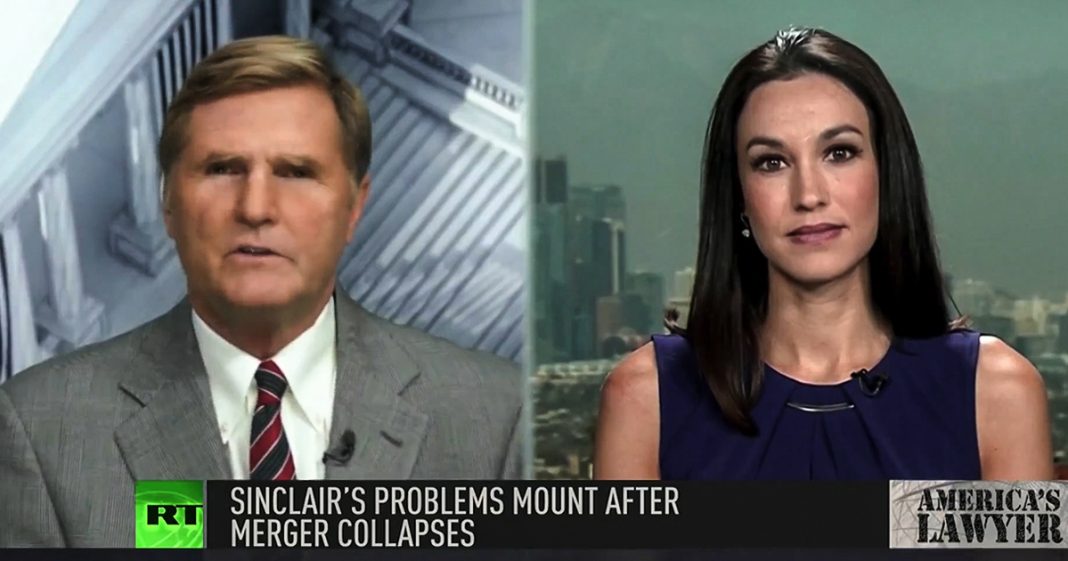 Via America’s Lawyer: Mike Papantonio is joined by RT Corresspondent Brigida Santos to discuss Sinclair Broadcast Group’s controversial 3.9 billion dollar takeover of Tribune Media and why it won’t be happening.

Mike Papantonio: Sinclair Broadcast Group’s controversial 3.9 billion dollar takeover of Tribune Media won’t be happening. As Tribune Media pulled out of the deal with right leaning Sinclair shortly after the FCC hinted that they’d reject the merger. Here to give us an update is RT Correspondent Brigida Santos. Brigida first off, how would this deal if it actually happened, how would it have shaped news programming? You and I have talked about this before. How both of us were like an ick factor on this. We’ve looked at this and we said, “Oh my God, can you imagine Sinclair having that kind of legs? Pretty scary stuff.” What’s your take?

Brigida Santos: Well, Sinclair already owns most TV stations in the United States. It has a clear tilt to the right in content and a lot of its employees, lobbyists, and executives have ties to the Trump Administration. So, if this deal would have gone through it would have given Sinclair the ability to broadcast to 72% of American households. It would have been the largest local conservative TV company in America. Now, current laws cap national audience reach at 39%, but last year Ajit Pai the head of the FCC proposed raising the limit on how many stations a single company can own. Now that is still something that is pending. We don’t know what the actual increase is going to be, or if that’s going to go through, but the FCC did also reinstate the Ultra High Frequency Discount, which does allow ultra high frequency station owners to only be required to count half of their national audience reach, which really just means its clever accounting allows them to have this discount, and count half of their audience reach even if they’re reaching more than that.

Mike Papantonio: Yeah, Brigida you have the same journalism background I did. I went to University of Florida and studied journalism, news editing major. You studied the same thing I did. Do you know what it is? Local news matters, right.

Mike Papantonio: So, now we have Sinclair not just influencing a national front, we’re actually influencing local news, and that was Sinclair’s intent here. Local, local, local is always the story with news. What actions has the FCC commissioners taken that concerned the Tribune Media?

Brigida Santos: Days before President Trump appointed Ajit Pai to take over as the chairman of the FCC, Pai reportedly met with the chairman of Sinclair to discuss relaxing those media consolidation rules. And within the first 10 days in his new position as chairman of the FCC that is when Pai announced these proposed raising of the limits on these national audience caps. So, the timing and nature of these announcements and meetings is very questionable, so now the inspector general at the FCC is investigating whether Pai timed those announcements and made those changes in order to directly benefit Sinclair, which obviously is illegal. Now, I do want to mention that Ajit Pai is countering those allegations against him saying that he did not collude with the Trump Administration to make this deal happen, but again it looks very, very questionable.

Mike Papantonio: Well Pai, let’s call it what it is. He is a corporate toad, and this toad Pai wants to now start effecting social media. First of all, he wants to allow as much expansion as he can, and then the little toad wants to go after social media to where you got organizations like Sinclair that control it all. Let me ask you this because this is what everybody’s asking, do you really think the Tribune here can find another buyer here? I mean 3.9 billion dollars that’s real money. What do you think?

Brigida Santos: Absolutely. I do think that it will find one. And in fact, two other companies were looking to purchase Tribune before this Sinclair deal. So, I’m sure that they’re going to find somebody. It’s a matter of time, but right now they’re just looking for that buyer.

Mike Papantonio: As I look at what’s happened here I find it interesting. Tribune is now suing Sinclair for a billion dollars in damages over breach of contract. This is a tough case. I mean I’d like to tell you that Tribune’s gonna win, probably not because of the way that the FCC handled this they made it almost impossibility of performance, if you follow what I’m saying. You can’t say, well I’m gonna engage in contract that automatically becomes something illegal when the FCC, or the government calls it illegal, or calls it inappropriate. Well then you don’t engage in a contract like that, so that’s gonna be their defense. But, I think it’s interesting that they’re suing for a billion dollars. What’s your take on that?

Brigida Santos: In this case, Tribune says that it’s suing Sinclair because Sinclair did not follow the agreement and do everything that it had to do to get federal approval. And mainly this is over their divestments. Sinclair reportedly failed to divest from certain TV stations. Now it did sell them, but it still maintained ownership over them, so it would not have fallen under that 39% audience cap. So, that’s really what this is about. And again like you said, they’re probably not going to win.

Mike Papantonio: Thanks for joining me, Brigida.