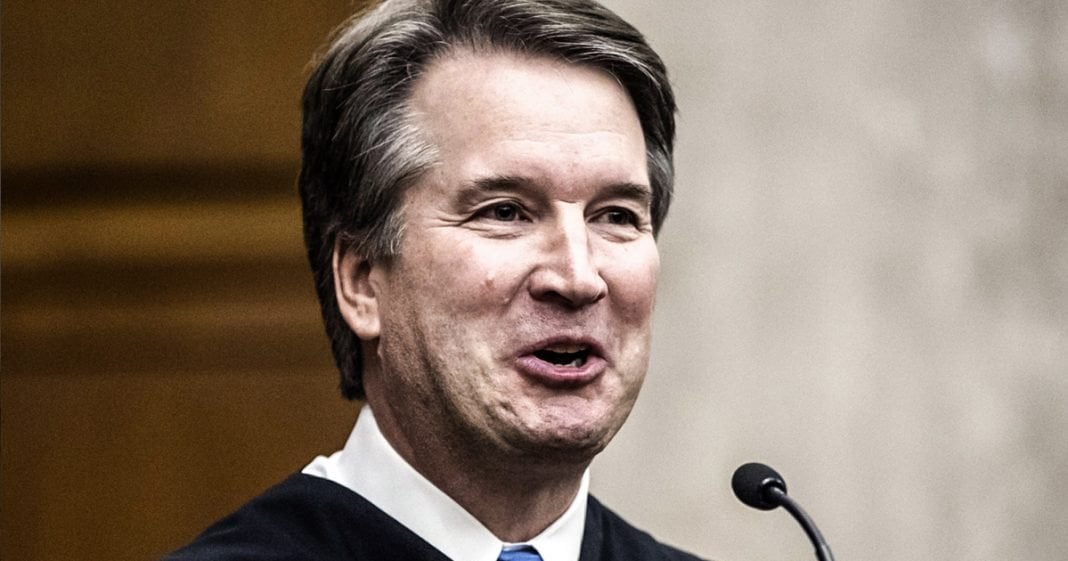 Republicans are still refusing to release the full records of Brett Kavanaugh’s time on the bench, as well as records about other parts of his life. They are claiming that we have seen all we need to see – which is only about 10% of his work – and that this should be more than enough to give him a lifetime appointment to the most powerful court in the country. Ring of Fires’ Farron Cousins explains the many reasons why these Republicans are hiding Kavanaugh’s dirty secrets.

On September 4th, confirmation hearings are going to begin in the Senate for Donald Trump’s Supreme Court nominee, Brett Kavanaugh. As it stands right now, Democrats in the Senate have been trying for several months, at this point, to get all of the information about Kavanaugh’s history released so that they can review it before voting on this guy who’s going to have a lifetime appointment to the most powerful court in the United States.

Republicans are withholding that information. They do not want Democrats to get their hands on it. And so as a result, we have seen about 10% of the entire body of work of this man who wants to sit on the Supreme Court for the rest of his life. 10%. Justices Sotomayor, Kagan, those justices that Obama nominated, they each released more than 98% of their body of work because Republicans demanded it. But now they’re telling us, aided by the ultra-right-wing corporate-funded Heritage Foundation, that “This is just a stall tactic. Democrats are trying to uphold or withhold a vote for Kavanaugh. They’ve had plenty of information.” That is a lie.

When our people are forced to give over essentially 100% of their work, which they should be. There’s nothing wrong with that by the way. But when we give close to 100 and you give 10%, yeah, there’s a problem. That’s not right. If it was decent stuff that you knew wouldn’t hurt him, you wouldn’t feel bad about releasing it. You wouldn’t be trying to hide it. That is why these judges that Obama nominated after releasing more than 98% of their work were still confirmed, right? Because they had nothing to hide. They had nothing they were ashamed of. They had nothing they were trying to keep dark from the American public.

So what is it that these Republicans are trying to hide? Well the answer is that Brett Kavanaugh is a 100% corporatist who will do everything he can to poison our environment, destroy workers’ rights, and hand everything over to corporations that has not already been handed over to them.

Think Progress recently went through and kind of dissected Kavanaugh’s environment positions. Okay? That’s one of the big ones that few people ever talk about. Most people talked about his stance in social issues. Several people have talked about his pro-corporate stances on consumer rights. But the environmental stuff is the one that always gets glossed over, yet that is the only that affects everyone regardless of religion, regardless of sexual orientation, regardless of your race, regardless of whether or not you work or you’re retired or you’re too young to work. Environmental issues actually affect every single one of us every single day. And nobody talks about it.

So kudos to Think Progress for laying this out. And here are a few things they talk about. “In one of his most notorious dissents in a case at the DC Circuit, Kavanaugh wrote a dissenting opinion that excoriates the EPA for prohibiting a mountaintop removal mining company from dumping toxic waste into West Virginia’s waterways.” Now, it gets so much worse, hang on. “Kavanaugh suggested that the EPA needed to weigh habitat destruction from the dumping of mining waste against the impact of a coal company’s stock prices.”

In his legal opinion … He lost. He was in the dissent. He said that, “Yeah, they’re going to destroy the environment. They’re going to poison people, pollute the hell out of them, give them cancer and other kind of illnesses, but my God, won’t somebody think of those stock company prices?” A coal company’s stock prices, excuse me. “Those poor coal executives. Those poor stockholders and shareholders. What are they going to do if they lose a few dollars because they can’t dump their toxic waste into West Virginia waterways? It’s just not fair to them.” That is the man that Republicans want on the Supreme Court.

There is a link to this thing, Progress piece, in the description of this video on YouTube. I suggest everybody go through and read it because that’s just one example. There are plenty more. Brett Kavanaugh is an environmental disaster waiting to happen that will tip the court to the conservatives and ensure that our children, our grandchildren do not have a habitable planet to live on because, as Kavanaugh tells us, “We have to weigh the cost of protecting the environment for the future over the short-term stock gains that corporation coal companies’ CEOs might want to enjoy before they die.” That’s Brett Kavanaugh in a nutshell.