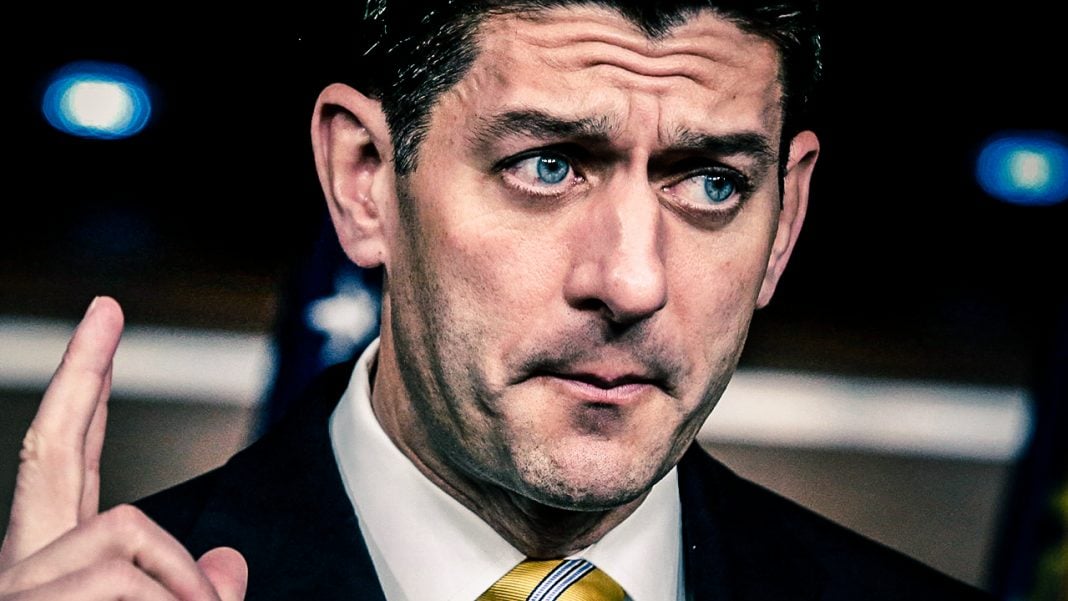 While corporate CEOs and the wealthy elite may already be enjoying the extra millions they’ve already received from the Republican tax cuts, workers are still wondering where their piece of the pie is. The truth – a truth that even Republicans are willing to admit – is that it would take years for workers to see any benefit from the tax cuts, and even then the results would be virtually meaningless. But don’t expect Republicans to admit this publicly – that’s just what they’re saying when the cameras are turned off, as Ring of Fire’s Farron Cousins explains.

Most of us that live in land of reality understand that the Tax Cuts and Jobs Act that was passed by Republicans at the end of last year was never actually meant to benefit any of the workers or average citizens here in the United States. Nonetheless, we are inundated on a daily basis … people like Paul Ryan or even Donald Trump and Mike Pence and groups like the Heritage Foundation telling us that we’re better off now. We’re making more money because of this legislation.

Well, all we have to do to confirm that, that’s not true is look at our paychecks. They literally haven’t changed. I don’t know about you but, yeah, I haven’t gotten a single penny from this tax cut, and I’m not expecting to. I never was because I’m not an idiot. I understand that trickle-down economics doesn’t work. It’s never worked. It can never work in practice because it relies on the good-hearted nature of corporations, and while I don’t work for a corporation that does that, I’m very happy with where I am.

The real people who got the tax cut, these corporations, these Fortune 500 companies, these massive conglomerates, they’re not giving the money to the workers. And this week a new report from the Tax Foundation, which is a right-wing foundation, actually said that, “Ooh, you know what? Workers aren’t going to get anything from the tax cut, but if they do, it’s going to take years and years for them to even get any of it, and when that happens, if that happens, you’d have to make $83,000 per year to even see an additional savings of about $1,200 per year.”

So, we have a right-wing Tax Foundation think tank that is telling us that you would basically have to make $83,000 a year, which is well above median income for the United States, to see a measly $1,200 a year savings. Now, don’t get me wrong. $1,200 a year for most people in this country would be a huge benefit, right? That’s about how much my wife, who is a public education teacher in a public school, spends per year out of her own pocket on school supplies for her classroom because schools are so dangerously underfunded. So, yeah, that would make a difference … but here’s the thing.

Should we be happy about our $1,200 that we’re going to get maybe in a few years’ time? And then they expire in 2025, by the way, because when you look at these corporate CEOs, these bigwigs, the head honchos, the shareholders, the top 1%, they’ve already gotten money back. They’ve already saved millions upon millions of dollars. They don’t have to wait five years to get a paltry benefit from this piece of legislation, and oh, by the way, their tax cuts are permanent. They’re not ever set to expire but ours are.

That is everything that is wrong with this country today. Republicans knew that this would happen. They’ve seen this report from the Tax Foundation. There’s been reports of them saying behind closed doors that they know American workers aren’t going to get squat from this tax cut, but they don’t care. They would never say that publicly, and that’s why they have to come out every day and tell us we’re doing better even though we can see the evidence in front of our faces that we are not.

Yes, the unemployment rate is going down. Fantastic! So are wages, 3% total drop in real wages in the last 12 months when you factor in inflation, 3%. So, yeah, American workers are not doing better. They’re not getting anything extra from this tax cut, but the CEOs, the corporations, the top 1%, they’ve gotten their money already. They’re already happy because they’re going to keep getting more every quarter, every year.

I mean, hell, we had a millionaire Republican congressman, who the day he signed this tax cut bill or voted yes for it, immediately went out that afternoon and bought a multimillion dollar yacht that just so happens to cost as much as he would save per year from the tax cuts. It was a Republican congressman from Florida. I forget his name, but I’ve done a video on it in the past. But, anyway, that tells you everything you need to know about this bill, this legislation, what it was designed to do. It was a giveaway to the wealthy.

We got absolutely nothing from it and we never will, and they’re willing to admit that now, just not in public. They’ll say it behind closed doors. They’ll release these little papers that nobody will really ever take the time to read, and then they’ll hop back on Twitter and tell us how great our lives are now because we’re all just making so damn much money from that Republican tax cut even though, again, we can all look down at our paychecks and see that nothing has changed except for a lot of workers in this country the number on that paycheck has actually gone down about 3%.