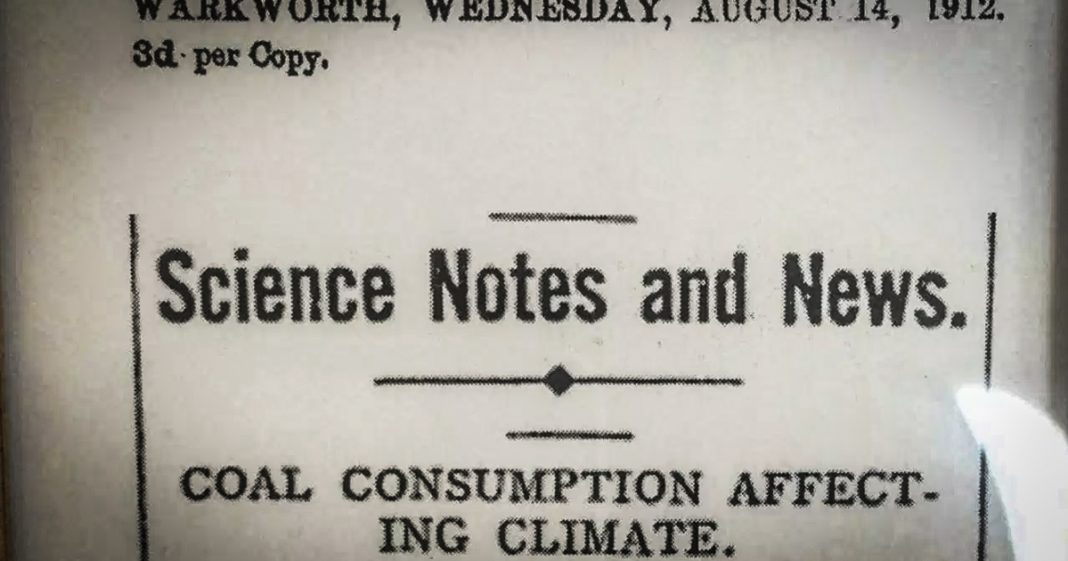 This week, a headline from the year 1912 resurfaced that gave the science-denying crowd a bit of a headache. The headline and subsequent article from over 100 years ago warned that the unrestricted burning of fossil fuels (specifically coal) would create a warming effect all over the planet because of the emissions and gases that arose from the burning and entered our atmosphere. Science today still confirms this, yet the industry’s power is so great that we’re still having a debate on whether or not science is real. Ring of Fire’s Farron Cousins discusses this.

With 24 hour cable news networks, and Twitter out there pushing news stories on us daily, news stories here in the United States and really across the globe really have a very short lifespan. Except, of course, for some of the more important ones. In that case, they can live on for a day or two, but then everybody moves on.

And that’s why this week when a news story from the year 1912 resurfaced, it became such a big deal. And what happened was that in March of 1912, Popular Mechanics warned us here in the United States that the increased burning of coal for energy consumption was increasing the amount of CO2 in the atmosphere, and that build-up of CO2 would create a warming effect for this planet.

Now, that article said they weren’t too worried about it right now, but that this seriously could impact future generations. This was 1912, 106 years ago. Scientists telling us, “Hey, burning of fossil fuels releases more CO2 into the atmosphere, which warms the planet.” And, yeah, at the time, they didn’t think it was that big of a deal for them. Maybe something far off generations would have to deal with.

Well, guess what, folks? We are those far off generations. But we’ve known that, right? I mean, we’ve actually had evidence starting back in the 1850s that scientists had actually linked increased carbon emissions to a warming effect. So since the 1850s, but this one here in 1912 … First published real report of it that we have that was available to the masses.

Popular Mechanics also wrote stories about this 1912, 1930, 1940, 1957, 1964, and 1988, and so on, and so forth since then. But that 1912 to 1964 period was before the public even really knew about this, before scientists were looking at this with any kind of intensity. We had been given multiple warnings. They told us the cause, they told us the effect, they told us what was happening, and we still did nothing as a country.

And today, for the most part, we still do nothing as a country. In fact, as dumb as it sounds, almost 170 years after scientists first linked increased CO2 to a warming planet, we’re still as a country debating whether or not that’s even accurate. Something that the scientific community has known for over 170 years, and yet we still have to have debates about whether or not that’s true. Is it real, is it not? Most of the scientific research on it says 100% it is, and that we’re making it worse. Less than three percent doesn’t say that, and you can pretty much track all the funding for that less than three percent back to the fossil fuel industry.

So, yeah, I think it’s time that we do something about this problem considering that we’ve been being warned about it since at least now verifiably 1912. Those talking points coming from the industry-funded politicians, and think tanks, and media pundits are absolutely bogus. Climate change is real. The burning of fossil fuels makes it worse. Human activity is making it worse. There are alternatives available; we’re just refusing to invest in them as a country at a time when other countries in the world might still be burning fossil fuels, but they’re trying to figure out a way to kick that habit as soon as possible because they accept it. They understand it. They believe that science is, in fact, real, but here in the United States, not only are we pulling out federal investments from renewable energy projects, but we’re also still debating the accuracy of science. That is how far behind we are the rest of the world on the issue of climate change, even after being warned about it more than 100 years ago.