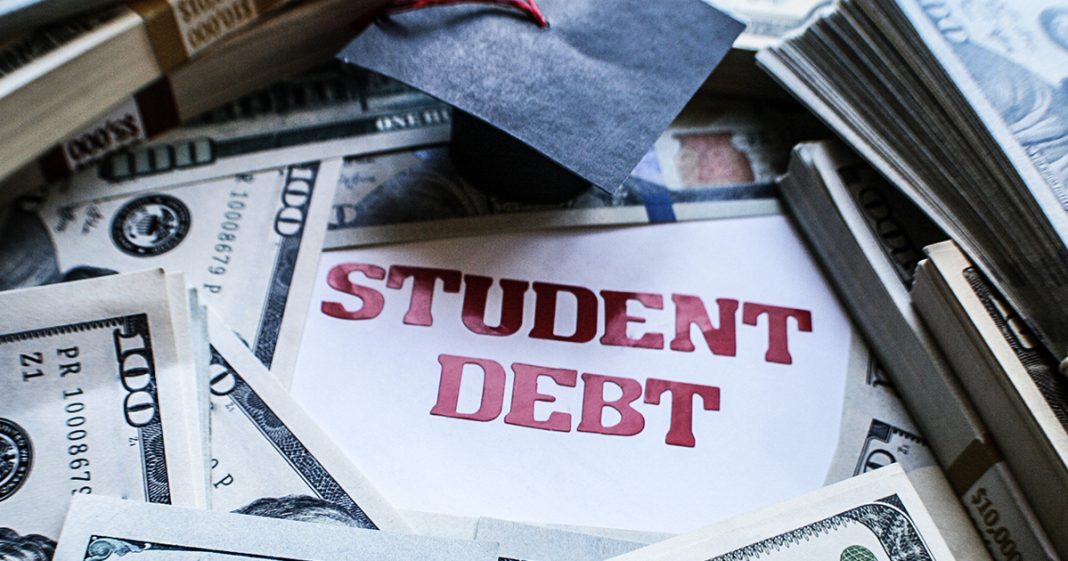 Democratic Representative Jared Polis from Colorado has apparently been listening to his constituents, and he has introduced legislation that would repeal the tax break for the wealthy that the Republicans passed at the end of last year in order to use that $1.4 trillion to forgive student loan debt and bolster the federal grant programs for college students. This legislation obviously won’t pass, but it is the lightening rod issue that Democrats need to rally behind in order to win the midterms, as Ring of Fire’s Farron Cousins explains.

You know, I think it happens roughly every six months. We see a really awesome piece of legislation introduced in the House of Representatives or in the Senate. In this case, the legislation was introduced in the House in committee by Democratic Representative Jared Polis. Polis has introduced legislation. It’s called the Students Over Special Interests Act or the SOS Act. That would not only repeal the massive tax break for millionaires and billionaires and corporations that Republicans passed at the end of last year, but it would then use that money, that $1.9 trillion, to create a student loan debt forgiveness program here in the United States. It would take the 1.9 trillion that we’re giving to already wealthy people.

It would pay of student loan debt for the I believe it’s 40 some odd million Americans who have student loan debt in total of 1.4 trillion. Then, it would take the left over 500 billion that we’re saving just by not giving the wealthy elite a tax break and it would put that into the federal Pell Grant system and other grant systems to help underprivileged people pay for college and it’ll increase federal scholarships, things like that. Money you don’t have to pay back. It would give people an opportunity to get out of debt, to seek higher education or not have to put off a college degree because they want to make the money first, so they don’t have to take out these disgusting student loans.

They’d be able to go right to college, graduate in a few years with a degree that could get them a job and not be stuck paying off 40, 50, $60,000 for the next 30 years of their life. Here’s how bad the problem is right now. There are too many people in this country, millions of them. Polis points this out in his press release about his bill here that have had to put off too many things. They’re either stuck in a dead end job that they don’t want to be in because they have to have that particular paycheck in order to pay off their student loans. They’re not able to go out there and start their own small business because they can’t take the risk right now. They can’t try to switch industries or switch careers because they can’t take that risk of hot having the money to pay the student loan.

They’re not able to buy homes because they can’t afford a mortgage payment because of their student loans. The housing market suffers, small businesses suffer, everything in the economy suffers because of the student loan debts. Polis has the best solution possible. We’re about to add $1.9 trillion to the deficit just to give rich people more money. Why don’t we give that to the people in this country that actually need it? This is the kind of legislation that Democrats need to be rallying behind ahead of the midterms. I know. I’m not naïve. This legislation has a 0% chance of passing and that’s very sad, but that doesn’t mean that even just a symbolic thing like this, having a legislation out there written and ready to go is a bad idea.

This is a smart idea. This is the smartest idea I have seen come from a Democrat in a very long time and I love it. Every Democrat in the House of Representatives should be rallying behind this legislation because this is actually what the public wants. A majority of them would support debt-free college. A majority of them say that the tax cuts for the wealthy were not worth it. You do the math Democratic Party. Which side to you want to be on? Personally, I’d pick the side that goes 100% with what the American public is crying for. That is what Jared Polis did and you would all be wise to take a page out of his book and support this much needed legislation.