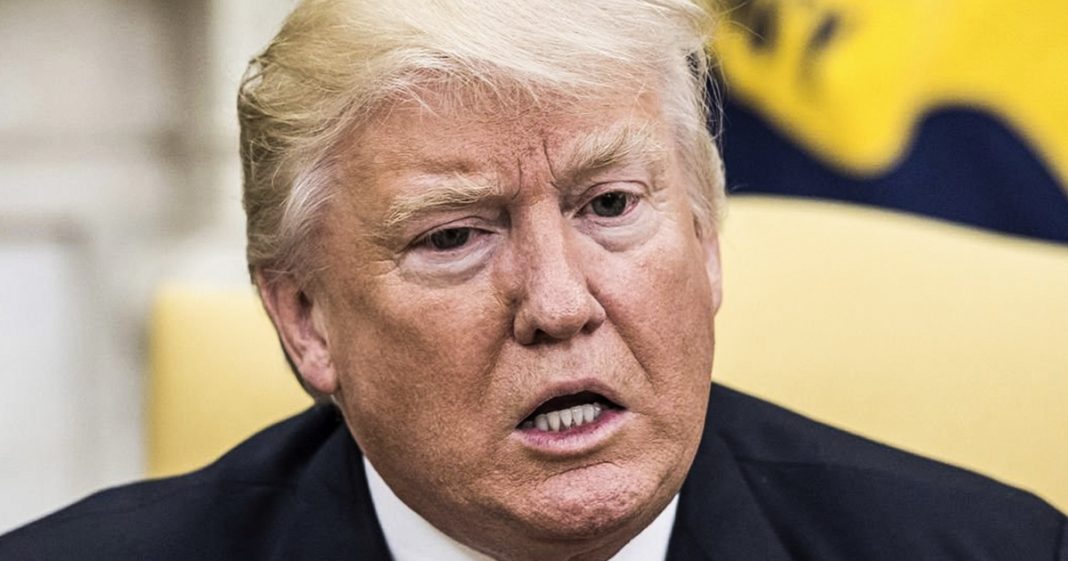 According to a new report by Politico, aides at the White House frequently have to remind Donald Trump that time zones exist because he keeps calling foreign leaders in the middle of the night (their time.) He also doesn’t know how to pronounce words like “Nepal” and “Bhutan.” These kinds of actions are ok, if the one doing them is in grade school, but Trump is a senior citizen who also happens to be the President of the United States and he should absolutely know better. Ring of Fire’s Farron Cousins discusses this.

A recent expose in Politico where they spoke with current and former staffers of the Trump administration confirmed what most of us in this country already knew, and that is that Donald Trump is an absolute and complete moron. According to interviews with these current and former staffers, they confirmed that Donald Trump doesn’t understand time zones, that he frequently in the middle of a meeting would just say, “Hey, let’s call Abe Shinzo from Japan right now. Right now.” And they have to remind him, “Hey, yeah, it’s two in the morning over there. We can’t do that. You know, because time zones are a thing.”

It gets even worse than that, too. They’ve also said that during talks with other foreign leaders, he frequently mispronounces words. He’ll say Nepal as nipple. He actually called Nepal nipple. He called Buton button. I mean just basic, you know, learning how to read type things. You understand that those words, even if you just sounded them out, don’t come close to sounding like nipple and button. And yet that is what our president, a senior citizen billionaire allegedly, and he can’t even figure out how to sound out a word?

It’s not just that they’re stupid, it’s that they seem to revel in being stupid. They really enjoy it, and they want the American public to join with them and embrace the stupid, and just act like this is how we’re supposed to be as a country. No. This is the president of the United States, and yeah. Barack Obama mispronounced words a couple times. Got facts wrong a couple times.

Donald Trump mispronounces word, that’s not an impeachable offense. But when you make no effort to get better, when you make no effort to educate yourself, when you’re not trying to do better, that’s when it becomes a problem. That’s what we saw with George W. Bush and the dumbing down of the US presidency. Hell, it’s what we saw with Ronald Reagan.

And now we’re seeing it 10 times worse with Donald Trump. I mean during the Bush years there were all kinds of books and calendars that came out with Bushisms, all the stupid stuff that he would say on any given day. Like the infamous fool me once, shame you, fool me can’t get fooled again. You know, that was an actual statement made by George W. Bush, and yet that looks like Socrates compared to some of the idiotic nonsense that we have seen come out of Donald Trump’s mouth and seen him post on Twitter.

Covfefe anyone? I mean, again, I am totally okay with the president mispronouncing words, but in this case pronouncing Nepal as nipple and Buton as button, that actually seems more intentional on behalf of the president. Those words don’t look like one another. You sound them out, you don’t even come close to those. I think this is either intentional, and that he’s trying to make fun of these countries, or that he is just so painfully stupid that he wants everybody to think that this is okay. And it’s not.

We should never embrace that kind of thinking here in the United States. You don’t have to be the most intelligent person out there, you don’t have to be a certified genius member of Mensa, but you do need to try to better yourself for the sake of the country, for the sake of your community, for the sake of your children. Always strive to be better, and that’s something that Donald Trump never attempted to do because nobody ever forced him to do, because he had too much money for them to even care. Same thing with George W. Bush.

But we the public, we need to hold them to a higher standard. We cannot continue to let the office of the presidency be dumbed down by these Republican idiots who don’t even take the time to learn how to pronounce the names of countries, or cities, or other world leaders. If they don’t have time to learn that then they shouldn’t be the president of the United States.