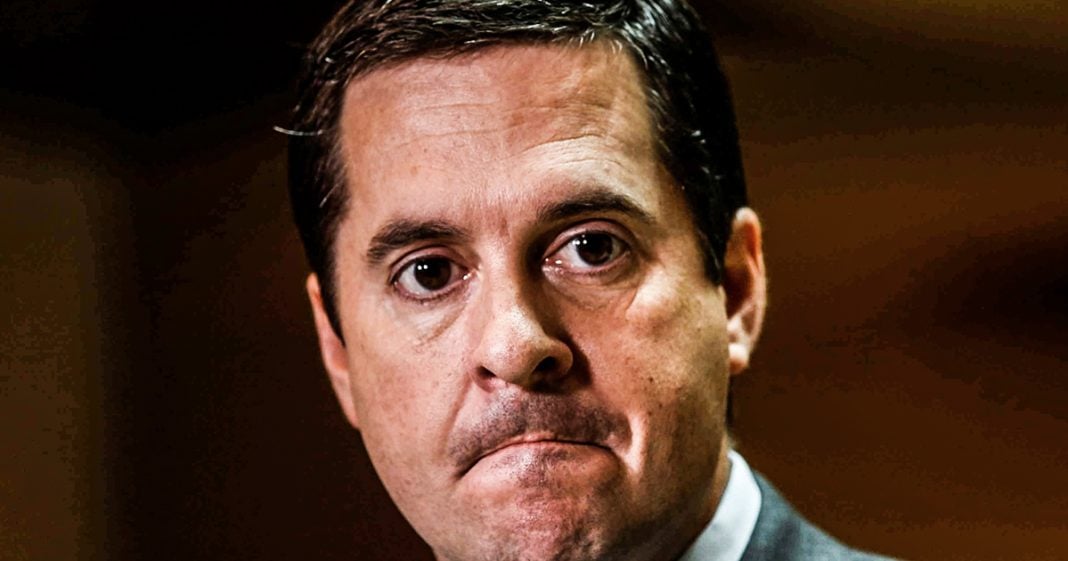 Devin Nunes has never been the kind of guy that could handle criticism, and his thin skin was on full display this week when he panicked and dialed 9-1-1 when a group of protestors showed up outside his office. The protestors were there to make it clear that they don’t want Nunes to cut social safety net programs, and would like these programs to actually be expanded, but that apparently freaked Nunes out a little too much. Ring of Fire’s Farron Cousins discusses this.

Devin Nunes is absolutely terrified of people who do not want the social safety nets in this country slashed to the point of being completely useless. Tuesday of this week Devin Nunes was at his office, and suddenly outside the office some protestors showed up during a little bit of a makeshift rally for Medicaid, Medicare, and Social Security. The message that they were sending Devin Nunes on Tuesday at his office was that, “Hey, don’t cut these programs, because they’re vital to so many American citizens.”

That freaked Devin Nunes out. It freaked him out to the point that he had to call 911 to get police to show up to protect him from these very peaceful protestors who were just saying, “Hey, maybe don’t screw over the elderly and the poor in this country. How about that, Mr. Nunes?” Of course, the people there were also a little unhappy about the fact that Nunes is using his position as the Chair of the House Permanent Select Committee on Intelligence to basically be a mole for Donald Trump, but that wasn’t the big issue. The issue was: Don’t cut the safety nets.

Devin Nunes couldn’t handle it. He called 911 to get the police to come out, not to remove the people, but to protect him. That’s the big difference here. He wasn’t saying, “Get these people out of here. They’re threatening me. They’re terrifying me.” It was, “Please come and protect me, Devin Nunes, because I’m scared to walk outside because these angry elderly people” … most of them were … “are terrifying me.”

Here’s the saddest part of this entire story, too: This is not the first time that Devin Nunes’ office has had to call the police on protestors because they were afraid. This has actually happened multiple times, and that was confirmed by Clovis Police Corporal, Max Garces. He’s the one who said, “Hey, look, this is a bit of a gray area, because, yes, tax dollars are paying for this man’s office here, but they’re renting the office from a private business. So, I’m not sure exactly what to do. Do I protect you? Do I remove the protestors? We don’t know. But, for the love of God, will you just stop calling us anytime people have questions that you need to answer.” He didn’t add that last part, but you could tell that he so wanted to, because he is sick and tired of having his police officers called out there to have to protect this whiny, crying Devin Nunes, who is so cowardly that he can’t even face his own constituents who want to ask some questions about his desire to cut the social safety net in this country.

Nunes is not the only Republican who’s done this over the last year and a half. I mean, we’ve seen Darrell Issa literally hiding on the roof of his building during the healthcare debates, when they were trying to repeal the Affordable Care Act, because he didn’t want to confront people. So, he went and hid up on the roof. These Republicans understand that what they’re doing to this country is wrong, and they’re okay with doing it, as long as they don’t ever have to look anyone in the eyes who has been affected by their policies. The pressure works. The protests work. The rallies work. So, my only advice, as we continue to inch closer and closer to the midterms, is: Keep it up, because these Republicans have proven time and time again that they’re not strong enough to stand up to these people.