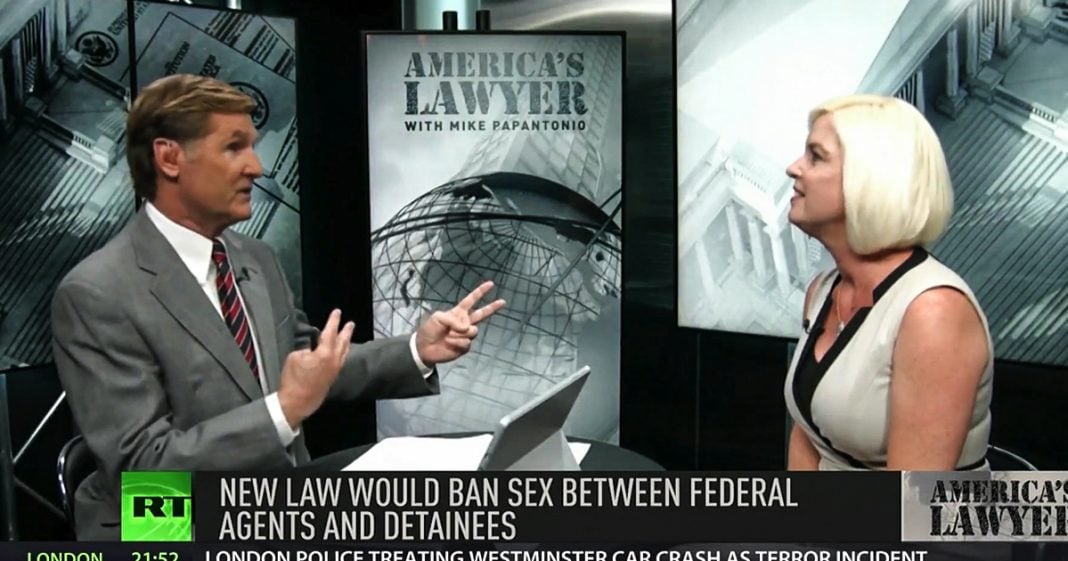 Via America’s Lawyer: Mike Papantonio and Mollye Barrows discuss a new bill that would make it illegal for federal law enforcement officials to have sex with people in their custody.

Mike Papantonio: A new bill would make it illegal for federal law enforcement officials to have sex with people in their custody, targeting a legal loophole that’s allowed authorities to claim that instances of alleged assault or rape were consensual. I mean, really?

Mike Papantonio: Tell me how that is.

Mollye Barrows: Well, it’s a shame, in many, many ways, but it stems from the rape, the alleged rape, of an 18 year old woman in New York City. She was in a car, apparently allegedly smoking weed with a couple of friends. These two vice cops come along in a van, pull her in, drive her around and essentially take turns raping her, is her story.

They let her out on the sidewalk. There’s video camera of her holding herself like this and getting a phone from a passerby. So her claim essentially is that they raped her, the vice cops have since been fired and are pleading not guilty to these charges and their claim is that it is consensual and what’s interesting, BuzzFeed did this story some months back and it’s been picking up steam ever since, but basically, New York is one of more than 30 states that had a loophole, if you will, that didn’t clearly define police officers as people in authority who were basically unable to … people didn’t have to necessarily consent to that.

They could say, “Hey, she consented to having sex with us,” and because they weren’t legally defined as being people who weren’t allowed to have sex with people in custody, they were getting away with it, in some cases.

Mike Papantonio: The argument of the police department here is, we didn’t do it, but oh, if we did do it, it was consensual.

Mike Papantonio: We didn’t do it, but if it did happen, we lost our mind or something, it was consensual. This is another … if you take a look at this, 35 states, in 35 states around this country, 15 only say this is a problem. 35 say yeah, you’re in custody, you might be raped, you might be assaulted, but you know what? The law is going to say there’s really no prevention of you being detained and the officer having consensual sex with you.

Mollye Barrows: Yes, that’s exactly what it is, and so now you have two legislators who are proposing a federal bill that addresses this issue, based on that case, because it came to light that there were all these dozens of states that had these loopholes, where basically, it seems like a common sense law, but because they weren’t legally defining police officers as people in positions of authority, who had power over individuals who could potentially claiming rape or attack or any sort of other sexual act, they were getting away with it, in some cases.

And so you have advocacy rights groups and various others that are saying, hey, this should have already been addressed, and that’s why these two legislators came forward and proposed this bill. There’s no date yet on when it will be voted, but it’s essentially a bill that would close that loophole and it also provides funding for these states that have these existing loopholes to say hey, we’ll give you funding for your law enforcement agencies if you close this. Because people need rights.

Mike Papantonio: I mean, it sounds archaic. Again, this is 2018. And we’re still talking about this issue, whether or not a police officer can have sex with somebody that they’re detained. This is crazy. Here’s what really bothers me. In cases like this involving allegations from a criminal standpoint, you’ve got the DA’s office involved. The DA works with these police officers every day.

Mollye Barrows: That’s it right there.

Mike Papantonio: What’s your take on this relationship? You used to cover the police blotter all over north Florida.

Mollye Barrows: When I first saw this story, it immediately piqued my interest, because there are so many stories you hear as a reporter that you don’t report, because you can’t verify it. There’s a lot of things that people don’t know that go on behind the scenes. And this is stuff that I’ve heard going on for years.

Some that we were able to verify; some that we haven’t. But you think about the nature of the person who’s attracted to law enforcement, a position in law enforcement. Even other police will tell you and they’re quoted in numerous stories as saying, “Some people just want a badge and a gun and a position of power to be able to tell everybody to shut up, they’re gonna do what they want.”

And then you think about the clientele, if you will, that they’re dealing with. They’re dealing with people who are on their bad behavior every day or potentially could be on their bad behavior, so they’re automatically lower down on the credibility rung. So if you’re a police officer, taking advantage of someone, they’re already in trouble, then you’re already having to fight to be believed.

Mike Papantonio: We’ve seen this story so often. Mollye, thank you for joining me. This is a story that unfortunately … It’s absurd that we’re even talking about this-