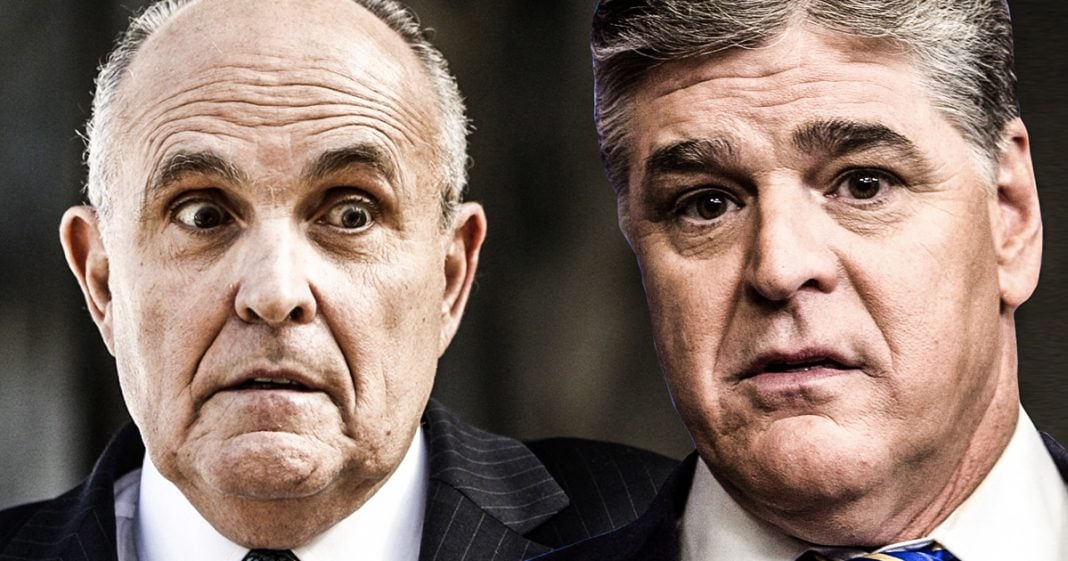 Donald Trump’s attorneys Rudy Giuliani and Jay Sekulow recently filled in for Sean Hannity’s radio show, and a legal expert told MSNBC that this move could certainly get Giuliani disbarred, while others claim that the whole thing is perfectly harmless. The truth is probably somewhere in between, but closer towards the unethical than it is to the innocuous, as Ring of Fire’s Farron Cousins explains.

In case you were not aware, last Friday, Rudy Giuliani and Jay Sekulow filled in as the guest hosts for Sean Hannity’s radio program. Now, Giuliani and Sekulow also happen to be Donald Trump’s attorneys, and why they out of all of the available pool of conservative talent out there, were asked to fill in for Sean Hannity is beyond me, but I think we can all pretty much agree, it’s because Hannity wanted to allow these two Trump lawyers three hours of airtime to trash Bob Mueller and go ahead and convince everybody that this investigation is a complete hoax.

Here’s the thing. Shortly after that happened, we had former federal prosecutor of Southern District New York Mimi Rocah talking to Chris Hayes on MSNBC where she said that Giuliani might actually, possibly he could be disbarred for doing this. She said specifically, “I think Giuliani has been skirting the line, and in my opinion, has now gone over the line in violating the rules of professional conduct as a lawyer.”

Here’s the thing. Is what Giuliani did unethical? Probably. Is it something that could get him disbarred? Absolutely not. There is actually no rule that forbids a lawyer in the United States from going and hosting a radio show, even when you talk about your own case. If you have full disclosure and admit that you’re handling the case, in most states, you’re fine, you’re good to go. There are no rules saying you can’t say anything about it unless you have signed something with the court or with the defendants or the plaintiffs saying that you will not talk about it.

In this particular instance, Mimi Rocah here, this former federal prosecutor, is wrong on this. Giuliani does have every right to do this, unfortunately as does Jay Sekulow, but it certainly does give the appearance of being unethical and I’m sure if you dug down deep enough, you can probably find some kind of violation that Giuliani and Sekulow committed by hosting this radio show but again, probably not going to be enough to get them disbarred or really face any kind of punishment whatsoever.

What it does show is that the relationship between Donald Trump and Sean Hannity is actually growing a little bit closer, with Hannity willing to give up three hours of his radio show to let these two novices who sound like idiots in the air host it, just so that they can go and dispel any of the progress being made by the Mueller investigation or any other investigation into Donald Trump.

That was the point of this. Hannity is working with the Trump Administration to spread as much disinformation as possible, and that’s what all of this is about. Sometimes you kind of have to look beyond the headlines. You have to look beyond the hot takes of certain people saying, oh he’s going to be disbarred. This is hugely unethical. The man is done for. No, but when you get past all the problem here, you do start to see what exactly is happening, and that is that Sean Hannity is going to bend over backwards for Donald Trump to allow him, his attorneys and his staffers the airtime that they need to go out there and convince the public that this investigation is a total witch hunt or a hoax, a witch hunt and hoax by the way that has resulted in almost two dozen total indictments at this point, five guilty please, Manafort probably headed to jail within the next few days at this point if he’s not there already.