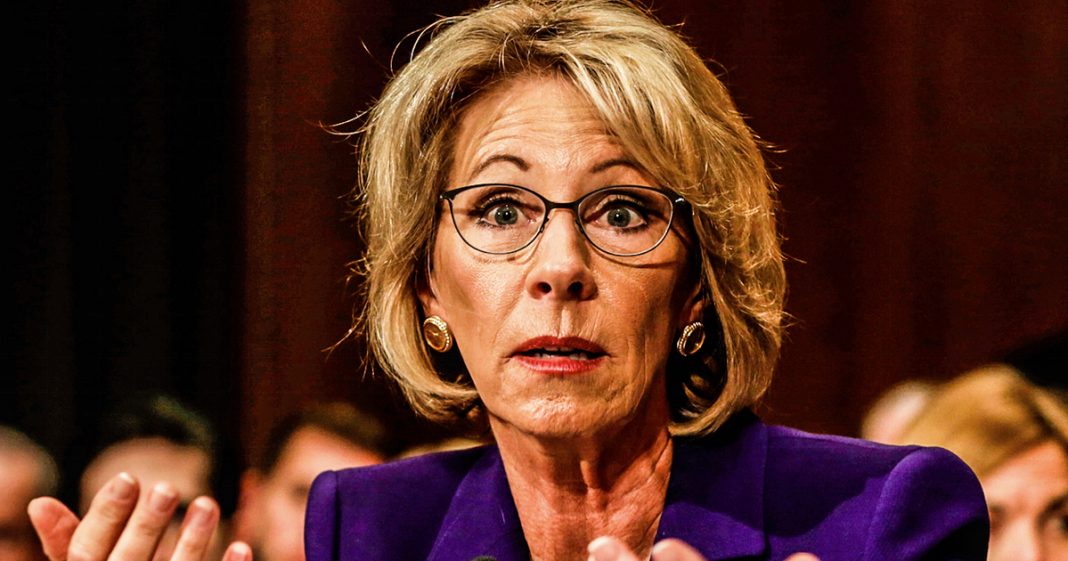 A new rule put in place by Betsy DeVos and the Department of Education will get rid of the oversight of for-profit scam colleges that Barack Obama had put in place to protect students from these predatory institutions. Now these organizations that print out diplomas that are completely worthless for students can once again continue to scam students out of tens of thousands of dollars, all thanks to DeVos. Ring of Fire’s Farron Cousins discusses this.

Secretary of Education, Betsy DeVos. A member of one of the wealthiest families in the country by the way in case you didn’t know that, has decided to resend an Obama era rule the gainful employment rule is what it’s called. And basically what’s going to happen with her resending this rule is it’s going to destroy the regulations, the tighter restrictive regulations that Obama had put on these predatory for profit colleges. Places like Corinthian University, DeVry University and even Trump University before obviously that went by the wayside for being a complete fraud.

Here’s the thing, Betsy DeVos owns stake in companies that own many of these for profit colleges that have been proven to use false advertising. They charge higher rates. Students who go to these colleges are forced to take out larger loans. They basically get a degree that is worth absolutely nothing that other colleges will not accept as a transfer and that most employers do not look at as an authentic degree showing that this person actually knows what they’re doing. So anyway, any kid that goes to this college, any of these colleges, these for profit runs again, DeVry, Corinthian, University of Phoenix, I believe got roped in there. Forgive me if I’m wrong on that.

But, they’re giving you degrees that mean nothing. They’re not worth anything. They’re not giving you a valuable education. They’re not preparing you for any kind of life. They’re not giving you a better opportunity to get a job. They’re saddling you with higher debts than average college students get and you get nothing in return. But Betsy DeVos thinks that, that’s okay. And she wants to get rid of the rule that prevented this from happening. That’s what the Department of Education said in a press release just a few days ago. That’s what they’re working towards. Once again, letting these colleges that scammed thousands upon thousands of students in the United States, letting them go, unabated, unregulated to continue their for profit college scam.

And again, the reason for this, it’s actually twofold. One Betsy DeVos again owns shares of companies that own many of these private college institutions. She also owns interests in companies that hand out student loans. So she wins both ways. If enrollment goes up at these private for-profit colleges, she makes more money. If people have to take out bigger student loans to pay for these for profit colleges, she makes even more money. This woman is riddled with more conflicts of interest than anyone in the entire Trump administration. And yet the only time we see her in the news is when one of her yachts get loose. A $40,000,000 yacht I believe it was, got loose. And oh my God, she was in the headlines for like three days while they were looking for her yacht. One of 10 that she owns by the way.

We need to pay more attention to what this woman is doing to the education system here in the United States because she is absolutely destroying it. And she is destroying it because she makes a profit off of that destruction. This is a woman who is already a billionaire. But even that’s not good enough for her. She needs more, just like most of the greedy CEOs and corporations in this country today. It doesn’t matter how many billions of dollars they have sitting in their private bank account, it’s never enough.