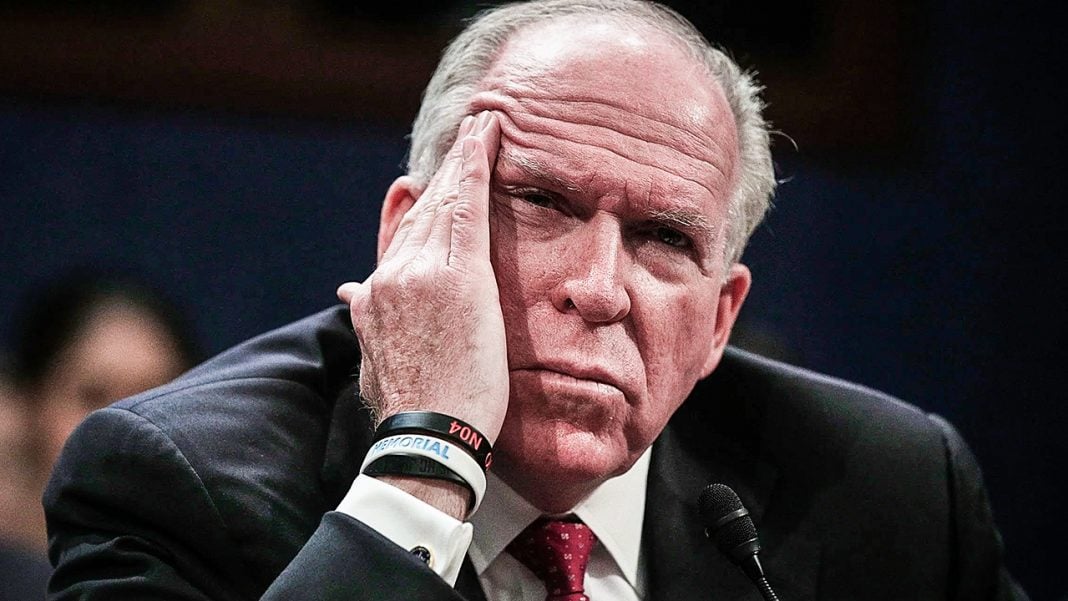 There’s an odd outpouring of support right now for former CIA director John Brennan after Donald Trump revoked his security clearance. Make no mistake – Trump did it to protect himself, but that doesn’t mean we should be shedding any tears for John Brennan. Brennan was one of the architects of the Bush administration’s worst deeds and deserves to be sitting in prison, not getting sympathy from the Left. Ring of Fire’s Farron Cousins discusses this.

This has been a very interesting week here in the United States and, no, not just because of the stupid Omarosa tapes. What’s really stupid right now is the fact that we have Democrats, liberals out there trying to defend the honor of a man like John Brennan. In case you’re not familiar with it, earlier this week Donald Trump stripped John Brennan of his security clearance. Brennan was CIA director for many years under Barack Obama. He also worked in the National Security offices during the Bush administration. Trump revoked his security clearance this week even though Brennan had retired and was no longer part of the federal government. Yeah, he did it for political reasons because he was scared of Brennan, because Brennan was criticizing him. The way Donald Trump did this was 100% wrong and could end up getting Donald Trump in a lot of trouble. If you want to talk about the issue, that’s the part you should focus on, that what Donald Trump did was unethical. He’s going after his political enemies, and that’s going to cause him more trouble than it’s going to save him.

But that’s not what a lot of liberals are out there talking about right now, and it’s driving me insane. They’re trying to stick up for John Brennan and say, “Oh, this is so sad. This is so horrible.” Listen to me, John Brennan should be sitting in prison right now for the rest of his life, and he should have been there already for roughly 10 years. John Brennan was one of the architects of the George W. Bush administration’s extradition and torture policies. That is what this man did in the Bush administration. That’s why he withdrew his own name to be CIA director under Bush because he knew he’d never get to that position because of how he supported the extradition program: shipping these alleged terrorists over to black sites so we could torture them and no one would know about it. He knew he’d never get confirmed so he withdrew his name. Went to work for the National Security Agency where he didn’t have to be confirmed. That’s where he continued these horrible policies that ruined lives, helped make the War on Terror even worse for the United States, and ruined America’s standing with the rest of the world. That is who John Brennan is. This man may not have, quote, deserved to have his security clearance revoked by Donald Trump, but he damned sure deserved to have his security clearance revoked by someone not for the reasons Donald Trump did.

Now, let’s be clear. Donald Trump is probably one of the worst human beings in the United States today if not the worst. I’m sure there’s probably some really horrible people out there committing atrocious crimes that are probably worse than him, but I am willing to say he’s at least top five. He is a horrible human being. Does not deserve to be president of the United States, as corrupt as hell, but John Brennan is too. So can we stop with this defense of him? Can we stop acting like we forgot all of the horrible things that happened during the Bush administration? Just because Bush opposes Trump doesn’t mean we suddenly embrace Bush. The same thing with John Brennan. Hell, even the GoFundMe for Peter Strzok, the fired FBI agent, that thing’s almost up to $500,000. Yeah, Peter Strzok didn’t deserve to be fired, but he also doesn’t deserve a half a million dollars.

I don’t understand what’s happening with some members of the liberal movement here in the United States, but it’s unrecognizable at this point. Peter Strzok, I don’t know how he was as an FBI agent. I’m assuming he was pretty decent. I wasn’t moved by any of the text messages or emails or testimony. I don’t think the man did anything wrong. Shouldn’t have been fired. Again, another political move by this administration. But he’s also an adulterer. Let’s not forget about that. Yeah, people cheat on their wives all the time. Can’t hold it against them. Whatever. I kinda do. It lets you know a little bit about their character. Yet, now we’re giving him a half a million dollars because we feel sorry for him.

People get fired every day. I mean Peter Strzok’s not in any danger of losing his home. He’s not now struggling to pay medical bills. Yet, there’s millions of people every day who lose their jobs that are going to end up losing their homes. They’re going to end up not being able to pay their bills, have their cars repossessed, homes foreclosed on. Medical bills are going to go to collections, and they’re going to get threatening calls and letters every day. Some of them are going to get sued because of it. So how about we work on helping those people? How about we save our sympathy for those people instead of people like John Brennan and Peter Strzok?

Donald Trump is a horrible human being. What he did by stripping the security clearance was incredibly unethical and, again, probably going to get him in a lot of trouble, which he absolutely deserves. But that doesn’t mean that a guy like John Brennan is completely innocent in all of this. His security clearance should have been revoked in early 2009 when he was sent to prison, but neither of those things ever happened. Why? Because when Obama came into office, he said he wanted to look forward not backwards. He didn’t want to prosecute the Bush administration for their torture policies or their extradition policies. That’s why we’re in the situation we’re in today with Brennan suddenly being a liberal hero and Gina Haspel, another architect from the Bush administration, being director of the CIA. That’s what happens when we don’t hold people accountable for their crimes that they commit all over the global. Haspel and Brennan should be in jail. Trump shouldn’t be too far behind them either so don’t get me wrong on that, but they don’t deserve our sympathy. They deserve justice. Unfortunately at this point for these people, it’s never going to come.