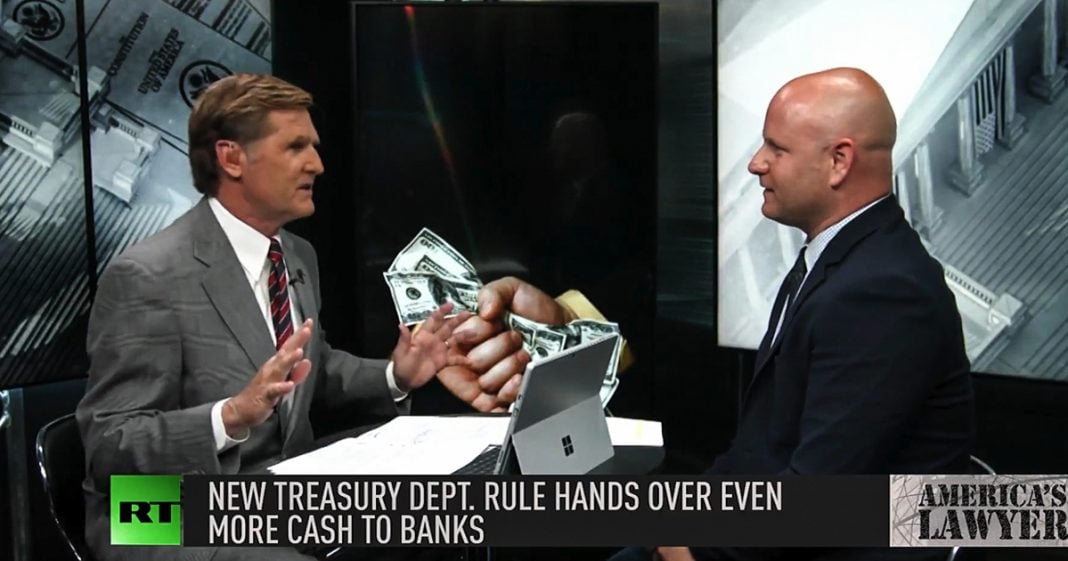 Via America’s Lawyer: Mike Papantonio and Farron Cousins explain how the Treasury Department is working on reclassifying banks in America to allow them access to additional corporate tax cuts that would Net them nearly $2.5 billion dollars.

Mike Papantonio: The Treasury Department is working on reclassifying banks in America to allow access to additional corporate tax cuts. That would net these people about $2.5 billion. Now, here it is. In order for this to happen, you have to say that a bank is not involved in financial transactions. That’s where they had to go. Am I making that up, first of all?

Mike Papantonio: Okay. Second of all, this is something that is being pushed by Mnuchin. I call him Mnuchin the Munchkin. Now, to know who Mnuchin the Munchkin is, this is a guy that if you’ll recall, in foreclosures became a gazillionaire foreclosing on people and working every kind of scam imaginable on poor people. Right? So now we have Trump is backing this bill that says, “Well, you know … ”

They call it the Corker Kickback because it’s also originating from Senator Bob Corker. It’s the Corker Kickback Bill, but it says in order to give banks a bigger tax break, we had to classify them as being an entity that’s not involved in financial transactions. Take it from there.

Farron Cousins: Well this started with the Republican tax cut package that they drafted and passed the end of last year. There’s a thing called pass-through income. They created this little loophole to where if you’re an LLC or and S Corp, you can have what’s called pass-through income. You get an additional tax break because of that, on top of everything else you’ve already got.

Mike Papantonio: Okay, I looked through this like I always do, and I try to find, is there any rational basis for saying that a bank is not involved in financial transactions? I looked, and I read, and I reread this bill. Take a look. Did you see any way to justify that a bank is not involved in financial transactions, therefore we can give them a higher income tax break? If they’re an S Corporation, if they’re an LLC, or if they’re a partnership, this pass-through income is going to benefit them. Did you see any indication at all that says, “We’re changing the definition of a financial institution because … ”

Mike Papantonio: Most interesting about this, there were no hearings on it.

Mike Papantonio: You understand, there were no public hearings. This took place literally in shady back rooms with lobbyists and people like Corker and Trump’s advisors. This is another Trump relief bill, you understand?

Thanks for joining me. These stories every week, they get crazier by the minute. Thanks for being here.