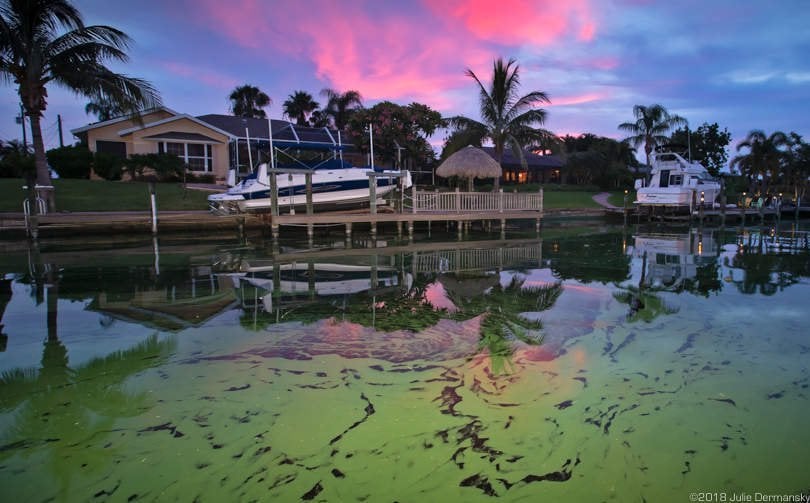 Florida is in the midst of a still-unfolding water pollution catastrophe. Many formerly picture-perfect beaches and posh waterfront neighborhoods are now surreal toxic landscapes where the smell is so pungent, it can make you nauseous.

Parts of South Florida are being inundated by harmful algal blooms, which affect both public health and marine life, including red tide (caused by the alga Karenia brevis) and blue-green algae (more precisely known as cyanobacteria, or Microcystis, which are technically bacteria but commonly referred to as algae).

While both types of toxin-producing algae are normal parts of their environments, the crisis is not. Water pollution and climate change are fueling this supersized toxic algae mess.

Cyanobacteria, or blue-green algae, in a canal near the Cape Coral Yacht Club in Florida.

Fish kill on a beach in Boca Grande, Florida.

The state’s water quality standards, friendly toward agriculture and real estate development, result in the release of an abundance of nutrients including phosphorus and nitrogen into the water. This influx of growth-inducing nutrients causes marine and freshwater algae populations to explode in what’s called a “bloom.” These blooms can use up much of the oxygen in the water, causing aquatic life to die, in addition to the potentially fatal toxins these algae release.

Storm run-off from agricultural and urban landscapes, laden with fertilizers and animal manure, and badly maintained septic systems contribute to the current crisis. On top of this, massive releases of polluted freshwater, laden with cyanobacteria, from Lake Okeechobee are ending up on both of the state’s coasts. And when the freshwater cyanobacteria hit the saltwater, they die, creating even more nutrients that feed the red tide.

Photographer’s sneakers on a concrete seawall on the side of a toxic algae-filled canal in Cape Coral, Florida.

Cyanobacteria in the water at the Sovereign Yacht Sales along the St. Lucie River in Stuart, Florida.

Toward the end of July, I went to Southern Florida to document the ongoing environmental disaster. I walked Gulf Coast beaches littered with dead fish and sea turtles. Red tide is impacting the coast from Sarasota to Marco Island. I also visited the cyanobacteria-filled canals in Cape Coral before heading to the east to the city of Stuart, a popular tourist destination on Florida’s Treasure Coast.

Jim and Sally Mullins, who live in Cape Coral, agreed to let me photograph their portrait on their boat ramp as long as I did it quickly ― cyanobacteria filled the canal. They bought their home there 10 years ago, and permanently relocated from Connecticut last year. But they regret it. The stench outside their home is unbearable, and they are considering moving elsewhere because of possible health implications.

Jim and Sally Mullins outside of their home in Cape Coral, Florida.

The short-term health impacts of direct exposure to harmful algal blooms, according to the Environmental Protection Agency (EPA), include abdominal pain, headache, sore throat, vomiting and nausea, dry cough, diarrhea, blistering around the mouth, and pneumonia.

The long-term effects are still unknown. Some scientists studying cyanobacteria  suggest it could bring on a mysterious disease similar to Alzheimer’s and Parkinson’s. Some of the same scientists also are investigating if the neurotoxin BMAA, produced by cyanobacteria, is the direct cause for the rise in cases of ALS (Lou Gehrig’s disease) and Alzheimer’s.

Juergen Kreuzer, a charter boat captain who relocated from Germany to Cape Coral, is also questioning his decision to move there. Most of his clients are canceling their trips, and those who don’t can no longer meet him at his boat launch because he says it smells like a “sewer filled with dead things.”

A Global Problem Made Worse in Florida

Crossing the state, I drove along the southern banks of Lake Okeechobee, stopping at locks in Canal Point in Palm Beach County, where I found an endless stream of algae-laden water being released. At Port Mayaca in Martin County, I watched green waves crash along the lake’s banks.

Blue-green algae, or cyanobacteria, in a canal at Canal Point, released from Lake Okeechobee, headed toward the Treasure Coast.

Toxic algal blooms are not unique to Florida. They have become problematic in other parts of the world as temperatures rise and water pollution worsens. In Toledo, Ohio, a bloom in Lake Erie caused a tap water ban in nearby towns in 2014; the next year, the coast of Qingdao in China was hit with an algae bloom.

Unique to Florida’s toxic algae problem are water releases from Lake Okeechobee, the country’s second largest freshwater lake, which sits north of the Everglades, between the Gulf Coast and the Atlantic. At times this summer, 90 percent of the lake’s surface was covered with the toxic algae. The shallow lake is an ideal breeding ground for toxic algae blooms because they feed off the nutrients in water pollution from dairy farms, beef operations, and vegetable row crops to the north, and industrial-sized sugar-cane fields to the south.

Alligator swimming in a toxic algae-filled canal connected to the lock in Canal Point, Florida.

Lake Okeechobee’s water level is controlled by the U.S. Army Corps of Engineers. When the water level gets too high, as it did in late May this year, the Corps releases water to the east and west to prevent flooding. The toxic algae-filled water is released into the Caloosahatchee River leading west to Fort Myers, and into the St. Lucie River heading east to Stuart.

The release of billions of gallons of water was paused briefly after public outcry, when canals in Fort Myers and Cape Coral were inundated with green slime in June. The canals in Stuart are also being affected, but the impacts on the east coast came later and have not been as widespread as on the west coast.

Dead fish trapped in the cyanobacteria in a canal in Cape Coral, Florida.

Though heavy rainfall from Hurricane Irma last fall and above-average rainfall this spring made it imperative for the Corps to act to avoid flooding, those living near the polluted water and algae infestations don’t think the government is doing enough to protect them from the toxic brew filling their canals.

Stuck Between a Lake and a Hard Place

Since I left Florida, the crisis has gotten worse. There is no quick fix for the problem, a point clearly made at a July 31 pubic meeting held by the Corps about the water levels of Lake Okeechobee.

Lt. Col. Jennifer Reynolds, a deputy district engineer for the Corps, addressed and took questions from a crowd of more than 300. She explained that when the lake’s water level approaches 15 feet above sea level, the Corps must release water. A major rain storm could lead to catastrophic flooding and the loss of lives and property.

When it comes to pollution in the lake, she said: “The state is responsible for setting and maintaining the water quality standards.” After being asked if cutting off the flow of nutrients into the lake would solve the problem, Reynolds responded, “Absolutely. The best way for us to curb algae growth is to get rid of the nutrients in the water.”

As for a fix to the South Florida algae crisis, Reynolds explained that the federal and state governments are working on building a watershed south of the lake to hold additional water. That would mean less of Lake Okeechobee’s water, and its toxic cyanobacteria, would need to be released to the east and west. She said that there are dozens of other projects requiring billions in funding in the years ahead. But none of them are quick fixes. Some are being planned through 2030 and beyond.

In the short term, Reynolds called for reducing the flow of nutrients into the lake, but regulating water quality standards in Florida has been an uphill battle. Earthjustice sued the EPA on behalf of several state and national environmental groups, to force measurable pollution limits in 2008. As part of a settlement in 2009, the EPA agreed to set enforceable, legal limits on the pollution that generates toxic slime in Florida’s waterways, but the standards were rescinded before they were implemented, after the state challenged the EPA’s decree.

The Florida residents I spoke to are all paying close attention to candidates’ stances on the toxic algae crisis. And the non-partisan group bullsugar.org, which advocates for clean water, is looking to make the upcoming elections about a single issue: clean water.

Many advocates for clean water, including Calusa Waterkeeper’s John Cassani, point to the overall failure of the state’s water management system and a lack of water pollution standards as major factors creating the nightmarish landscapes: beaches littered with dead fish and canals lined with fancy homes and boats,that are socked in by thick layers of florescent green and blue algae.

Cyanobacteria in a canal near the Cape Coral Yacht Club in Florida.

Juergen Kreuzer, on his boat at the end of a toxic algae filled canal  in Cape Coral, Florida.

Republican Gov. Rick Scott is challenging Democratic Senator Bill Nelson for one of Florida’s Senate seats this fall. Though Scott declared a state of emergency over the algae bloom, which allows the federal government to fast-track the fortification of a dike protecting Lake Okeechobee, he has played a role in weakening regulations that protect water. He also severely cut the state’s environmental regulatory agency by slashing the agency’s staff and budget and tapped industry-friendly people to run it.

Capt. Shannon Hoeckel and Areila Spurgeon with a dead sea turtle found on the beach in Boca Grande. Florida.

Capt. Shannon Hoeckel of Boca Grande, an island in the Gulf with exclusive beaches and a world-renowned fishing spot, is warning his clients not to come and is returning their deposits, though it hurts his business. He said it is the moral thing to do: “You can’t let people come visit ― especially not children.”

He plans to vote for whoever he thinks will best protect the water.

This article was reprinted with permission from DeSmogBlog.com.