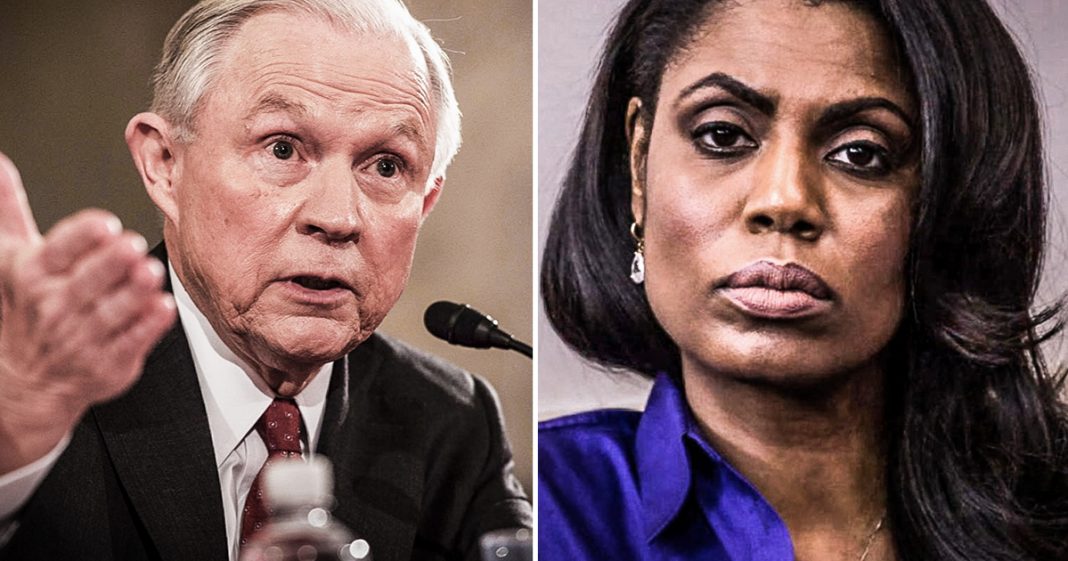 Donald Trump has made it clear that if you cross him, he’ll retaliate against you, and that’s exactly what’s playing out behind the scenes of the very public feud between the president and former Apprentice contestant / White House employee Omarosa Manigault-Newman. Trump has allegedly become so irate that he’s actually asked Attorney General Jeff Sessions to arrest Omarosa for violating her non-disclosure agreement, and Ring of Fire’s Farron Cousins explains how such a request could backfire on Trump.

Well, it’s time for our daily dose of Omarosa versus Donald Trump drama, and today certainly doesn’t disappoint. We found out yesterday in a report by Gabriel Sherman from Vanity Fair, and he has sources inside the White House, that Donald Trump is so furious at Omarosa right now about her new book, and the tapes that are coming out, and everything else that’s going on with this, that he is reportedly wanting Jeff Sessions to arrest Omarosa just to shut her up.

Now, Jeff Sessions as Attorney General of the United States does not actually go out and put handcuffs on people, read them the Miranda Rights, and shove them in the back of a cop car, but these aids also point out that Trump has not really specified what crime it is that they want Jeff Sessions to arrest her for doing. He just wants her to stop talking and to get out of the limelight because they believe that it is sending this entire administration, and Trump himself, on some kind of death spiral right now. That’s the word they used, “death spiral.”

So anyway, here’s where we’re at with this whole nonsense, and I say nonsense because this absolutely is ridiculous, the fact that we’re having to talk about a former reality TV show host, who somehow became president, and a former reality TV show contestant, who somehow worked in the White House, and snuck in a recording device, and now we find out she may have a many as 200 different recordings of people in Trump’s inner circle. This is utter insanity at this point, and yet that is what we have allowed this White House to become by allowing Donald Trump to be the president of the United States.

This was completely predictable given the kind of person that he is, but nonetheless, he is afraid of what Omarosa knows of what evidence or recordings that she has, and he wants her to stop talking. Now, as I’ve pointed out, typically in the past when Donald Trump wants somebody to stop talking, they sue them for slander or libel. They haven’t done that with her, which again, points to the fact that what she is saying is not true, or that Trump lacks sufficient evidence to prove that she is slandering him in court.

But they’re not doing it in this particular instance with Omarosa, they’re only suing her because she allegedly violated the non-disclosure agreement that she signed when she worked for the Trump administration, which those non-disclosures are more than likely illegal anyway, considering these people are public servants paid by tax dollars, and not private employees of Donald Trump himself. That’s why they’re suing for arbitration and not trying to take it to an open court.

Either way, Trump is losing this fight, and I couldn’t be happier about that, but still very sad about the fact that this is something apparently we have to talk about, because this is how stupid political news has become today, that we’re again, talking about a former reality TV show host, a former reality TV show contestant, who are in a bitter feud over what she may or may not have recorded that reality show host saying while he was president of the United States. Now, that is a run-on sentence that I never thought I would ever have to say in my entire life.