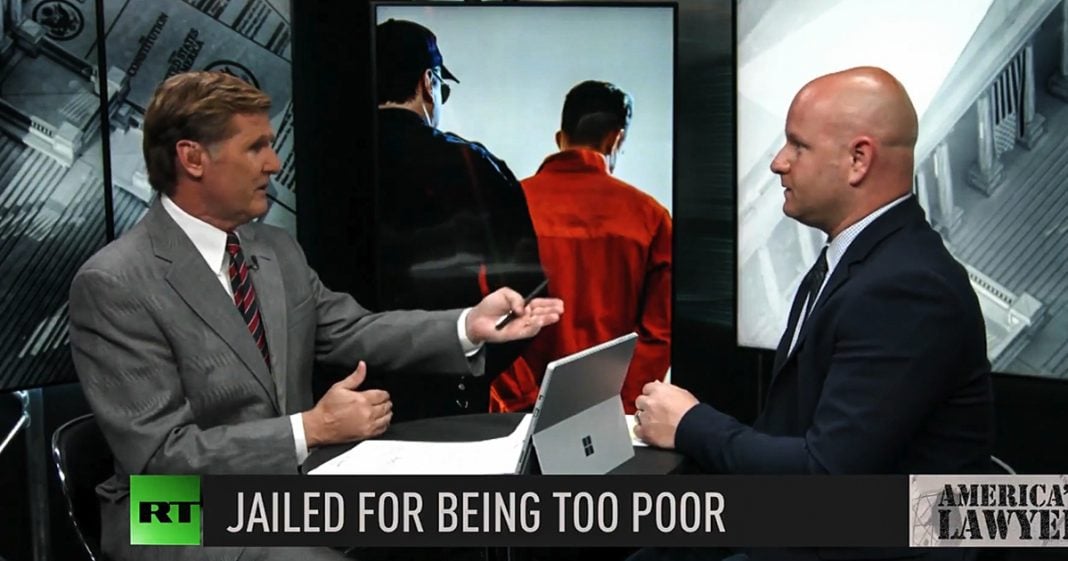 Via America’s Lawyer: Mike Papantonio and Farron Cousins talk about the latest developments from a Judge in New Orleans who has been ordered to stop putting people in jail for being poor.

Mike Papantonio: A magistrate judge in New Orleans has recently ordered, he’s ordered to stop putting people in jail for being poor. He was able to do this by setting unrealistic bail numbers for people he knew were unable to pay the price. Now this, what I love about this case is I know Judge Fallon, the federal judge. We’ve appeared in front of him, he’s a very, very talented trial judge. Probably one of the most talented, literally almost one of the most talented judges in the country, trial judge.

So now, he took a look at this Cantrell, who’s an absolute nut, there’s no way. This magistrate judge Harry Cantrell, is a nut. No other way to describe him. What did he tell Judge Cantrell?

Farron Cousins: Well he said, “You’re locking people up for nothing more than not having enough money to pay bail. You’re not taking into consideration whether they can pay, you’re not looking at their financial, you’re not looking at the severity of their crime, when even setting the bail.” So he’s ordered them to stop, but this guy Harry Cantrell, this magistrate judge in New Orleans. If you commit any kind of crime in the city of New Orleans, you have to go before Cantrell. There are no other magistrate judges, he sets the bail for every single person, and that’s it.

Mike Papantonio: Okay, so with the bail setting, the problem is, once you can’t do that, you’re in jail.

Mike Papantonio: In other words, your jail sentence starts, and it really is literally because you’re poor.

Mike Papantonio: And it usually starts around $2500, is what this judge, the magic number for everything. Take off on the issues that, first of all, he has to take evidence, there needs to be some testimony about what the ability to pay is, he doesn’t do that. He has to take into account the risk of flight, he really doesn’t do that. It’s almost an automatic stamp that seems to be occurring here, and Judge Fallon spanked him about this.

Farron Cousins: Yeah. And Judge Fallon also got onto him, because of the fact that he requires you can’t use cash bail, which means if you have relatives that could loan you the money to pay the bail, no. You’re required to go through these private, for-profit bail bonds groups, that also happen to be giving a kickback to the New Orleans Criminal Justice System, and that makes up for 25%, I think it is, of the total funds that this court system has.

So it’s a lot of Pay to Play, a lot of unethical behavior, no due process, and Fallon, as you pointed out, absolutely said, “This is borderline criminal here.”

Mike Papantonio: Plus equal protection argument, there’s due process argument, the Constitutional arguments are endless. Interesting story I remember you doing a couple years ago, where you talked about how some jurisdictions are using civil fines now to put people in prison. This is similar to that, explain that story.

Mike Papantonio: Yeah. It does.

Another story came out on that this morning.

Farron Cousins: About how bad it is in this country. So we’re seeing it today, even after this decision.

Mike Papantonio: These people actually end up going to prison, not just for things like, “I didn’t pay a parking fine”, not just “I couldn’t pay for probation payments”. It’s having to do with “I can’t pay this bill.”

Farron Cousins: Right, right, “I couldn’t pay this medical bill. I couldn’t pay for a doctor’s visit or whatever it was.” Things that are not criminal offenses, those can be dealt with in civil court. But now they’re changing them.

Mike Papantonio: Basically what we’re doing is a debtor’s prison. Farron, this is a story, every year it seems to be getting worse, when it comes to private entities, corporations, using the criminal process to put people in jail because that person’s not making a payment.