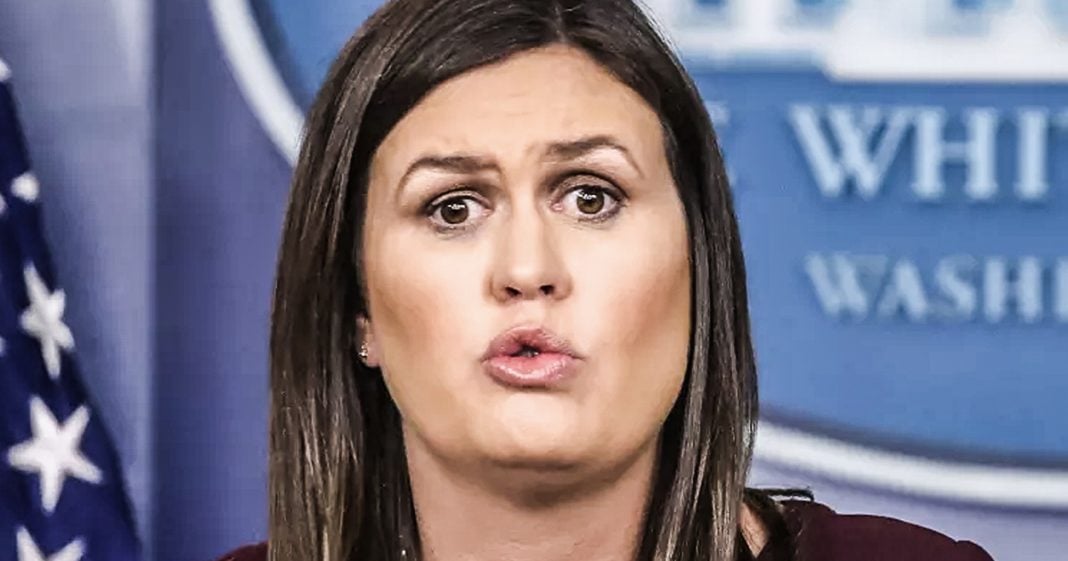 It isn’t very often that Sarah Huckabee Sanders will admit that she’s wrong, but this week she finally sucked it up and admitted that a claim that she had made earlier in this week was based on false information from another government department. Her claim was that Trump has already created more jobs for African Americans than Obama ever did, a claim that is 100% false. But there’s a reason the administration likes to push these bogus numbers so much, as Ring of Fire’s Farron Cousins explains.

To say that Sarah Huckabee Sanders lies would probably be the understatement of the century. This woman lies like the rest of us breathe oxygen. Earlier this week, something interesting happened. Yes, she got caught lying, which pretty much happens on a daily basis, but she apologized for it and then corrected herself on Twitter. That to me was the most amazing thing.

Here’s what happened. During Tuesday’s White House press briefing, Sarah Huckabee Sanders said that Obama only created 195,000 jobs for African Americans, but Donald Trump has created 700,000 jobs for African Americans, so he’s obviously not racist. That’s why she said that, that was the whole point. She was fighting back against accusations that there’s a tape of him saying the N-word, so she tried to say, “No, no, no, he doesn’t use that word, because he created more jobs for them than Obama.”

As it turns out, that’s not true at all. She had gotten that number from the Council of Economic Advisers. They had tweeted out that 195,000 African American jobs under Obama. It was completely false.

The real number is actually right around three million jobs for African Americans during the Obama administration, and Sarah Huckabee Sanders did finally come out and say, “Yeah, I’m sorry. This group gave me the wrong info, they have apologized to. We all had wrong info. We’re very sorry. But,” she said, “we’re not going to apologize for the 700,000 jobs for African Americans that Donald Trump has created, because that’s hella cool.”

Well, here’s the thing again, and this is why she’s doing this. It’s because right now, Donald Trump is facing more accusations of racism than he has faced during his entire administration. We’ve seen it here and there, we see it frequently, but in the last few days, things have reached a fever pitch, and they’re worried that there may actually be a tape that exists of him saying this horribly racist things.

Others who have worked with Omarosa have corroborated this story. They say that, “Yes, he did.” So Sarah Huckabee Sanders really needed a win. If you’re trying to come up with a win to say that your boss is not racist, you don’t do it by trying to slander the only black president the United States has ever had. Do you see the irony there, Sarah? You tried to say that your guy’s not racist, look how bad the black guy is.

You could have fact checked this. The Council of Economic Advisers could have fact checked this. I’m sure it would have taken all of five minutes to do a quick search through the Bureau of Labor Statistics and find out what the actual numbers are, because those are readily available, most of them in handy little chart form so you don’t even really have to read the numbers, you just have to match the high note to the left side, and you’re good to go.

But you couldn’t even take the time to do that. You jumped at the opportunity to slander the first and only African American president that this country has ever had, just to try to prove that your boss is not a racist. That was the most ass backwards thing that you could have possibly done to defend your boss.

But hey, at least in this particular instance, you admitted that you were wrong. Let’s hope that maybe this is a trend that’s going to continue, and maybe every time you lie, the next day you’ll come out and say, “You know what? I lied to you all about that. Here’s the actual truth.” I’m not going to hold my breath for you to do that, but hey, never hurts to have some wishful thinking.