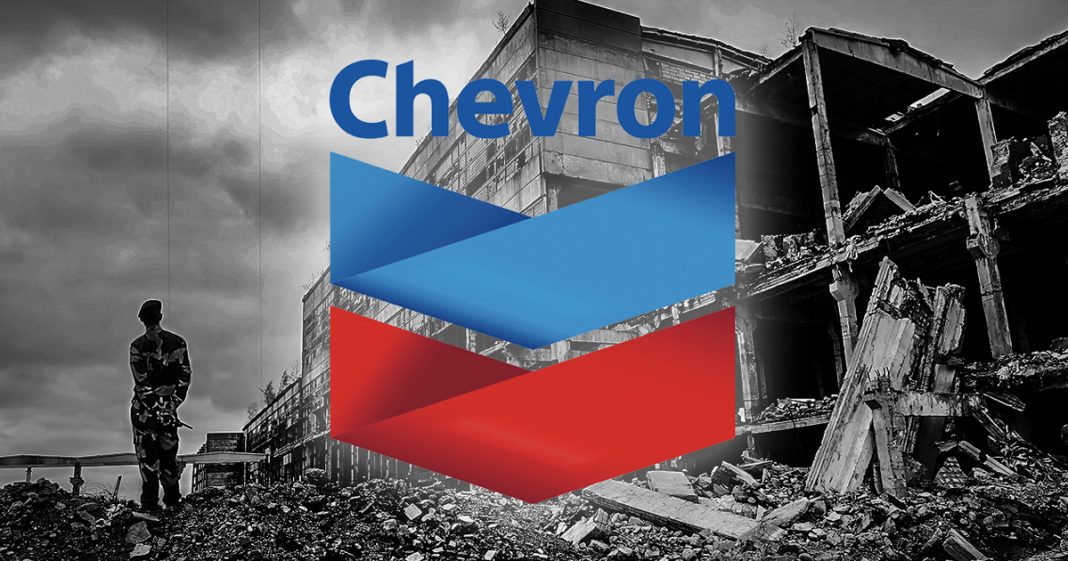 The Chevron Corporation was given a major legal victory this week when a federal judge ruled that they cannot be held liable for payments that they made to dictators like Saddam Hussein – payments that eventually funded terrorism. These kinds of lawsuits are tricky, and the judge didn’t dispute that Chevron made the payments, but they still were allowed to walk. Ring of Fire’s Farron Cousins explains why these terrorism cases are so complex.

A federal judge this week handed Chevron Corporation a massive legal victory by ruling that they cannot be held liable for all of the millions of dollars that they funneled to terrorists and Saddam Hussein in the early 2000s in exchange for super cheap oil. Here’s what Chevron was accused of in the particular lawsuit. As I mentioned, funding terrorist and Saddam Hussein, they funneled a litter over $20 million according to the complaint to Saddam Hussein. This money then went into a fund and this fund was used by suicide bombers and other terrorists to go out there and commit these atrocities in the Middle East.

In exchange for giving Hussein $20 million Chevron was able to come in and buy oil from the Middle East in areas controlled by Saddam Hussein at a much lower cost than everybody else was. They got cheap oil, he got $20 million to fund terrorist activities, everybody wins. And according to this judge, yeah Chevron I guess you can get away with this.

And to be honest, it’s not necessarily the judge’s fault here. I mean it’s hard to say that this judge did something to just help out Chevron. The way that these terrorism cases work is incredibly complex, and they are incredibly difficult to win. Here’s what happened in this particular case, and this is very common, Chevron gave the money to Saddam Hussein. Saddam Hussein puts it into this fund and that fund is then used to fund terrorist activities. But, it’s not just a big one single bank account that sits there. They funnel this money, they launder this money through different banks, major banks operating in big cities in Europe and here in the United States. They help launder the money for these terrorist organizations, as report after report has shown us.

UBS, HSBC, some of the biggest terrorist money launders in the world today. They launder the money, the money goes back to Hussein, and then that money is used to fund terrorist activities. Well in a terrorism lawsuit you have to be able to prove that the money that came from Chevron and went to these terrorist groups was the exact same money that was spent on the terrorist activity, and unfortunately the plaintiffs in this case, because of the money laundering activities of these terrorist friendly banks, they weren’t’ able to show that those exact bills or whatever it was that Chevron gave to Hussein were the same ones used to fund those terrorist attacks.

That’s why these cases are so difficult, but that doesn’t’ mean that they are unwinnable. There have been plenty of cases brought by independent lawyers, and including the Department of Justice has gone after a few, where they have actually managed to hold these banks accountable for laundering money for terrorists. They have sued governments and been successful, for them using money to fund terrorist activities, so they are winnable but they are incredibly difficult. But I think we can all agree at this point that Chevron just got away with a very big victory, even after it was pretty crystal clear that they had been funding terrorist activities in the Middle East, just so they could get their hands on some cheaper oil.