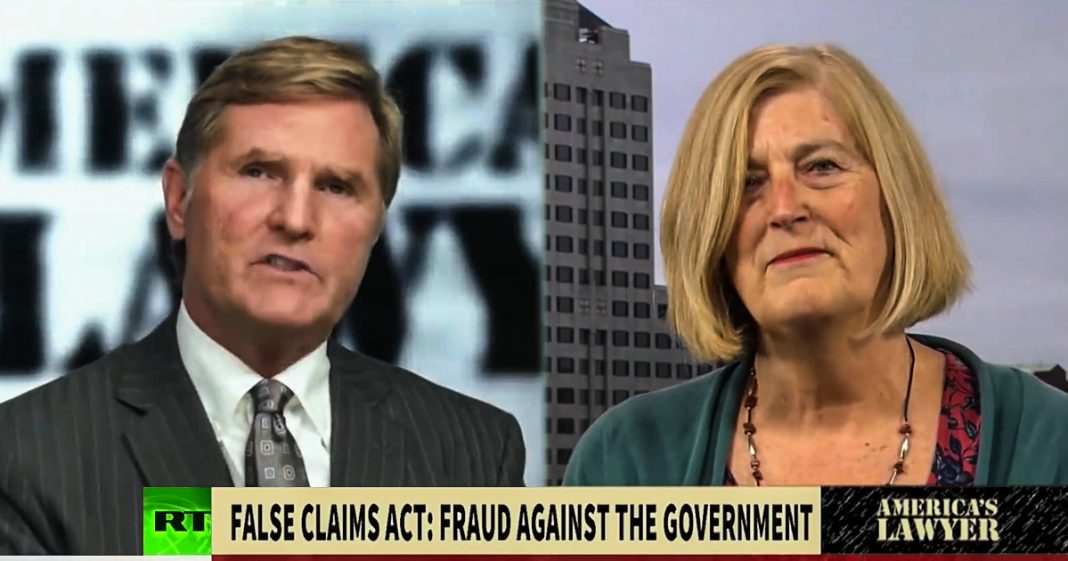 Via America’s Lawyer: Mike Papantonio is joined by Nola Cross, an Attorney who has obtained millions of dollars from corporations that have stolen from the government through the ‘False Claims Act,’ where private employees act as the whistleblower on Fraud against the Government.

Mike Papantonio: Since 1986, false claim to actions have recovered more than 56 billion dollars of taxpayer money by exposing and penalizing industry-wide fraud schemes, and by incentivizing whistleblowers, the government has recovered billions that otherwise would’ve been lost to fraud. Last year alone, whistleblowers who filed lawsuits on behalf of the government reported recoveries of more than 3.7 billion dollars the federal and state has been able to discover, fraud, not because of agency oversight, but fraud because of government audits. But through those efforts, a private whistleblower using the False Claims Act usually succeeds. Over 80% of the cases brought under the federal False Claims Act are initiated by whistleblowers, and an even larger percentage of the funds recovered can be ascribed to whistleblower actions.

Joining me to talk about this in more detail is Attorney Nola Cross, who’s obtained multimillion-dollar recoveries in Medicare fraud. Nola, it seems in a large part that the American system of Healthcare and other government contracting is all about the common fraud within those industries. That’s the way it’s looking right now. Ever since, we see the onset of the hospital corporation. There’s no longer doctor and doctor-run hospitals. We see this new thing, the corporate-owned health industry. Isn’t that part of the problem here?

Mike Papantonio: Well, we know who could be a whistleblower. I mean, anybody can be a whistleblower if they have inside information that is unique, that nobody else knows about, that they’ve discovered. The part of this story I’d like you to talk about a little bit is how so often the whistleblower is victimized by the system. I remember during the Obama Administration, his proclamation was, “We’re gonna really treat whistleblowers well. If a whistleblower does something wrong, we’re gonna protect that whistleblower.” Nothing is farther from the truth, in my experience watching these cases. How about you?

Nola Cross: I agree with you completely, and that’s why there are so few whistleblowers in comparison to the amount of fraud. If people were … Money isn’t the only incentive. There is an opportunity sometimes to prevail, and sometimes to get a whistleblower relator share under the False Claims Act, but oftentimes, people are very afraid of being stigmatized, of being blackballed in their industry, of never being able to work again in the healthcare industry or the military industry or procurement industry, or whatever area of fraud that we’re talking about. So, that’s a big disincentive. There’s also a lot of retaliation that’s immediate against any … Usually it’s an employee, any employee who is attempting to stop false claims in the making, and the statute’s pretty strong on that, but the statute can take many, many years, often a decade, and in the meantime, a lot of people are sidelined out of their careers.

Mike Papantonio: Yeah. Not only are they sidelined, but they’re victimized so many times. I mean, there’s times when people have to move across the country, they have to move out of the country, simply to protect themselves and their family. What interests me is this. Every state logically should have some form of False Claims Act. I mean, it benefits the state. What taxpayers don’t understand, they’ll hear the government is really bad, or a corporation is really bad, about trying to make the whistleblower look like they’ve done something wrong, but the truth is the taxpayer gets money back that the taxpayer would never see but for the effort of the whistleblower, and so you wonder, why wouldn’t every state benefit from having a whistleblower statute, and do most of the states allow for that? It seems like they should. What’s your take?

Nola Cross: That’s such a perfect question, especially when I’m speaking from Wisconsin, because Wisconsin is very unique. Most of the states, about 31, have what we call a mini key time statute, a mini False Claims Act statute, that allows for whistleblowers to report fraud and to recover some share in any recovery. In fact, Puerto Rico just passed a False Claims Act statute for Puerto Rico, which I’m sure will help them out quite a bit, because they have a lot of difficulties, some caused by the government, but some I’m sure are from contractors of the government.

Strangely, though, there’s one state, one state out of the entire 50 that actually repealed their mini False Claims Act statute, and that’s Wisconsin, and Governor Walker’s initiative in Wisconsin actually repeal the statute in 2015 so that there are no longer any provisions for whistleblowers to call the fraud against the state of Wisconsin, and which is usually Medicaid fraud. That’s what their statute is, Medicaid fraud statute. So, who does that help?

Mike Papantonio: Well, it’s highly political. I mean, corporate America has such influence on … Especially with buffoons like Scott Walker. I mean, the guy is absolutely a total buffoon, and he knew that the statute had allowed the state to actually collect money, taxpayers collect money from things like Medicaid fraud, Medicare fraud, all different types of fraud that was taking place in the state. Corporations got with the buffoon, and they convinced him that it was a bad idea, so of course, he did away with it. So, it’s a very political kind of process.

I finished a book. It was published several months ago. It’s called Law and Addiction. It was a fiction book, but it was actually based on a case that we handled in here, just to put into perspective how bad these cases can actually be. This was a case where a gun sight on a pistols and rifle gun sight was called a holographic gun sight, and it was so defective that at 50 yards it would be off two degrees. You can imagine what that does to somebody taking a name, and people were killed because of it. Soldiers lost their lives because of it. Police officers lost their lives.

When the whistleblower brought the case and tried to say to the government, “Look. This is bad. This is what’s happening,” that whistleblower was actually victimized, even though that sight was used by police departments, it was used by the military, but the political influence and the political impact was so strong that it actually interrupted the process of actually getting the money back because of that fraudulent activity. Well, actually, it was a piece of junk. It was a completely useless gun sight. But you see these cases often, don’t you? I mean, you see things that bad quite often in your practice, don’t you?

Nola Cross: Every day. Every day. It’s so disgusting now. You’re talking about the 56 billion that’s been collected since the incentivized relator share came into play in a different format in 1986, and for fiscal year ’17, the government has actually recovered 3.7 billion, and over that 3.7 billion, 3.4 of that billion, 3.4 billion of the 3.7 billion was only recovered because a whistleblower brought the lawsuit under the False Claims Act, but the types of cases that are brought are so disgusting, and every time you read one, it’s like you gotta take a shower afterwards. It’s like, who thought of this fraud scheme?

We had a recovery last year, in fiscal year ’17, which was pharmaceutical fraud. In that case, each pharmaceutical company has the ability, and usually does, purchase the prescription history of every doctor on a weekly or sometimes a daily basis, so they know how many pills of whatever it is this pharmacy company is pumping out, this doctor is prescribing, and then they want to have the doctors in their so-called speaker program so they can pay them some money, but then they’re monitoring it, and if they don’t prescribe enough, they may be dropped out of their speaker program. Those were allegations that we made in the recovery in that case, although the allegations were not admitted-

Nola Cross: … the recovery was 38 million, 38 million. Yeah, kickback is what that’s called, and the anti-kickback statute is incorporated, actually, by reference in the False Claims Act statute. But the types of disgusting … It’s so bad, and patient harm, and the kinds of … Just absolutely no concern whatsoever for patients, or for the military and military fraud, and the kind of patient with the kind of product parts, and military parts fraud. It’s so dangerous.

Mike Papantonio: Nola Cross, thank you for joining us. Keep up your good work.

Nola Cross: Thank you very much.