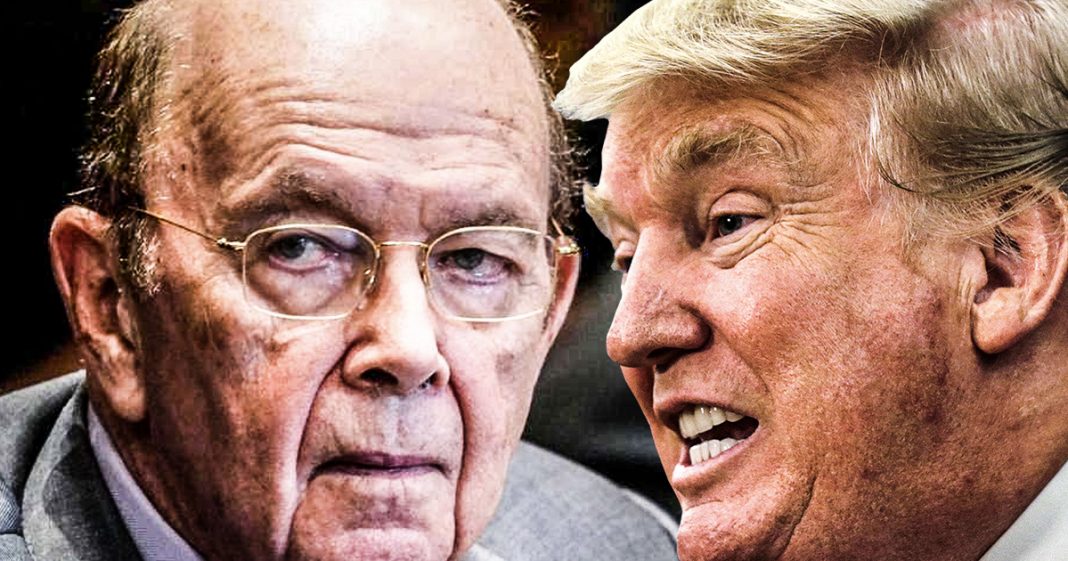 Wilbur Ross, Donald Trump’s Commerce Secretary, has been accused in a new complaint of violating ethics laws by using his position in the administration to further enrich himself. Specifically, Ross has refused to divest from his financial holdings that are impacted by the decisions both he and the President make on a daily basis, in spite Ross promising to do so. This leaves him ripe for law enforcement to take action, as Ring of Fire’s Farron Cousins explains.

Wilbur Ross, the Secretary of Commerce for the United States right now, has pretty much flown under the radar since he got his job. You know, we’ve had the scandals of Scott Pruitt, of Ben Carson, of Betsy DeVos, Ryan Zinke, but Wilbur Ross has really managed to just kind of go unscathed. Nobody’s paying attention what the commerce secretary is doing. Most people don’t even necessarily understand what the commerce secretary does.

But, luckily, the Campaign Legal Center has been paying very close attention to Wilbur Ross, and they filed a complaint this week alleging that Wilbur Ross has been illegally using his office to enrich himself ever since he became the commerce secretary.

Here’s the thing. Wilbur Ross was already a billionaire before he took this position as the secretary of commerce. A billionaire. And he’s still, according to this complaint and the evidence they lay out is pretty straight forward, using his position to make himself even wealthier. According to the complaint, Wilbur Ross is doing this because he has not divested from his many, many, many financial holdings and investments since he became secretary of commerce. You’re supposed to do that. If you do not do that, that is against the law. Ross promised he would, and yet it’s still appears that he is holding onto those and he’s very involved in his own personal finances.

The Campaign Legal Center says they know this because he continuously since becoming commerce secretary has been shorting his own stocks, selling them off super quick below value before he loses more money. He’s frequently done that when he knows news is coming out that’s going to affect those stocks and drive the prices down even further. They have several different incidents in their complaint where they’re able to show that this is what Wilbur Ross did. That’s illegal. That could also be basically prosecuted as insider trading, just like Chris Collins got popped with last week.

Here we have the Secretary of Commerce, the guy who knows everything about trade, about financials happening here in the United States, products that are up, products that are down, tariffs that are coming, he’s been a huge supporter of Trump’s tariffs by the way, and using that information, allegedly, to make sure that his stocks, his financial holdings, do not lose any money. That is, in case you’re wondering, 100% illegal. But, also, that is what we have come to expect from this cabinet of corruption that we currently have in Washington, D.C.

Tom Price, from Health and Human Services, along with Scott Pruitt, from the EPA, have already been forced to resign their positions with this administration due to the massive amount of corruption that they have. There’s already investigations currently going on into Ben Carson and Ryan Zinke. Now this complaint against Wilbur Ross and the ongoing new stories coming out about Betsy DeVos deregulating for-profit colleges because she’ll financially benefit from that, there is no one in this entire administration that is clean right now. They all have ties, almost all of them have ties to independent businesses that they are enriching through their work. Wilbur Ross, so far by flying under the radar, has managed to get away with a lot of dirty deeds. But, again, luckily we’ve got groups like the Campaign Legal Center out there working to make sure that people like Ross are held accountable if they’re breaking the law.

Winning the WAR on Opioids