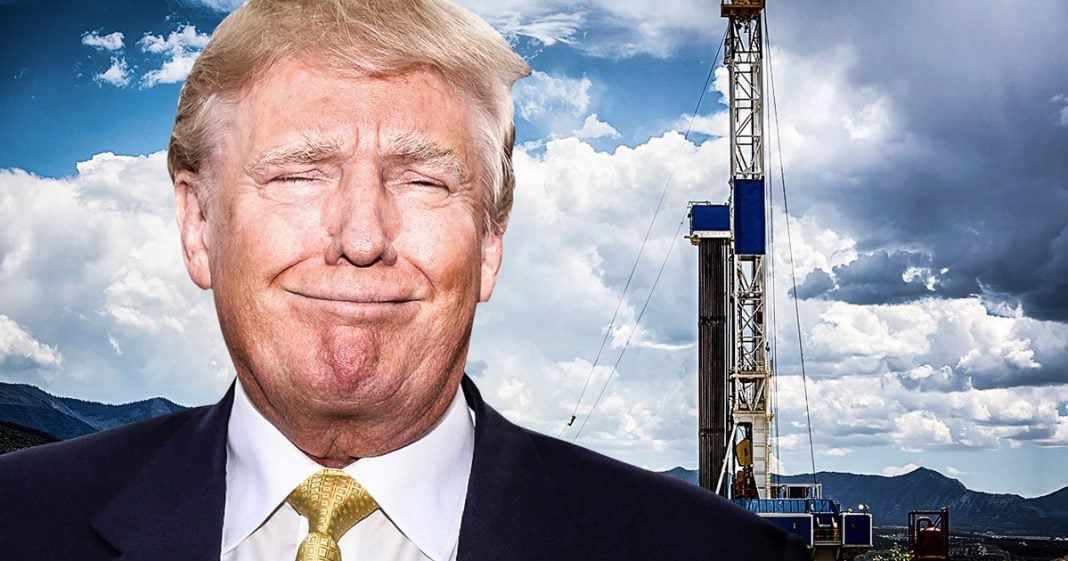 During a recent stump speech in New York, Donald Trump told a crowd that the reason taxes are so high in New York is because the state no longer allows fracking. If they open up their land for exploitation by the natural gas industry, they may all save a few dollars each year. Not only is this not true, but even if it were, the benefits of banning fracking far outweigh the costs, as Ring of Fire’s Farron Cousins explains.

Donald Trump took a trip to New York recently, where he was doing a stump speech for Republican Representative Claudia Tenney. And he kind of went off on a tangent, as he’s known to do, where he started talking about the high taxes in the State of New York. And that’s true, the taxes in New York are higher than most other areas in this country, on of the highest in the country. He’s correct about that. But then he kind of said that if they would just allow fracking, which Governor Cuomo had banned back in 2015, if they would let the frackers come in, they would probably be paying 0% in taxes in the State of New York.

That is what the current sitting President of the United States told New Yorkers during a stump speech for Claudia Tenney. If we would just let the frackers come in, pull that natural gas out of the ground at the expense of your groundwater, your air, and possibly even cause a few earthquakes, just deal with that crap. But if we let the frackers come in, you guys may not be paying any taxes, right? Yeah, okay, first of all, there’s no truth to that statement whatsoever. There’s fracking all over this country. There’s oil drilling. Guess what, Trump, those places still pay taxes.

The coal miners in West Virginia, they still have taxes. There is no correlation whatsoever in this country between areas that have fossil fuel extraction and the tax rate that they pay. That’s not how that works, dumb ass. But here’s the thing. I want to read you the actual quotes from his speech. And I have to skip about five minutes of it, because he goes off on this most bizarre tangent you’ve ever heard. Here it is. “If they would have allowed a little bit of fracking and taking some of the richness out of the land, by the way of it being sucked away by other states, you know, they don’t have state lines underground. You know that that means. And all of a sudden, someday you’re not going to have that underground maybe so much. And it’s a shame, because you could’ve had no taxes. You could’ve had the lowest taxes instead of the highest taxes. And it’s very sad to see what’s happened in New York.”

All right. Obviously, most of those weren’t even complete thoughts or sentences. But that’s how this President’s brain works. But what he’s really doing, we drill down to the heart of it, drill past the bad grammar here. He’s shilling for the fossil fuel industry. It’s what he does on a regular basis. It’s what most Republicans do on a regular basis. And it’s what the Democrats have said, “Hey, we want to do it too, just start giving us a little more money.”

Fracking is one of the dirtiest forms of energy extraction here in the United States during the lifetime of the fracked gas. Between the extraction and the chemicals injected underground, between the burning of it, which increases emissions, the transport of it, the cleaning of it, yes, over its lifetime, it is actually one of the dirtiest forms of energy available. And Donald Trump goes out there to shill for the frackers. Lies to the citizens, saying, “You might be paying zero taxes if we let them come in,” because other states are apparently, building these massive drills that are coming through New York under the state lines, as he tells us, and sucking it all up. And eventually, New York’s going to drill down there, and there’s gonna be nothing there. It’s going to be empty, hollow space.

That is literally, what he told people in New York, just so that he could get them to support this industry that profits off of the destruction of the planet and poisoning of American citizens. It’s good to know where the President’s loyalties lie. It’s just very sad that it’s not with the public.