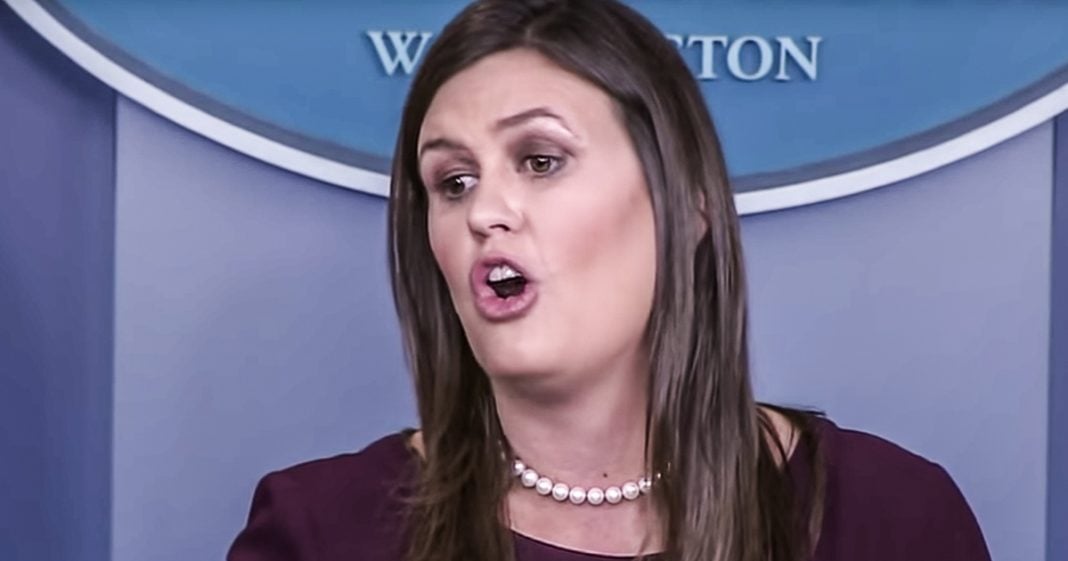 Sarah Huckabee Sanders had a rough time during Tuesday’s White House press briefing having to field questions about the claims being made by Omarosa. But it was her lack of a denial that the n-word tape exists that caught everyone by surprise. If they’d listened closer, they would have found even more in her statement to be appalled at, as Ring of Fire’s Farron Cousins explains.

Sarah Huckabee-Sanders had a very rough Tuesday at the White House press briefing, because obviously everybody in that room wanted to know whether or not a tape existed of Donald Trump saying the N-word as Omarosa Manigault-Newman has claimed.

Well, Sarah Huckabee-Sanders admitted that, “Hey, I’ve never heard him use that phrase or anything like it, but I haven’t been in every room.” Everybody immediately jumps on that saying, “Okay, that’s not an outright denial,” which is actually nice to hear from her. She didn’t flat-out lie and say, “No, he’s never said it. He’s a complete angel,” which is what we would expect from her. But she didn’t deny that a tape could, possibly exist.

Now we know now other people who’ve been involved with The Celebrity Apprentice and The Apprentice in general have also said, “Yeah, Donald Trump made very racially-charged statements that made us uncomfortable,” specifically magician Penn Jillette said that recently to kind of confirm what Omarosa is saying here. But here’s the thing, that wasn’t even the biggest part of the press briefing on Tuesday. She actually said something that’s a little more serious than her non-denial there, and here it is. Take a look.

What do you say to critics who see his attacks on Omarosa as part of a pattern of insulting prominent African-Americans? People he’s criticized recently include Don Lemon, Maxine Waters. He’s claimed that football players protesting racial injustice don’t know what they’re protesting.

Look. This has absolutely nothing to do with race and everything to do with the President calling out someone’s lack of integrity. The idea that you would only point a few of the things that the President has said negative about people that are minorities, the fact is the President’s an equal opportunity person that calls things like he sees it. He always fights fire with fire, and he certainly doesn’t hold back on doing that across the board.

Sarah, and then have you signed and NDA?

I’m not going to get into the back and forth on who has signed an NDA.

The President is an equal opportunity hater, right? I mean that’s what she’s telling us right there in that clip. No, it’s not that he dislikes black people more. No, don’t worry, this man hates everybody, and will go after anyone equally because he just obviously has to fight back. Yeah, that’s not how this works.

Look, I remember when I was a teenager a friend of mine gave me a Zippo lighter that said: “I don’t discriminate, I hate everyone.” I thought it was funny because I was a teenager and super immature. Yet, that was Sarah Huckabee-Sanders’ defense of the President calling Omarosa a “crazed, crying lowlife dog.” Oh, he just hates everybody. It’s not just black people, even though most of his public attacks are against black people. No, no. No, he hates everybody, so don’t worry. He’s just a hate-filled horrible individual, so can we please move onto the next question here, please?

This man is unfit to be President of the United States. I mean as most of us have been saying for several years at this point. But for Sarah Huckabee-Sanders to admit that he is just a hate-filled rage machine that’s going to go after anyone who ever dare say something not positive about him, shows what a thin-skinned weak individual Donald Trump truly is. Those traits alone should be disqualifying for the office of the presidency because when you’re up there dealing with other world leaders, you kind of need to have a bit of a backbone. You need to be able to handle criticism. Clearly, that person isn’t Donald Trump.