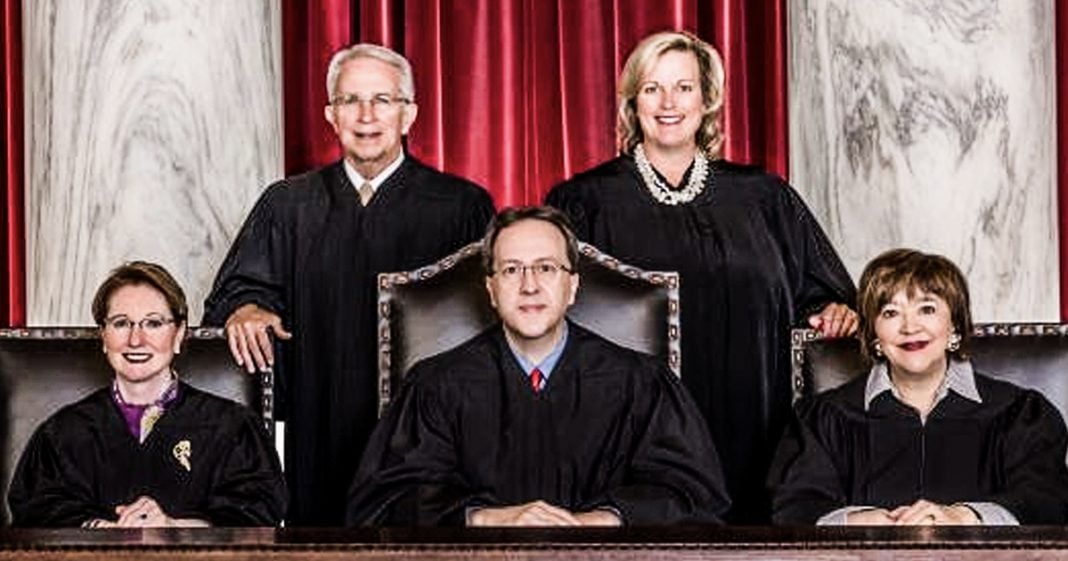 The state Supreme Court of West Virginia is facing impeachment – the ENTIRE court. The state legislature this week approved the articles of impeachment after a lengthy investigation revealed a major spending scandal among the justices, which included them spending $34,000 on a couch, in addition to other unnecessary renovations of their offices. Ring of Fire’s Farron Cousins explains what this could mean for the future of that court system.

Now, this is significant. This is every single member on the West Virginia State Supreme Court of Appeals. This is a massive move. And what started all this is actually a spending scandal, that kind of embroiled everyone there on the Supreme Court. One of the things that they spent money on, they spent $34,000 on a couch. They also spend hundreds of thousands of dollars renovating their individual offices, using public vehicles for private travel. Wracking up all kinds of bills that they shouldn’t be able to wrack up, which is why they’re being impeached.

And honestly, that’s a good move. The makeup of the court as it stands right now, because one Justice has already resigned, is that there’s two Democrats, one Republican, and one Republican leaning independent. So it’s pretty much split two and two, the Chief Justice is a Democrat.

But here’s the thing, the solid Republican on that court is actually facing additional charges, could be look at actual criminal prosecution, not just impeachment, because he, and here it is, he faces federal prosecution for fraud, witness tampering, and false statements. And he’s also accused of using a state contract in a moving company to steal priceless office furniture from state buildings for personal use, and billing state accounts for his book signing tour, which actually happened to be a book about government corruption in the state of West Virginia.

And here’s the sickening part to me though. In addition to the spending scandals, the witness tampering, the fraud, the false statements, all of that, is that there’s actually some Democrats out here who are furious that this has happened. The Daily Coast is mad because they’re saying, “Oh, this is just the Republicans and the legislature, they’re trying to take back over the court. You could tell that from the timing of this.”

An investigation happened, it founds massive wrongdoing amongst all members of the Supreme Court, not just the Democrats, but the Republicans too. Everybody was engaging in unethical, potentially illegal behavior. So, I’m sorry that that angers you, that you think this is a Republican power grab, but regardless of political party, corruption needs to be rooted out of all levels of government.

I mean I’m tired of hearing Democrats, “You can’t say this, because that’s a Democrat and we need them.” Oh, we can’t lose this Supreme Court that goes right 90% of the time anyway, because they’re Democrats. Listen, corruption knows no party, right? If somebody is corrupt as hell, and doing things that are potentially illegal, it doesn’t matter if there’s a D, and R, and I, a G, or an L next to their name, they need to go.

That’s how this government, that’s how this country is supposed to work. So, don’t whine to me that an already right leaning state Supreme Court that rules with corporations and fossil fuel interests most of the time could be remade into being even more conservative. If you’re already conservative, you’re not going to get more conservative than that when it’s a black and white issue such as the law.

So stop whining about it, and start cheering for the fact that hey, somebody in this country finally did something decent to stamp out corruption.