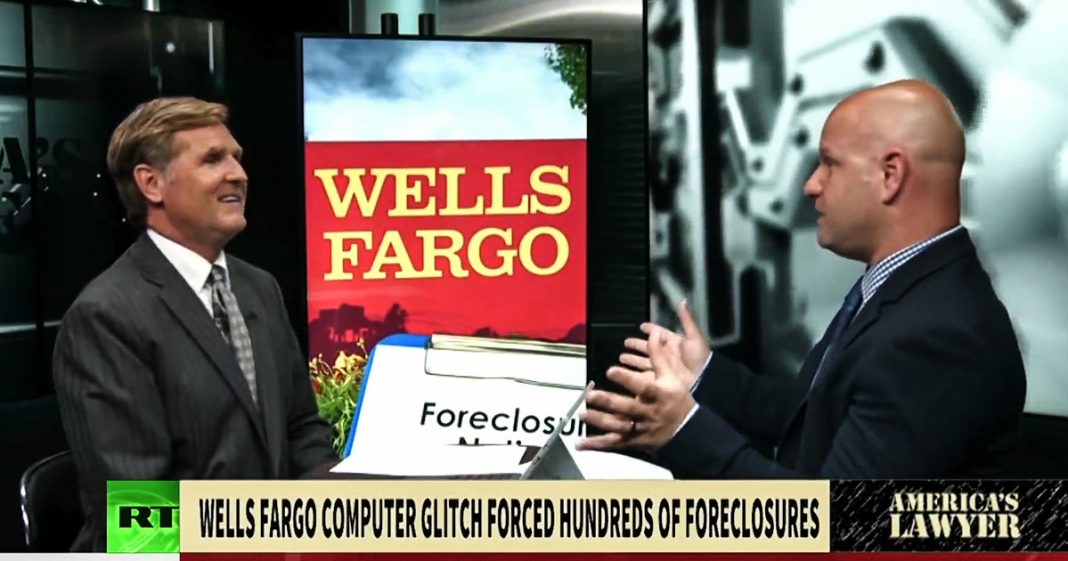 Via America’s Lawyer: Mike Papantonio and Farron Cousins talk about how a Wells Fargo computer glitch caused error foreclosures for hundreds of people.

Mike Papantonio: Wells Fargo claims that a computer glitch was responsible for more than 400 of their customers being kicked out of their homes due to foreclosures. Well, should we really trust the company that has this remarkably scandalous history? I mean, look, I go toe to toe with corporations worldwide all the time, I mean, bad corporations. When you take a look at the background of Wells Fargo, give me an intro. I know you’ve done stories on it. I have, too. Just give us a quick rundown on what kind of company we’re dealing with here with Wells Fargo.

Farron Cousins: Here’s my short list. On mortgage abuses, they have been fined $5.5 billion over the last, I think, 18 years. Banking violations, $2.9 billion. Securities abuses, $1.5 billion. False claims acts, $1.2 billion. Consumer protection violations, half a billion dollars. Wage hour violations, $205 million. This list is endless. You and I earlier this morning, actually, were looking through that massive list. It’s hard to choose what’s the worst crime that Wells Fargo has done here. When they come out and say, “We foreclosed on 400-”

Mike Papantonio: Well, by the way, that’s a short list.

Mike Papantonio: The actual list is five times that size.

Farron Cousins: Right. When they come out and say, “Yeah, we foreclosed on 400 people accidentally because of a computer glitch,” you look through that list of all the times they lied, they got busted for fraud, all the whistle blowers that have come out of there, there was no computer glitch whatsoever.

Mike Papantonio: Let me drill down on this a little bit, okay? Here it is. They targeted basically low-income folks who have worked very hard to stay in their home. That’s the first part of it. In other words, they knew what their target was. They went after people that wanted an extension, they wanted a modification on the loan. They should have gotten the modification on the loan across the board, and they didn’t do that so they could foreclose on the home. Now, here’s where it really gets interesting.

Farron Cousins: They put aside a fund to help these 400 people.

Farron Cousins: Yeah, $8 million, so that’s assuming that every home they foreclosed on was only worth $20,000, which that is not even close to being the case. They had pocketed tons of money off the foreclosures. They’re offering this small pittance to these people, but you nailed it there. A glitch is going to affect anyone who is applying for any kind of mortgage restructuring, whether you make $500,000 a year or whether you make $25,000 a year.