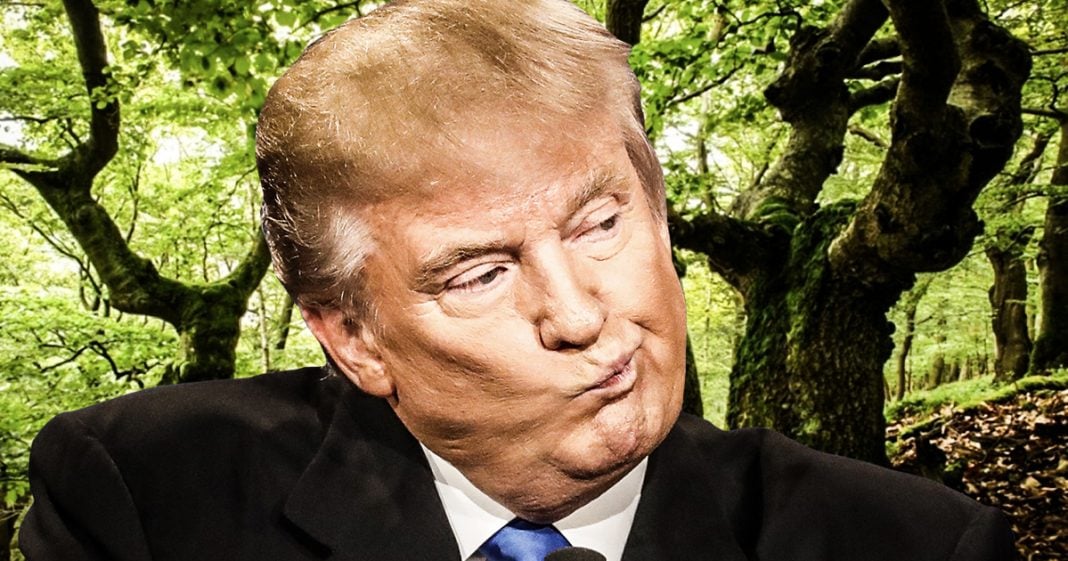 Interior Secretary Ryan Zinke toured parts of California that have been ravaged by the worst wildfire in the state’s history, and he is now claiming that the problem is caused by “too many tress.” The administration is using the fire as an excuse to open up once-forbidden areas to the logging industry, a move that will do absolutely nothing to prevent fires from happening in the future. Ring of Fire’s Farron Cousins discusses this.

On Sunday, Ryan Zinke, the Secretary of the Interior, toured several areas of California that have been ravaged by the wildfire, and he came to the conclusion that if we want to stop wildfires, we’ve got to get rid of the trees. Zinke basically said in a statement after touring these areas that there’s just too darn many trees out there and that’s why everything is burning. If there’s nothing to burn, you can’t exactly have a fire now, can you? While it’s hard to argue with Zinke’s logic there, experts have already argued with his logic and proven his point to be completely false.

But before we get into those arguments about why what Zinke is saying is completely false, let’s take a look at his actual statement here. Here is what he said. “It doesn’t matter whether you believe or don’t believe in climate change.” Actually it does. “What is important is we manage our forests.”

Furthermore, we do need to manage our forests. We absolutely do. But your solution is to let loggers come in, take the healthy, good trees out of the forests and leave all of the dead trees, which by estimates there’s about a hundred million dead trees lying in California forests that are rotting, that are drying, that are ripe for spreading fires. You want to leave that stuff there. You want to leave all the underbrush and let loggers come in and take the good trees, the ones that don’t easily catch on fire. That’s your plan. That’s the administration’s plan because right now the Interior Department of which Ryan Zinke is the head of is actually working on a proposal that would allow logging companies to come into areas where they had once been forbidden and take out the healthy trees.

Furthermore, the Interior Department does have a budget every year for forest management and that is the money they’re supposed to be using to go out there, clear out all of this underbrush and the dead trees because that’s what catches fire and spreads the fire, but they actually can’t spend the money on that because they’re spending all of their money on fighting the wildfires that happen.

There is a cycle happening right now with the federal government. You underfund an agency, give them only so much money that they’re supposed to do their job with. But because there’s so little money, they can’t do their job which causes catastrophe which causes them to spend their entire budget to fight the catastrophe so once again there’s no money to do their job and so on and so forth. That’s why this cycle perpetuates itself every single year.

Our government is being run by morons. Our government is typically on any given day, in any given year being run by complete morons. But they’re morons with an agenda and that agenda is to use whatever calamity, whatever catastrophe that you can to push for some kind of privatization. The Interior Department can’t handle our forests, so let’s hand it over to the logging companies, so they can cut down the good trees and make a good profit off of it because those corporations will eventually come back and fund our party again. It happens on the left, and it happens on the right.

Just so happens right now that it’s happening on the right because they’re the ones in charge. But that’s what this is all about. That’s why Donald Trump is out there saying, “Oh, the environmental laws are so bad, they’re not letting us get water to fight the fires.” Even though in a forest fire, it’s actually not water that is the primary tool used to fight it. Not to mention the fact that everybody out in California, including the firefighters and government officials have said, “No, there’s plenty of water. That’s not the problem. The problem is that we can’t stop it from spreading because of the droughts which were worsened by climate change.” But this administration and too few people in the federal government are willing to admit that because admitting that might put the fossil fuel companies in a bad position and fossil fuel companies are funding both parties, and the loggers, they just want to go in there and take those healthy trees and strip them down to make them into wood before they get burned up, too.

The problem isn’t the number of trees that are growing in the forests. The problem is that we have a government being run by complete idiots.