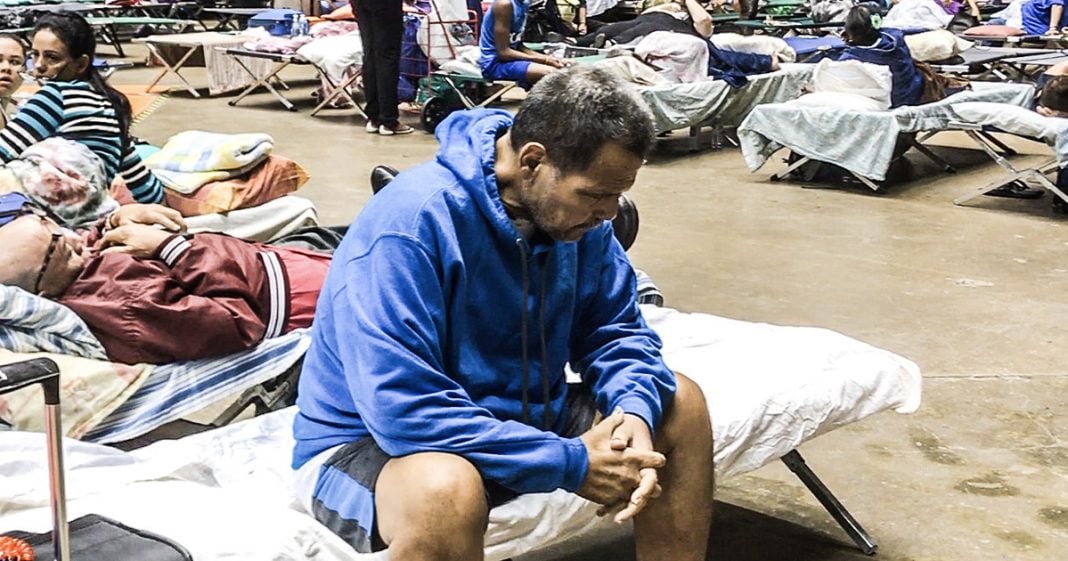 According to an explosive new report by The New York Times, countless supplies that had been donated towards Hurricane Maria victims in Puerto Rico sat rotting in warehouses for months without ever being delivered to people in need. The island is still suffering today, and not one corporate-owned media outlet is telling the story about what’s actually happening in Puerto Rico. Ring of Fire’s Farron Cousins discusses this.

According to an explosive new report by the New York Times, shipping containers filled with donated supplies that were supposed to go to hurricane Maria victims in Puerto Rico have been sitting in a parking lot for a year now infested with rats, covered in rat and lizard droppings, with nobody to distribute these goods to the people who are still in need. These containers filled with all of these donated goods that came from citizens and private charities here in the United States, been sitting there for a year. During most of that time, a good portion of people on that island did not have electricity. They did not have running water. They desperately needed these supplies which included clothing, nonperishable food items, baby food. And yet rather than distributing it, giving it to people in need, it sat there and rotted in a parking lot.

Here’s what happened according to the New York Times. Before they left the island, the US National Guard was in charge of distributing aid and donated items to people on the island of Puerto Rico. They decided that their time was up so they moved all of these containers over to a parking lot, which was actually in the state elections office parking lot there in Puerto Rico. The National Guard left, they never told anybody how to distribute these, where to distribute them, or that they could distribute them. So people at the state elections office began calling the governor asking questions about how do we distribute this, “We have these things here. We don’t know what to do with them but we need to get them out”. They never got a response. They could never get back in touch with the National Guard to get a response about how to do this. So these things just sat there.

And to be honest, this entire story gives us a prime example as to why Puerto Rico should be named the 51st state of the United States. Rather than being a territory, it is time to fully incorporate Puerto Rico and give them the statehood that they have been trying to achieve for decades now. If they were brought closer under the umbrella of the US federal government, things like this likely wouldn’t happen. We can’t say they definitely wouldn’t happen, but there would be a much more defined and a clear chain of command here where they could prevent supplies like this from just rotting in a parking lot and could’ve actually distributed them to people in need.

According to official estimates, 1,427 people died in Puerto Rico after the storm hit. Now that’s the official number. We know that the independent studies have shown that far more people than that actually died. But these are people who died after the storm hit, people who died from drinking contaminated water that they shouldn’t have been drinking, people who needed medical care but couldn’t get it because there wasn’t enough to go around, starvation, exposure, dehydration, other diseases that happen when you have no running water or no electricity or anything like that. These supplies could have saved lives. But because of the incompetence of the government there, because of the incompetence of the government here … And to be honest, I have to take that back because the government of Puerto Rico, the governor, was trying to deal with a massive catastrophe and not getting help from anyone. So, yeah, that plate was probably a little too full to figure out what to do with these shipping containers when you have people dying in the street every day. So it’s difficult to even fault that governor for this.

But, again, this is a massive catastrophe that took place under the watch of Donald Trump. His response to it was horrible. FEMA’s response was horrible. The National Guard’s response, as we now know, was absolutely atrocious. And more people died because of how incompetent our federal government is.