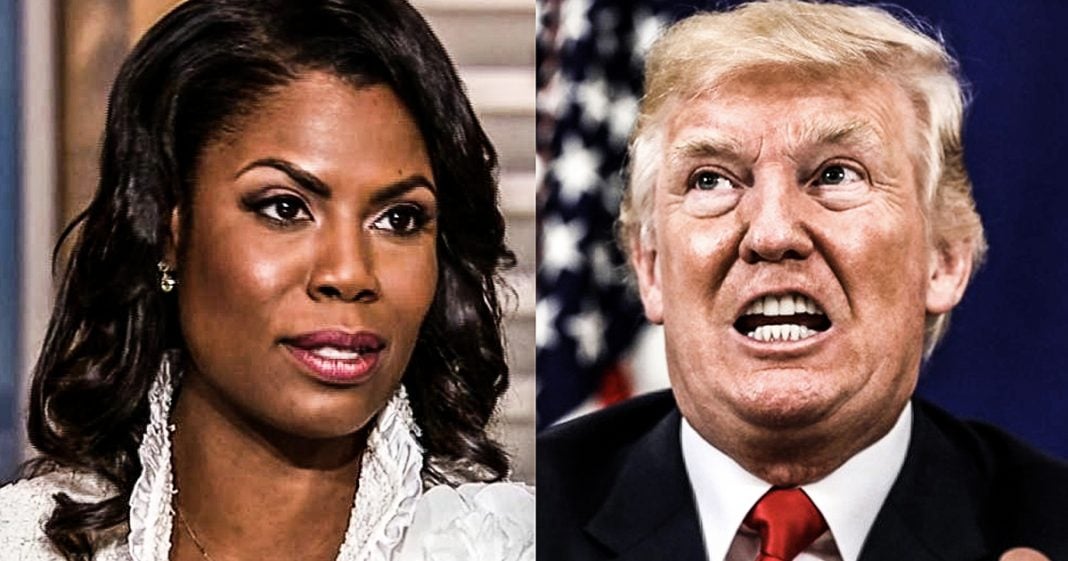 Former Trump advisor / The Apprentice candidate Omarosa Manigault has a new tell-all book out where she makes some pretty serious accusations about Donald Trump. If true, these revelations paint a much darker picture of the evil that lives within Trump, but that is a big “if”. There’s no question that Trump is a scumbag, but just how trustworthy is Omarosa? Ring of Fire’s Farron Cousins discusses this.

So by now, I’m sure that everybody knows that Omarosa Manigault has a new book out, and in this book, she makes some pretty serious claims about who Donald Trump actually is as a human being. There’s all kinds of things. First and foremost, the fact that he used the n-word, that he was trying to start a race war, that he wanted to be sworn in on The Art of the Deal. All kinds of things like that that actually paint a really clear picture of Donald Trump’s mental state as well as his personal beliefs about the color of peoples’ skin here in the United States.

She also claims to have recordings of many of these conversations, and so far, actually two recordings have already been released. She does have a recording that she managed to make in the Situation Room in the White House of John Kelly firing her. Now you’re not supposed to have recording devices in there, yet somehow, this woman, with no government experience whatsoever, was able to get one in there, sneak it past John Kelly as he’s firing here, and then she later recorded the phone call the next day that Donald Trump made to her to say that he was really sad that she was fired, he didn’t know anything about it. That tape was released this morning.

So we know she’s got tapes. The question is, do the tapes that have not been released confirm any of the actual claims that she made in the book? Because right now, those two don’t square up. Yes, she has tapes, but it’s not about any of the salacious claims that she’s making in this book. And that’s what we have to be careful about. I know everybody is really excited to think that we may have a few more pieces of the puzzle to show what a disgusting character Donald Trump truly is, but we have to take a step back every now and then and consider the source.

Omarosa, for those of you who didn’t watch her time on The Apprentice, which I’m ashamed to admit, I actually did. She is a liar, she is a manipulator, and she is very conniving. And I see no difference in what she is doing today, trying to sell more copies of her book, than what she did on that first season there on The Apprentice. This is who she’s always been. That’s actually one of the reasons Donald Trump was drawn to her. She’s just like him and will do whatever it takes, say whatever it takes, whether it’s true or not, to make herself a little bit more money or to advance her career, and that seems to be what is happening now.

Now she may release these tapes, and it may confirm every single thing that she has said in this book or any of the other claims that she has made in any of the publicity, hyping this book. But as of right now, I encourage everybody to take everything with a grain of salt. Nothing that she has claimed is going to actually bring Donald Trump down. It’s not going to really even tarnish his image among his supporters. It’s just for our amusement, and that’s how we need to look at it. It’s not going to end this administration, it’s not anything that’s going to get him impeached. It’s just going to further solidify in the brains of the people who already dislike him; you, me, most of us in this country, that he is a walking, talking piece of crap.

But as for the other claims that she made, wait for those tapes to come out. But there is something we should be concerned about, and a few people have already brought this up, and that is the fact that she was able to record these conversations with the president in the actual White House, because if she was able to do it, who else has been able to do this without the president’s knowledge? That is the part of the story that we should all kind of be focused on because that seems a little bit more important than somebody like Omarosa trying to sell a few more copies of her book. Who else managed to sneak a device into the White House and record what Donald Trump has to say? Maybe a foreign leader, maybe a US politician, maybe a business leader. Who knows? But if she was do it … if she was able to do it, excuse me, I think it’s pretty obvious that other people would have been able to do it as well. That’s what we need to be concerned about right now.