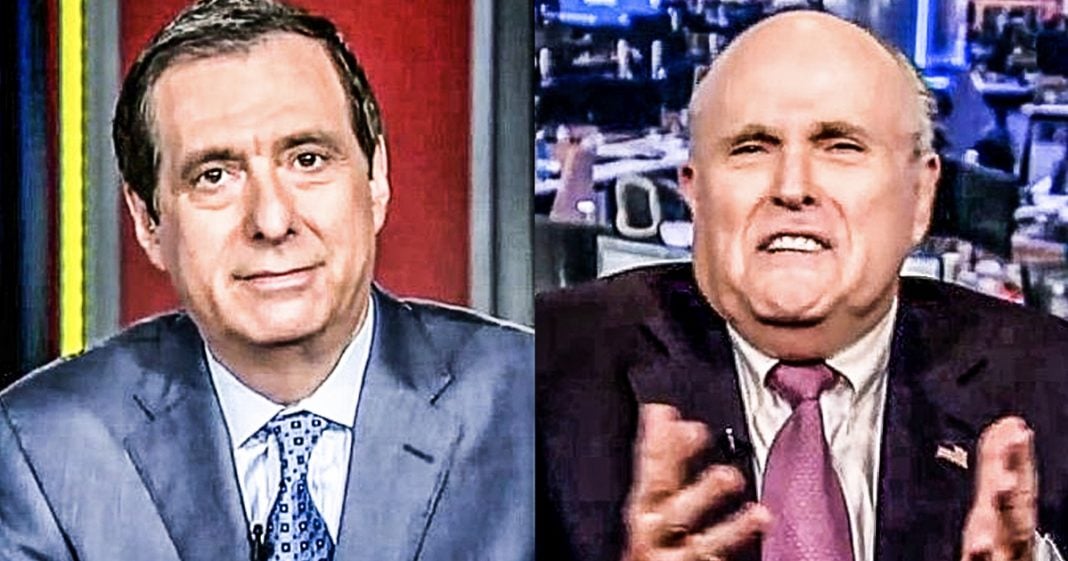 Rudy Giuliani has a habit of saying some crazy and outlandish things about during TV interviews about his client, Donald Trump, and those claims have sparked speculation among some current and former Republicans as to whether or not Giuliani is suffering from some kind of mental decline. This weekend, Fox host Howard Kurtz asked Giuliani, in the context of a comment made by Joe Scarborough, if these claims have any merit. Ring of Fire’s Farron Cousins discusses this.

During an interview this past weekend with Fox News host, Howard Kurtz, Trump attorney, Rudy Giuliani, actually addressed some of the claims that he’s not mentally well that have actually been made by other current and former conservatives. Take a look at this exchange and see how Rudy Giuliani immediately adapts his performance so that he doesn’t come off as crazy. Here it is.

Howard Kurtz:
Now, you get personally hammered a lot in your very public role here. And, particularly on MSNBC. So, for example, just to give you a chance to respond, Nicole Wallace, former Bush White House official said, ‘Oh, my God. Rudy needs to check his carbon monoxide monitors.’ And, Joe Scarborough, one time republican congressman said in while criticizing some of your comments, ‘His eyes are bulging while he’s talking and he looks disoriented.’ Do you feel disoriented, Mr. Mayor?

Rudy Guiliani:
Absolutely. I’m completely disoriented. I’m sure it sounds that way. Is there something wr- … I mean, doesn’t this give you an indication how we have, of what you cover, of how completely disoriented the press is and how out of control they are. Not only criticizing the President, but everybody around him. I don’t know, you can disagree with me. I’m hardly disoriented. I know where I am. I know who I am. I don’t even think it’s worth commenting except for the fact that aren’t they way out of control with journalists accusing you of some kind of mental illness?

Okay, again. Let’s start with the fact that Giuliani suddenly, yes, I’m totally disoriented. He changed his entire demeanor because he understands completely what Joe Scarborough was talking about that Howard Kurtz brought up. He knows exactly what he does that comes across as crazy.

But, more importantly, I don’t feel like Howard Kurtz was joking around with him there. That man was stone-faced absolutely asking him, do you feel disoriented? It wasn’t a joke. He wasn’t playing around. I feel like Howard Kurtz, in that particular clip, was legitimately trying to find out if there is something wrong with Rudy Giuliani. Now, maybe I’m wrong about that. Maybe Howard Kurtz just has a very dry sense of humor, but based on what we’ve seen from him over the past few years, I don’t think that’s the case at all.

Rudy Giuliani is trying to be all defensive now saying, look at what they do, they attack, they attack me, they attack Trump, the attack our mental well being because they’ve got nothing else. No, no, no. We attack your mental well being because you’re not the same human being that you were just few years ago. We can actually go back. I don’t know if you understand that the internet exists, but it does. We can go back and watch how you performed during interviews four years ago, ten years ago and compare them to the day, back to today, excuse me. You’re not the same person. Something has changed. Something is different. You … Every time you go out there and do an interview you say something stupid or crazy and on multiple different occasions you have actually implicated your client, Donald Trump, into further potentially criminal activity.

So, I think it’s well within reason to question whether or not you are disoriented or mentally even capable of being a lawyer any more. Because based on the interviews and other media appearances you’ve had for the last six month, I think anybody watching those knows that clearly something isn’t quite right in Rudy Giuliani’s brain.