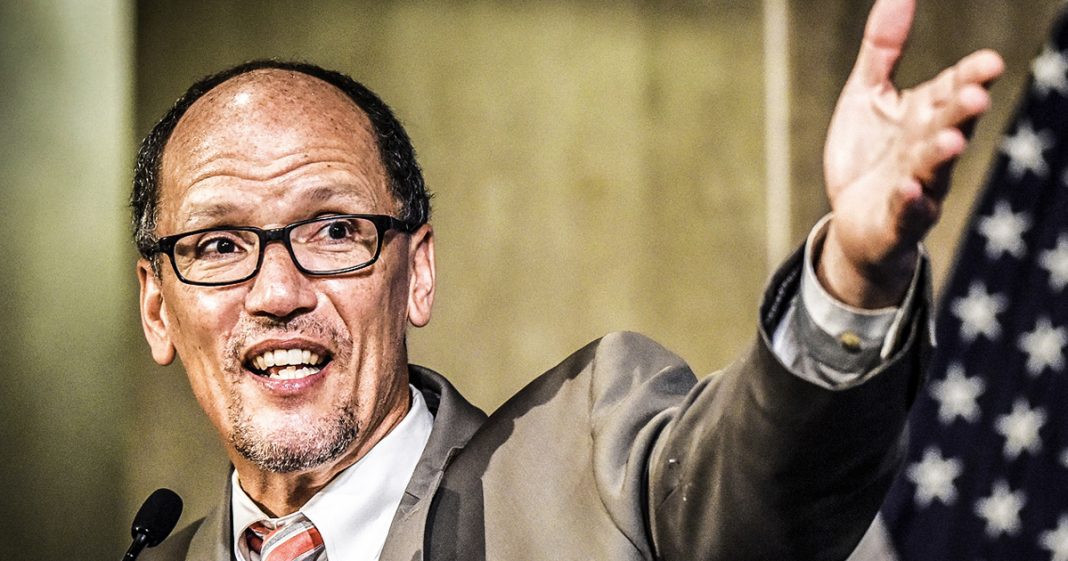 Just a few weeks after announcing that the Party would no longer be taking any money from fossil fuel companies, DNC chairman Tom Perez has reversed course and wants the Democratic Party to once again accept money from companies that profit off of the destruction of the planet. Ring of Fire’s Farron Cousins explains why this move shows that the DNC doesn’t actually care about their future or their reputation.

The DNC decided two months ago that they were no longer going to accept money from fossil fuel companies. This was a phenomenal move by the democratic party. You know, we’re not gonna take money from these corporations that are profiting off of the destruction of the planet. But like a smoker who just can’t seem to kick the habit, two months after making this decision, Tom Perez, the chairman of the democratic party this past Friday introduced a resolution to go ahead and start taking that fossil fuel money back again because they just can’t handle the withdrawal symptoms of it. And it overwhelmingly passed. So hey, once again the democratic party is taking money from fossil fuel companies that are absolutely decimating the planet.

So you had a good two month run there where you weren’t taking any of their money. But I guess now you saw hey, there’s midterms coming up, and there’s money to be made for the party, and I wanna get my hands on it, I don’t wanna leave anybody out. Now the official reasoning of Tom Perez and those establishments over at the DNC was that hey, we wanna just make sure that the employees of fossil fuel companies can still give to the democratic party. Because it wasn’t fair to exclude them from it, so we wanna make sure that these men and women who work there, they’re not part of the problem, it’s just their job, so they should still be able to give us money.

Yeah, here’s the thing. The original draft of the resolution that was passed banning the money, it actually still allowed the employees to give money. So not only are they lying about their reasoning for doing this, but they’re actually doing it. The democratic party as an establishment, as a thing, is getting closer and closer to becoming the republican party. And we saw that in 2016 when the democratic party decided to adopt their platform ahead of the election.

They refused to say that they support a ban on fracking, even though they understand that a good portion of this country, and a large majority of people within their party supported bans on fracking. It is incredibly dangerous, it is incredibly polluting, and it’s also been linked to an increase in the frequency of earthquakes throughout the United States. This party didn’t even have the courage to stand up and say we don’t even like that particular form of energy extraction. And now, as what they’re calling part of their all of the above energy approach, they’re once again taking money from the fossil fuel companies.

Here’s the thing, there’s no such thing as an all of the above energy approach, doesn’t work, doesn’t exist. No only country is saying, “Well let’s drill more. How ’bout we burn more coal? How ’bout we frack more? How ’bout we not invest in renewable energy?” Please understand this is a uniquely American thing right now. Europe, Asia, yeah they’re still consuming fossil fuels, but they’re at least attempting to switch over to renewables. Some countries have already exceeded the goals that they had set for themselves with the Paris Climate Accord. But here in the United States we have one party, the republicans that deny that climate change exists. And now we have another party that says, “Yes, it exists. Yes the fossil fuel companies are responsible or it. And yeah, we’re sure as hell gonna take their money because we’re a party of idiots.” It’s not a party of idiots, but at this point it is a party being run by idiots.

That is what Tom Perez is, that is what the higher ups at the DNC who voted to accept fossil fuel money are. And anyone who tells you otherwise, is trying to sell you something.