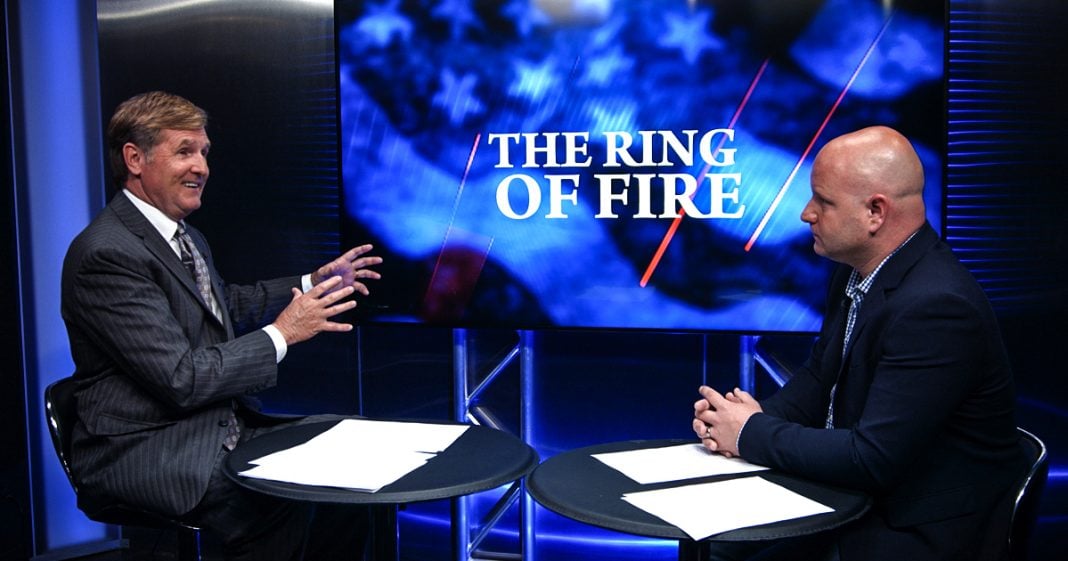 Wells Fargo claims that a computer glitch was responsible for more than 400 of their customers being kicked out of their homes due to foreclosure. Ring of Fire’s Mike Papantonio and Farron Cousins discuss this issue.

Mike Papantonio: Wells Fargo claims that a computer glitch was responsible for more than 400 of their customers being kicked out of their homes due to foreclosure. Now, interesting about this story. Obviously, you can’t trust Wells Fargo. The other thing is, just as you would expect, this was aimed at low-income, poverty-stricken people who have done a good job working their way out of poverty. Right? They’re in a home, they’re stabilized, everything is working fine. They should get what they call an extension which basically extends in a mortgage, helps them make it through bringing down the cost of the mortgage. And Wells Fargo targeted them. I mean, there’s no question. In my mind, they targeted these people and now they’re trying to blame it on a computer glitch.

Farron Cousins: Right. I mean, to me-

Mike Papantonio: What is your take on this?

Farron Cousins: I’ve read this story several times now. There is nothing in this story that speaks glitch. This sounds like this was how the program was written for Wells Fargo to use to identify and target these specific people. Because a glitch isn’t going to go after one specific sect. A glitch will affect every single person. This only went after such a small-

Mike Papantonio: Good point. In other words, if you talked to a computer analyst, they’ll say, “This is not a glitch. A glitch is systemic.” Right? A glitch is systemic. This is very isolated. And it just happens to be poor people who are foreclosed on that should not have been foreclosed on. Now, you put this list together. I love this list. Let me take a minute and read some of this stuff. Top 10 primary offense, the type, the penalties that have been hit for Wells Fargo. They’ve been caught doing this thing.

Farron Cousins: Five and a half billion.

Mike Papantonio: Five and a half billion dollars in mortgage abuses. You have here two … In other words, they were hit that … This occurred twice, is what you’re saying?

Mike Papantonio: In banking violations, two billion, almost three billion banking violations, different occurrences, 14 times. Toxic security abuses, one billion, 500 million dollars worth, occurred more than five times. False claims, occurrences where there was an amount in excess of one billion, two hundred million dollars in losses. The list goes on forever. We’re going to post this list. People actually need to see this list, because this is this much of the list. Okay, so let me tell you what I did today. I think you’re going to like this. I called my broker, who happens to be working with Wells Fargo as an … They have an independent agency which is an investment agency, separate and apart from Wells Fargo. I say, “You need to send an email to Wells Fargo, and you need to say that you’re getting ready to lose one of your biggest accounts because your criminal conduct.”

And my message to the broker was, “Look, there are no excuses here. Okay? Crime like this, this type of crime, flows from the top. You have to get rid of the people at the top. It’s like any organization, you hire people that are like you. So if you’re at the top and you’re kind of a little crooked, then everybody underneath you becomes crooked as well. So I don’t know where that’s going to go. I said, “Send the …” And he knows I’m serious. And he knows that it’s a substantial threat. So what is your take on this? I mean, what do people do? Do they just say, “I’m through with Wells Fargo. I don’t-”

Farron Cousins: They should. We saw the same thing … Bank of America was involved in a lot of criminal fines that they got, discrimination, funding fossil fuel companies. There was a big backlash. A lot of people left it. Bank of America didn’t necessarily change their ways. But not enough people left it. Not enough people stood up and said, “You know what? You’re right. This is a criminal enterprise.” They only seem to do it when you have an advertiser that seems to support Sean Hannity or somebody that you don’t like politically. Well, these are criminal activities. I mean, the grand total here is well over 10 billion dollars in the last few years

Mike Papantonio: And that’s just a part of it.

Farron Cousins: Over 10 billion in a few years that they have ripped off from American consumers and the federal government. I think that outweighs any kind of politics, left, right, or center.

Mike Papantonio: But everybody can do something. They can do the same thing that I did this morning when I call my broker and I say, “You know, I love you man. We’ve been with you a long time. Our firm … We’ve done a lot of business but this email needs to go out, and I need to see a response that somebody’s saying ‘Somebody at the top needs to be fired.'” And the next question is, does there have to be a serious perp walk that takes place, where the Department of Justice finally does something meaningful, finally throws some guys that are dressed up in Armani suits in prison? I mean, that’s the only thing that’s going to happen to change anything.

Farron Cousins: And I hate to say that. The last time we had a Justice Department that did that was actually Reagan with the S&L. 600!

Mike Papantonio: 800! 800 bankers under Reagan went to jail. We haven’t seen it since with all this Democratic leadership and Republican leadership.