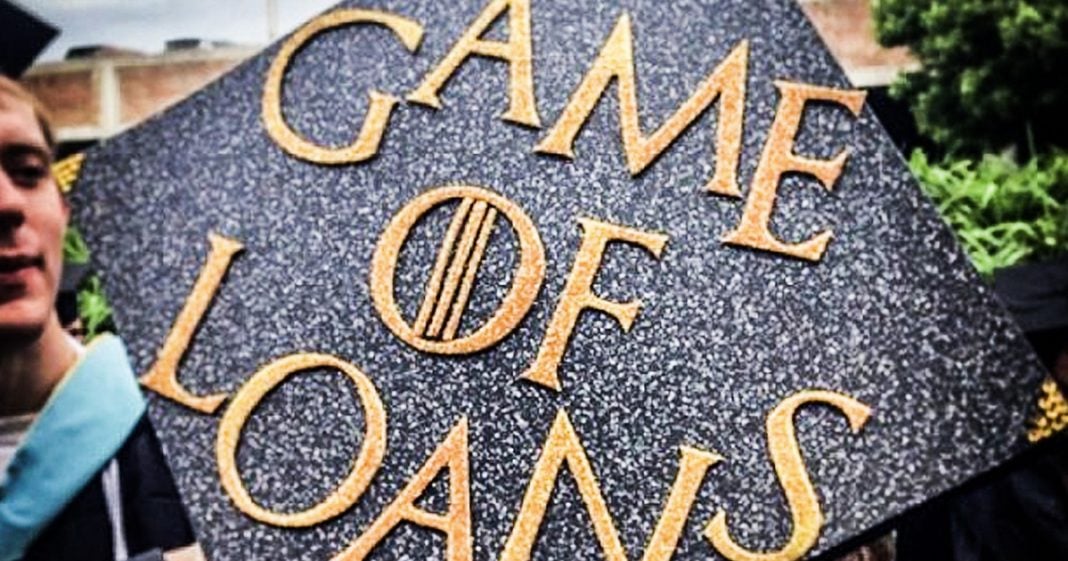 There is currently $1.5 trillion worth of student loan debt held by people within the United States, and as reports have been telling us for years, these debts are severely hindering peoples’ ability to live a comfortable life. But now new statistics tell us that 1 in 8 divorces are being caused by student loan debt held by one of the spouses, so the debt problem is now adding to the dissolution of marriages. This system has to change, and it has to change fast, as Ring of Fire’s Farron Cousins explains.

If you’re a big bank here in the United States then your life right now is probably better than ever. You just got some massive tax cuts, your profits are going through the roof, you’re being deregulated, so you don’t have those pesky government folks looking over your shoulder to make sure you’re not committing crimes. But for the rest of us that have to deal with these borderline criminal banking industries, life is tough, and it’s even tougher for those people who owe the one and a half trillion dollars worth of student loan debt that is currently held by United States citizens. One and a half trillion dollars spread among the population just so that we could get a college education because we felt it would give us a better life.

We were told it would give us a better life, get us better jobs. Yeah, take out a small loan, most of them are from the federal government, so it’ll be fine. Oh, but then the federal government starts selling them off to these private organizations or maybe the FAFSA, you know, whatever financial aid you applied for from the government, maybe it wasn’t enough, and you had to go and get a student loan from a private lending agency. Whatever the case, we’re at one and a half trillion dollars. And now a new report came out, according to CNBC, saying that one in eight divorces in the United States today are caused by one of the spouses owing significant and unmanageable levels of student loan debt. One in eight marriages are being specifically blamed on student loan debt. Now we already know that financial problems are one of the leading causes of divorce here in the United States. That’s nothing new, that’s probably not going to change. What has changed though is that one in eight total divorces, it’s not just financial problems, it is specifically student loan debt.

The reason this is so infuriating is because this is a problem that could easily be taken care of in the United States today. We could pass a law if we had members of Congress with any courage, or enough of them I should say, with any courage ’cause we’ve got a few that want this, but we could technically pass a law tomorrow and have debt-free college. It would be that simple. We could have public funding of university education, it would be that simple. We could pull a little bit of funding out of our massive, over-bloated military budget to cover it. We could repeal those massive tax cuts that we just gave to corporations. That would more than cover it every single year. We just refuse to do it. Why? Because we’ve got to give big banks more money. We don’t want them to lose any profits. We don’t want the millionaires and billionaires to not get their tax cuts that could be used to pay for this.

Honestly, at this point, for the love of God, we could be saving marriages by getting rid of student loan debt. But apparently keeping families together is far less important than allowing these big criminal bankers to make more money off of their ever increasing student loan debts. This is absolute and utter insanity at this point, folks. Again, we’re one of the only industrialized countries in the world that doesn’t offer some kind of publicly funded higher education. At least in some form. We give nothing. You’re on your own here in the United States, allegedly the wealthiest, most powerful country in the world. Unfortunately we’re using that wealth and power to boost our military, give tax breaks to millionaires and billionaires so that we don’t have the money left to take care of our private citizens. It is obscene, it is appalling and now we know that our love of money and love of big banks is quite literally tearing families apart.