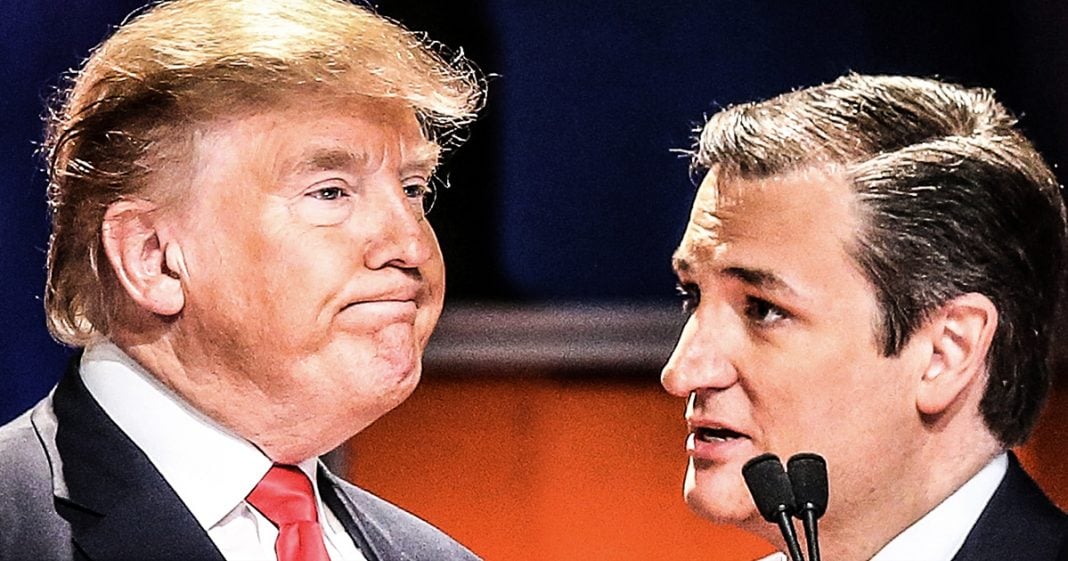 Ted Cruz is currently fighting for his political life in Texas, with challenger Beto O’Rourke closing in on him in the polls. Right now it is a statistical dead heat, so Cruz is now begging Donald Trump to come hold a rally for him to boost his numbers. The man that was constantly berated by Trump during the Republican primaries is now showing what a coward he is by asking for his help after he took his abuse for several years. Ring of Fire’s Farron Cousins discusses this.

Ted Cruz right now is fighting for his political life in the state of Texas. The latest round of polling shows that Ted Cruz, I believe he’s one or two points ahead of his democratic challenger Beto O’Rourke, a gap that he’s been closing week by week in the last few months. Now, given the margin of error for the poll, it is a statistical dead heat, because you factor in the margin of error and Beto O’Rourke might actually be a point ahead of Ted Cruz. So that’s a big deal in the state of Texas where you have a guy like Ted Cruz, been [inaudible 00:00:34] for years, this should have been a slam dunk, home run, touchdown of a campaign for him. No problem, just sailing right back to six more years in the Senate. Now it looks like this man might actually lose, which would be the biggest upset of the coming midterms.

So Ted Cruz obviously understands that his campaign is going down in flames and that he’s losing more and more each week, so he has reached out the one person that he believes can help him and that person sadly is the man who spent over a year making fun of him and his family and his wife, his father, and that person is Donald Trump. Ted Cruz has admitted that his campaign is in touch with Donald Trump and they’re trying to get him to come down to Texas to hold a rally for Ted Cruz.

Now, it’s important to remember, please, that Ted Cruz was mocked relentlessly by Donald Trump during the republican presidential primaries. During those debates he made fun of Ted Cruz. In other instances, he made fun of Ted Cruz’s wife’s appearance. He insinuated that Ted Cruz’s father, and he allowed this conspiracy theory to spread, that his father was somehow the Zodiac Killer. Or it was, excuse me, involved with the Kennedy assassination. The other conspiracy theories, that Ted Cruz looked a little bit like the Zodiac Killer, sorry.

None the less, and he may have been joking with that, the people may have been joking, but none the less this man insulted every branch of Ted Cruz’s family tree over the course of a year and a half, still mocks him whenever the opportunity comes up, but Ted Cruz is so desperate for help that he is willing to come to this man and say, “I know you’ve been horrible to me, I know you’ve been horrible to my family, but please, for the love of God, I don’t wanna lose my job. I’m willing to put all of that aside. Forget the horrible things you said about the woman I allegedly love, if you only can help me save my career.”

This is a kind of thing that tells you everything you need to know about Ted Cruz. He’s a guy that has no morals, he has no spine, he has no backbone and he has no loyalty to his own family if he is willing to reach out to this man, Donald Trump, to say, “The only thing that matters is my job. Saving my seat in the Senate.” For this reason alone, Ted Cruz should be defeated. Don’t even factor all of the horrible things he’s done legislatively, the horrible things he said as a human being. The fact that he has more loyalty to his seat in the Senate than he does to his own wife, that is more than enough for the people of Texas to see him as a scumbag that he is and finally vote him out of the U.S. Senate, because that is exactly what this kind of spineless coward deserves.