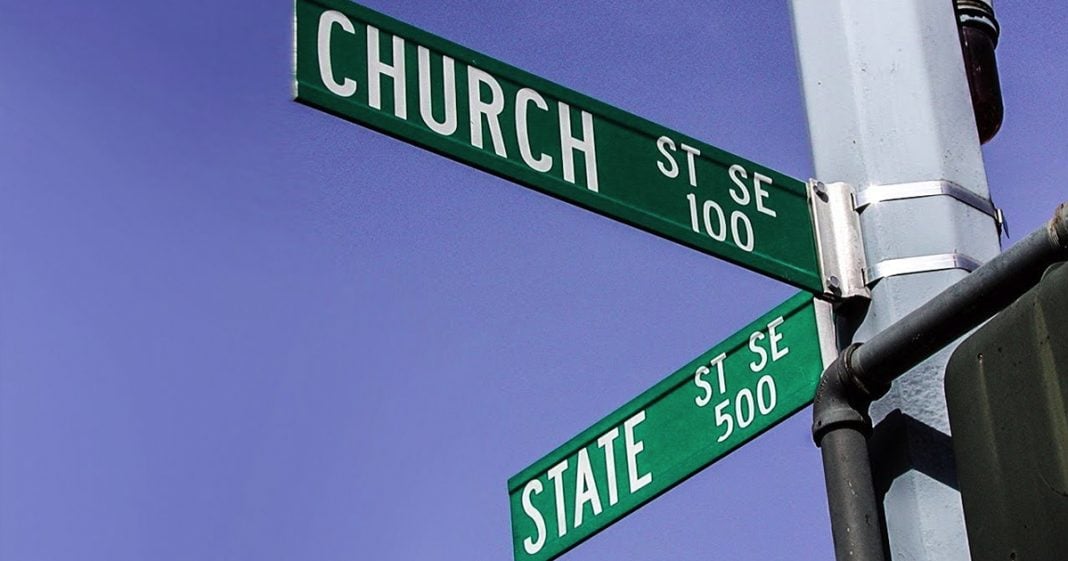 Another question we have comes from Alex Morett who says, “Since religion as a whole still propagates violence, intolerance, and hatred to this day, do y’all think we should abolish religion?” Ring of Fire’s Farron Cousins discuss this issue.

Another question we have comes from Alex Moret who says, “Since religion as a whole still propagates violence, intolerance and hatred to this day, do y’all think we should abolish religion?”

You can’t abolish a belief. If you could, everyone on the planet would accept the fact that climate change is real and that human beings are making it worse and that we have to do something about it immediately. Of course, in order to do that, you have to abolish the belief that climate change is a hoax. You can’t abolish a belief. I mean, we’ve tried that with education. We do, however, in the United States, obviously have the separation of church and state. The government cannot promote any specific religion.

Having said that, it’s not necessarily a religion problem, it’s an education problem. Religion, as a whole, is bad. Being religious yourself is not. If you choose to believe in god, or any other religion, fine. Nothing wrong with that. Go about your beliefs. But if you choose instead to use those beliefs to justify any kind of violence or hatred or bigotry, then you are the problem. If you choose to side with that religion over the evidence of your own eyes and ears, the evidence coming from the scientific community, then that’s a problem. But you can be religious and still say climate change is real and human beings are making it worse. You can be a Christian and still believe in evolution. There are plenty of those out there. It’s when you blur the lines, when you say that, no, science can’t be real at all because religion has to be real. Like, here’s a mountain of evidence, but here’s my little personal belief, and this thing is stronger than all of this. That’s the issue.

I grew up in the Catholic church. I was an altar boy for a while. I went to Catholic school in my youth for a while. Church every single Sunday, whether I wanted to or not, which, believe me, I did not. Every holiday, right there. It was awful. I hated it, but I believed it. But as you get older and you start questioning these things, and you start to wonder how can this be? Where’s the evidence of this? He built a giant boat that was the size of half a city? Surely we’d find something of that somewhere. I mean, if we can find ancient civilizations that are thousands of years old, why can’t we find something like that?

It’s always good to question things, and you can keep your faith and still question things, but it’s when we stop questioning and when we just put our blind trust in anything, whether it’s a politician of any party, whether it’s a religion, a faith, a belief, when we put our blind trust in anything, it will always run into problems and get us in trouble.