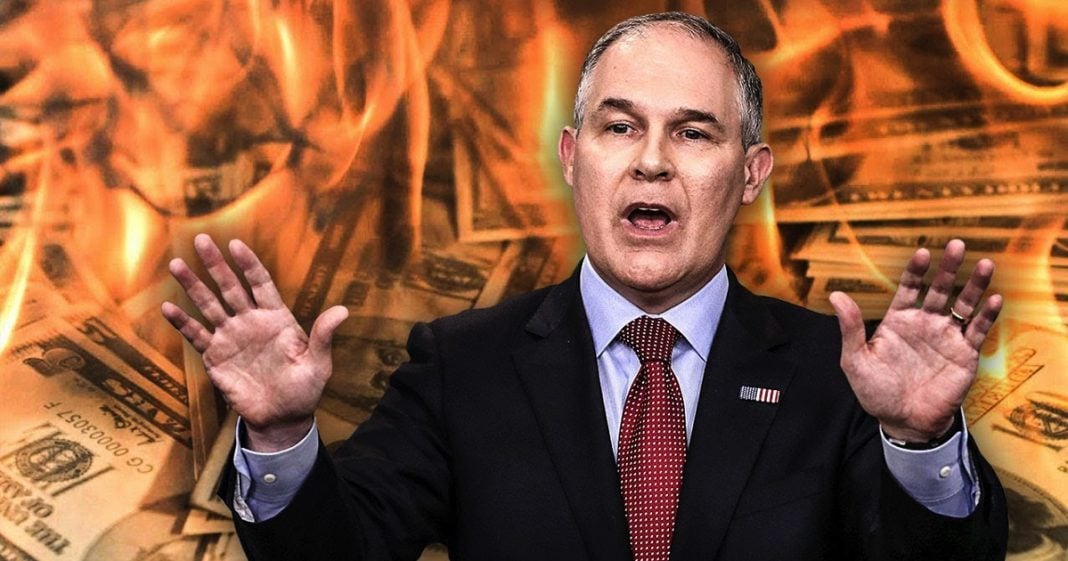 Our next question comes from resist4 who asks, “When the corrupt, like Pruitt step down why don’t they have to pay back our tax $ spent that wasn’t necessary or legitimate expenditure? Isn’t it what we the ppl would have to do if we got caught embezzling not to mention jail time?” Ring of Fire’s Farron Cousins discuss this issue.

Our next question comes from resist4 who asks, “When the corrupt, like Pruitt step down why don’t they have to pay back our tax $ spent that wasn’t necessary or legitimate expenditure? Isn’t it what we the ppl would have to do if we got caught embezzling not to mention jail time?” Here’s the issue with that. Yes, if we did it and we got busted for it and we went to court and then went to jail, we’d have to pay it back. That’s how that works.

Scott Pruitt has not been indicted. He has not been arrested. He has not been served, so at this point, legally he’s not required to do anything. Yes, there are still investigations going on, allegedly, into some of the crap he pulled while he was the EPA administrator. I hope that those investigations are actually continuing, but during his time there we know that the administration cut the funding for the investigative arm of the EPA. They weren’t even able to look at all of the crimes he committed and all the fraud and abuse in there because they didn’t have enough money. They were only able to look at all his travel up through the end of 2017. They couldn’t even factor in any of the 2018 stuff.

Scott Pruitt’s never going to be held accountable. He’s never going to have to pay this money back because they’ve starved the government to the point where it can not properly carry out investigations. That wasn’t an accident. This was done even before we knew about these scandals with Scott Pruitt. It’s a hallmark of the Republican government, more importantly, a hallmark of the Trump administration itself. They hate the government, but more importantly, they hate people looking at them to see if they’re doing anything wrong, because they are corrupt as hell.

I can say that because there’s no one in this administration that could credibly refute that. If you look into the history, look at what these people have done while on the job in the last year and a half, Betsy DeVos, Scott Pruitt now replaced by Andrew Wheeler who is just as bad. Ryan Zinke, Rick Perry. These folks are really out there doing the worst that they possibly can for the United States. They’re ripping off tax payers. They’re destroying the federal government from the inside and they’re not ever going to be held accountable.

Scott Pruitt will never have to pay back a single dollar that he took or that he spent without authorization. Betsy DeVos is going to be able to keep the millions of dollars that she is making by enacting policies that personally benefit her. Same thing with Trump. He will never have to pay back a dime of that, even though he is getting even wealthier off the backs of the American taxpayers. That’s his money now and the sad thing is, that’s his money now. We won’t get it back no matter how much fraud we can prove, no matter what happens with these investigations. It’s not coming back. We got screwed and we got swindled.

It’s not fair but hopefully the public takes this as a lesson, that they go forward from this point and say, “You know what, I’m not just going to vote for the guy who says he’s against the establishment of the Republican Party because that’s, they hate that.” No. This guy was a con man. He conned you. He conned the Republicans. Now he’s got the Republicans going out there saying, “You can’t associate with the Koch brothers because they said something mean about Trump.” I mean, it’s crazy town. It’s crazy town and Trump is the mayor of crazy town, but as long as he’s there, as long as Republicans have any say, these people like Pruitt, Zinke, DeVos and Trump himself, they’re never going to have to pay back any of the money they’ve taken or these ill-gotten gains that they have managed to received from being in the positions of power.

Then, when we finally do get Democrats to take over, they’re probably going to do the same kind of Obama crap that we saw in 2009 when he took office. They’re going to say, “You know what? It’s better to look forward than it is to look backwards. We’re not going to, you know, too much to do there so let’s just move forward and forget about it.” Let’s not. Let’s not forget about it. Let’s always remember the party of corruption. Let’s remember these swamp creatures that Donald Trump put into the Oval Office, into the Cabinet and into these powerful agencies. That’s what we should always remember about this presidency. Even at the end of this, if nothing comes from the Mueller investigation or any of the other investigations, let’s always remember the millionaires and billionaires that he packed his Cabinet with because he thought they could all make a few quick bucks and then skip town.