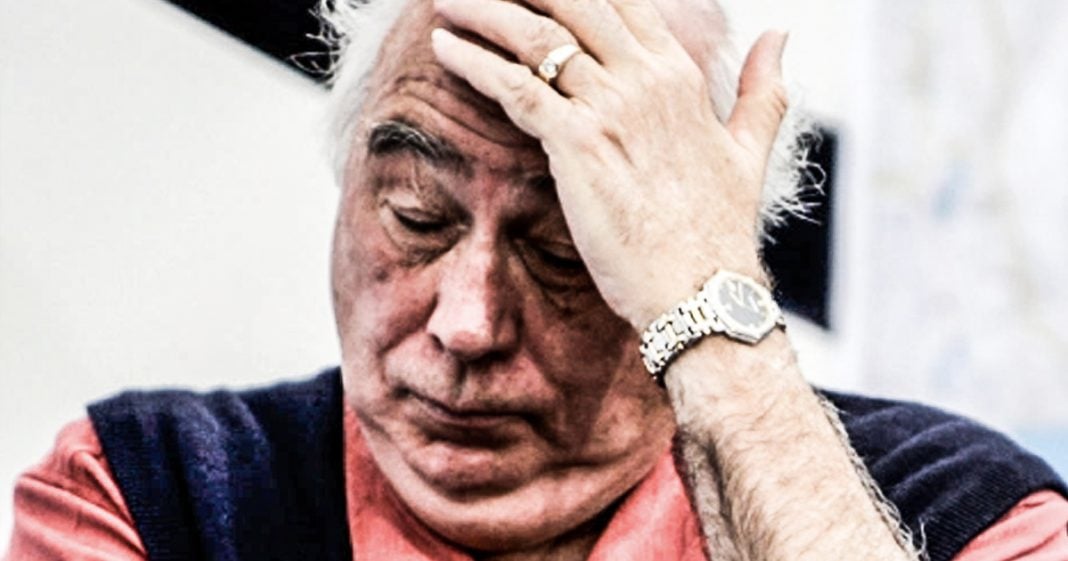 Robert Murray, the head of the coal company Murray Energy, has been secretly paying the legal bills of a group of anti-wind farm activists. These payments were revealed during depositions for a lawsuit involving the anti-wind farm group, and it shows just how sneaky and deceptive these leaders of the fossil fuel industry can be. Ring of Fire’s Farron Cousins discusses this.

Residents in Ohio are suing a wind energy company because the wind energy company wants to build an offshore wind farm in Lake Erie, about eight miles out from the shore. Eight miles from the shore, trying to keep it far enough away to where it’s not gonna ruin anybody’s view, it’s not gonna be in your way for fishing. They just wanna build clean energy so that states like Ohio, which primarily use fossil fuels and coal for their electricity generation, so that we can get to cleaner fuels. That’s the purpose of this wind farm, but some citizens, some expert witnesses in this lawsuit think that it’s a horrible idea, “It’s gonna ruin the lake. It’s gonna ruin my view. It’s gonna ruin my house. It’s probably gonna kill some birds when they fly into the turbines and that’s just awful.” And recently within the last few days, these people filing the lawsuit figured something out that they never even imagined. See as it turns out these people hadn’t been receiving any legal bills for this lawsuit that they had filed and it’s because those legal bills were being handled by Robert Murray, the CEO of Murray Energy.

How nice of him, right? You got this big energy exec, I believe his name is Robert Murray. I could be wrong about the first name. But anyway the CEO of Murray Energy comes out and he’s paying all these people’s legal bills, the expert witnesses that they had to talk about how bad the wind farm was. They were being paid by Murray Energy and Murray Energy happens to be one of the largest still operating coal companies here in the northeast. Isn’t that great though? What a nice fellow! He showed up, he saw that these people were trying to defeat a clean energy project and took it upon himself to pay their bills without even telling them. The people didn’t care, they weren’t even all that shocked. They were just like, “No. I never really thought about who was paying my bills. I just wanted to defeat this project because I hate progress and clean energy and breathing clean air.”, because that’s what’s at the heart of this.

It’s not just that this jackass from Murray Energy was paying these people’s legal bills to defeat a project that could hurt his industry that needs to be hurt. It’s the fact that we’re still having this debate today in the United States about whether or not we should build more clean energy facilities for generation. Should we have more wind farms? [inaudible 00:02:37]. Should we have more solar farms? [inaudible 00:02:40]. Should we just keep using coal? Yeah, probably. We’re that stupid collectively as a country that we’re the only idiots on this planet still having that conversation. Do you realize that folks? We’re the only ones. We’re the only country that has a single political party whose platform is to deny the existence of climate change or to tell us that it’s no big deal. The only country on the planet that has a political party that stands for that and that is the republicans. But now with this guy from Murray Energy footing the legal bill for these folks, this case is gonna continue to go all the way and unfortunately based on some of the judges that we have up there in the northeast, it’s very likely that this project will get defeated.

There are some hardcore, pro-corporate judges appointed by pro-corporate republicans up in the northeast where this case would be tried. And if it comes to that, then yeah, it’s pretty obvious that this wind farm that they’re wanting to build on Lake Erie just to supply the citizens of Ohio with a little bit cleaner energy is going to be defeated. And at the end of the day if that happens, you can thank the CEO of that coal company who’s gonna get even richer by defeating this project and by poisoning countless American citizens with his continued increasing emissions from the burning of fossil fuels.