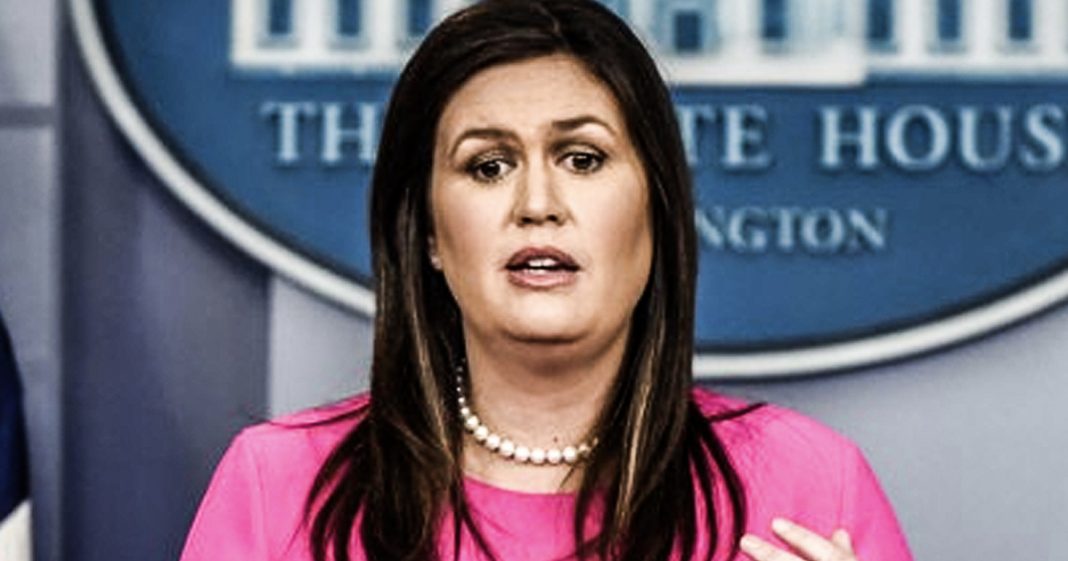 This past weekend, conservative columnist Jennifer Rubin with The Washington Post said that Sarah Huckabee Sanders should be blacklisted from working anywhere near the media once her time at the White House comes to an end. Rubin is not the first Republican to turn against Huckabee Sanders, as even some of the folks at Fox News have questioned her authenticity and credibility. Ring of Fire’s Farron Cousins discusses this.

Last weekend on MSNBC’s AM Joy, Washington Post conservative columnist Jennifer Rubin had this to say. She said, “Sarah Huckabee Sanders is so concerned that people aren’t nice to her and people like me think that, not that she should be harassed, but that she should be shunned. The reason is that she lies. She attacks our free press and no respectable employer should hire her after this term, also no university and no news outlet. She has lied and she has endangered the lives of reporters and that’s why she should be shunned, not harassed, shunned.” That was coming from a conservative. To be honest here, Jennifer Rubin is not the first conservative to speak out against Sarah Huckabee Sanders. We’ve seen it from folks on Fox News. We’ve covered that here. We’ve shown those clips. They’re getting tired of her. They understand that she lies constantly and even they can’t spin her lies anymore.

We’ve seen other conservative columnists, conservatives online say that they are just sick and tired of this woman lying all the time. I happen to support Ms. Rubin’s plan here. She should be shunned. When Sarah Huckabee Sanders leaves the White House, she should not be able to find gainful employment anywhere in the United States of America and that’s not something that I wish on anyone, but unfortunately that is what she deserves and that is what should happen because Rubin is right on all these assessments. She lies to us everyday. She has endangered the lives of reporters across this country. She does it without even caring, the callousness that she has when attacking these people calling them fake news and then almost comes to tears when she talks about that one time she didn’t get to eat dinner. Come on. This is absolutely obscene.

What this woman, Sarah Huckabee Sanders, is doing to this country on a daily basis should prevent anyone, regardless of your political affiliation, from ever wanting to hire her for anything. This woman is not fit to be a server at an IHOP, let alone acting as the mouthpiece for this disgusting administration. But what’s going to happen because we’ve seen it happen too many times is that she’s going to get a cushy gig probably at Fox News. They’ll bring her on as a contributor where her father, who is just as disgusting and vile as she is, is also a contributor. Maybe she’ll write a few books. Maybe she’ll go into conservative filmmaking because there’s some money there. There’s no success but there’s certainly some money. Or at the very least she’ll get a cushy job at a Republican think tank where she never has to be seen by the public. She can just help run things behind the scenes.

Honestly, if that’s the best we can get where she just stays out of the public eye, then I guess that’s good enough. But what should happen, as Jennifer Rubin pointed out, is that this woman should be shunned by every employer in the United States.