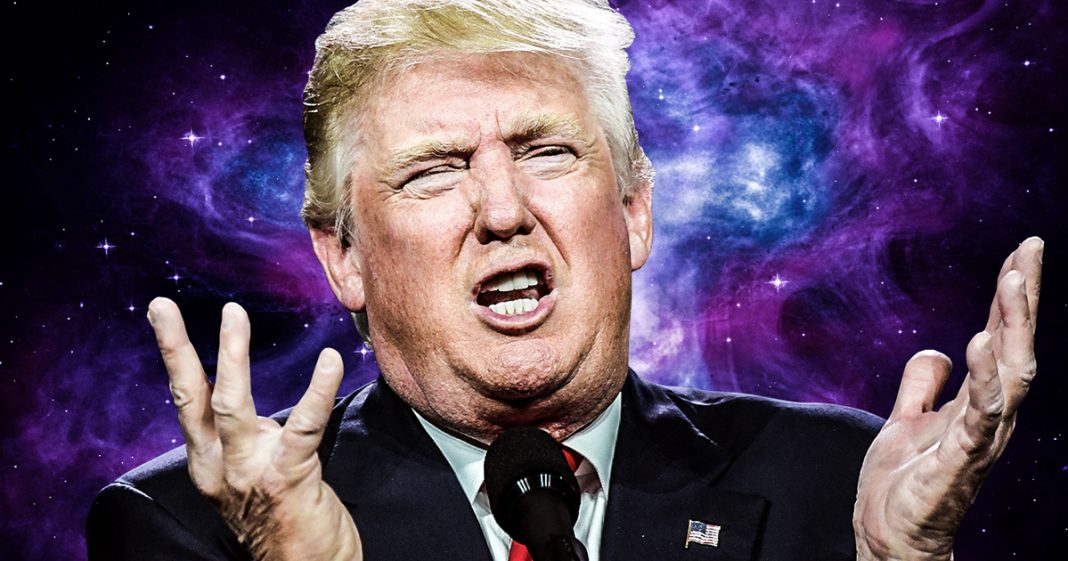 The Trump administration has made it official – The Space Force is absolutely happening, and they hope to have it somewhat operational by 2020. As Democratic Senator Brian Schatz pointed out, there aren’t any Republicans with enough courage to tell Trump that this is an incredibly stupid idea that will waste billions of dollars (at least) that could better serve this country if directed elsewhere. Ring of Fire’s Farron Cousins discusses this.

Well, it’s official ladies and gentlemen. Vice President Mike Pence announced it yesterday. Donald Trump tweeted it. We are officially starting the Space Force. So we’re going to have a space military, right? The administration thinks it’s a good idea, Mike Pence thinks it’s a great idea, Trump loves it. The public, eh, not so much, except for a few hardcore right-wingers who believe that we’re already falling behind on the space military front.

In fact, that is what democratic senator Brian Schatz from Hawaii tweeted out shortly after Mike Pence made his little announcement. He said, “The VP just announced a new military branch, a Space Force, because no republican is willing to tell POTUS it’s a dumb idea.” He’s 100% right.

We need these republicans who currently hold the majorities to maybe walk up to Donald Trump and say, “Hey, this is dumb.” You don’t even have to give en explanation, I think everybody understands how stupid this is.

At a time when the City of Flint, Michigan still doesn’t have clean water because it’s contaminated with lead, and now it’s full of legionellae bacteria, which is deadly, the island of Puerto Rico, a U.S. territory that we are responsible for, is still in shambles, $1.5 trillion worth of student loan debt held up among American citizens, people are losing their homes in foreclosures. Yeah, the economy appears to be doing great on the surface, yet student loan debt, healthcare costs, cuts to social security, Medicare and Medicaid are leaving people in financial distress.

But yeah, let’s go ahead and waste a few hundred billion dollars, and given the scope of it, probably a few trillion dollars, creating the U.S. Space Force, rather than spending that money to, I don’t know, do any of the things I previously said. Or hey, how about we fix our crumbling infrastructure?

Remember when Donald Trump was running for office and said he was going to do that? I mean, that was a great plan. He said it several times since being sworn in, and then has literally done nothing about it. Maybe instead of building a Space Force, we can start working on earth roads and get those fixed. Doesn’t that seem like a smarter idea?

Here’s the kicker. Trump says that the Space Force is going to be up there and ready to go by 2020, so we basically, we’ve got like two years at most before we actually have a Space Force. So here’s why he’s doing it. He knows that he is not going to come up with any legislative accomplishments that are going to bear his name.

He’s not going to have a Trumpcare like Obama has Obamacare, and his name will live on forever, so he wants to create this department of the military so people throughout American history, for however long this country lasts at this point, will remember his name, and every time you look up in the stars and you see those space ships with the American flag on them, you’ll think of the name Donald Trump. This is a massive multi-trillion dollar vanity project that nobody other than the president himself and his vice president seems to want.